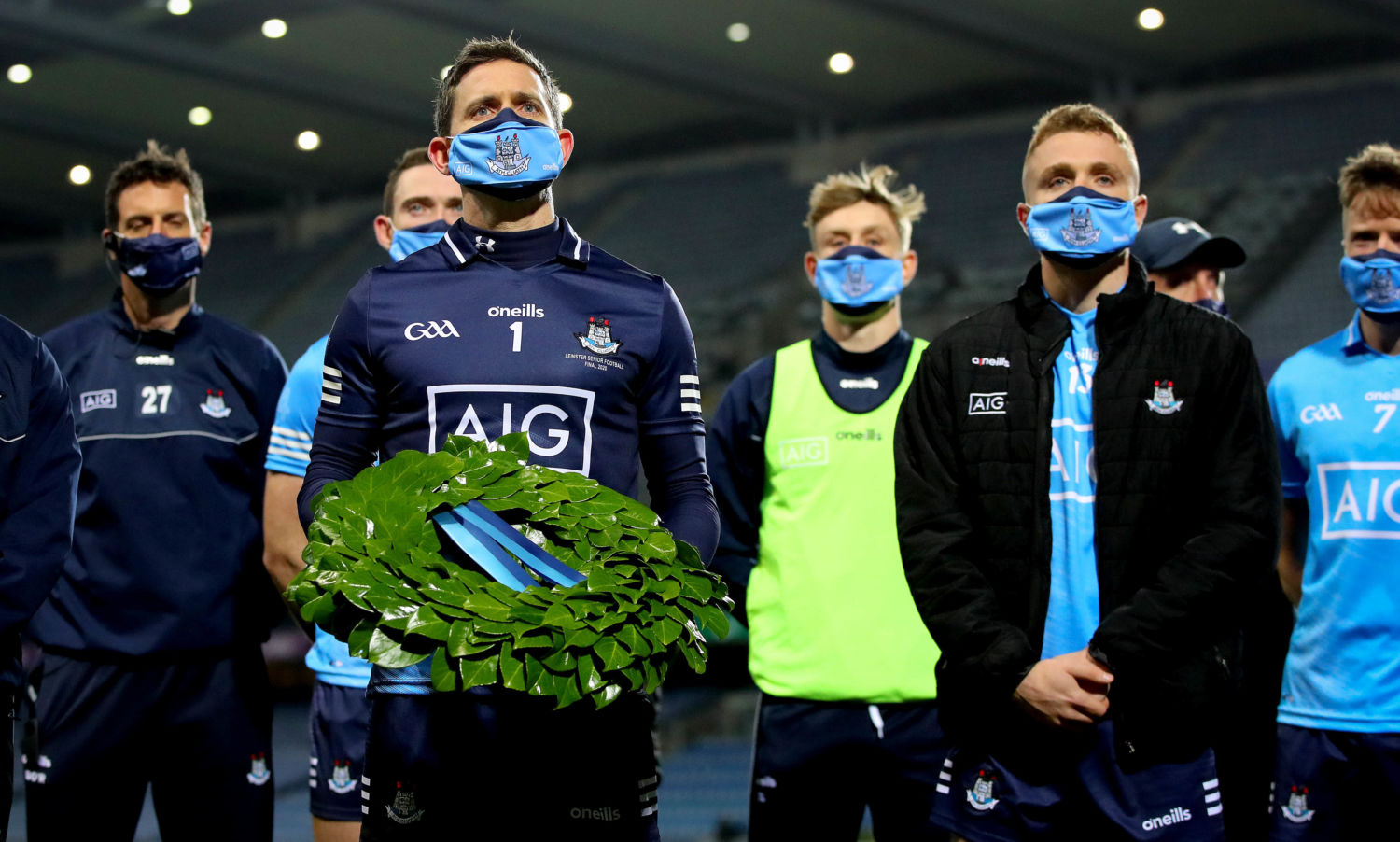 So it turns out that the all conquering Dublin footballers aren’t whiter than white after all, much to many people’s surprise. Photos: Inpho.

How ironic is it that we found out that the Dublin football team isn’t whiter than white like we thought (or were led to believe) they were on April’s Fool’s Day of all days?
The first reaction of most people to the front page story on the Irish Independent, including Kerry great Eoin ‘Bomber’ Liston, was that it was the Indo’s attempt at an April’s Fool’s gag. But an email in my inbox a few short hours later from Croke Park suggested that it was definitely a true story.
The Croke Park statement read, “It is with frustration and extreme disappointment that the GAA acknowledges reports today of a potential breach of both our own Covid guidelines and those of the Government relating to the restrictions in place around team training.
“Less than 48 hours ago, the Association reiterated its commitment to these current guidelines and called for continued compliance in the weeks ahead. The GAA will pursue the allegations with the units in question at the earliest opportunity and will invoke any necessary disciplinary processes as appropriate.”
My first thought, I must admit, was…there you go now, I knew they weren’t as innocent and as pure as they and certain elements of the media have led us to believe over recent years. That was quickly followed by….how stupid are they? The Malahide Road? Really? It’s hardly the Dublin mountains or any back of beyonds pitch that they might have had a slight chance of getting away with it.
To be honest it was almost as ridiculous as the Cork footballers training on Youghal beach but hopefully the Dubs will accept their punishment (that we’re still waiting for, after the Dublin county board came out straight away and banned Dessie for 12 weeks), whatever that will be, like men and not make themselves a laughing stock by appealing it, like the Cork football management. I don’t think I’ll ever get my head around that. Like John Mullane many years ago, put your hand up and admit you’re wrong, take your punishment like a grown up and move on.
I think like everyone else the fact that makes it more incredulous is that it’s not that they need the training? They haven’t lost a match in like two decades or something and are 4/6 (not a bad price) to retain Sam Maguire in 2021 before a ball is kicked.
What punishment will they get? Now that will be interesting. Ronan McCarthy got a three month ban for Cork’s transgression but this is Dublin and that will turn the heat up on Croke Park to get it right something desperate, with the whole of the GAA world (and beyond) watching on.
In one way I’m glad that this Dublin team, who are a magnificent football team and have carried themselves excellently over recent years, aren’t as squeaky clean as we believed. No team gets to where they’ve got to without bending a rule or two or having a nasty side to them. Monaghan followed them last week in getting caught and surely now the rest will hold off until they’re allowed back in training next Monday. Watch this space. 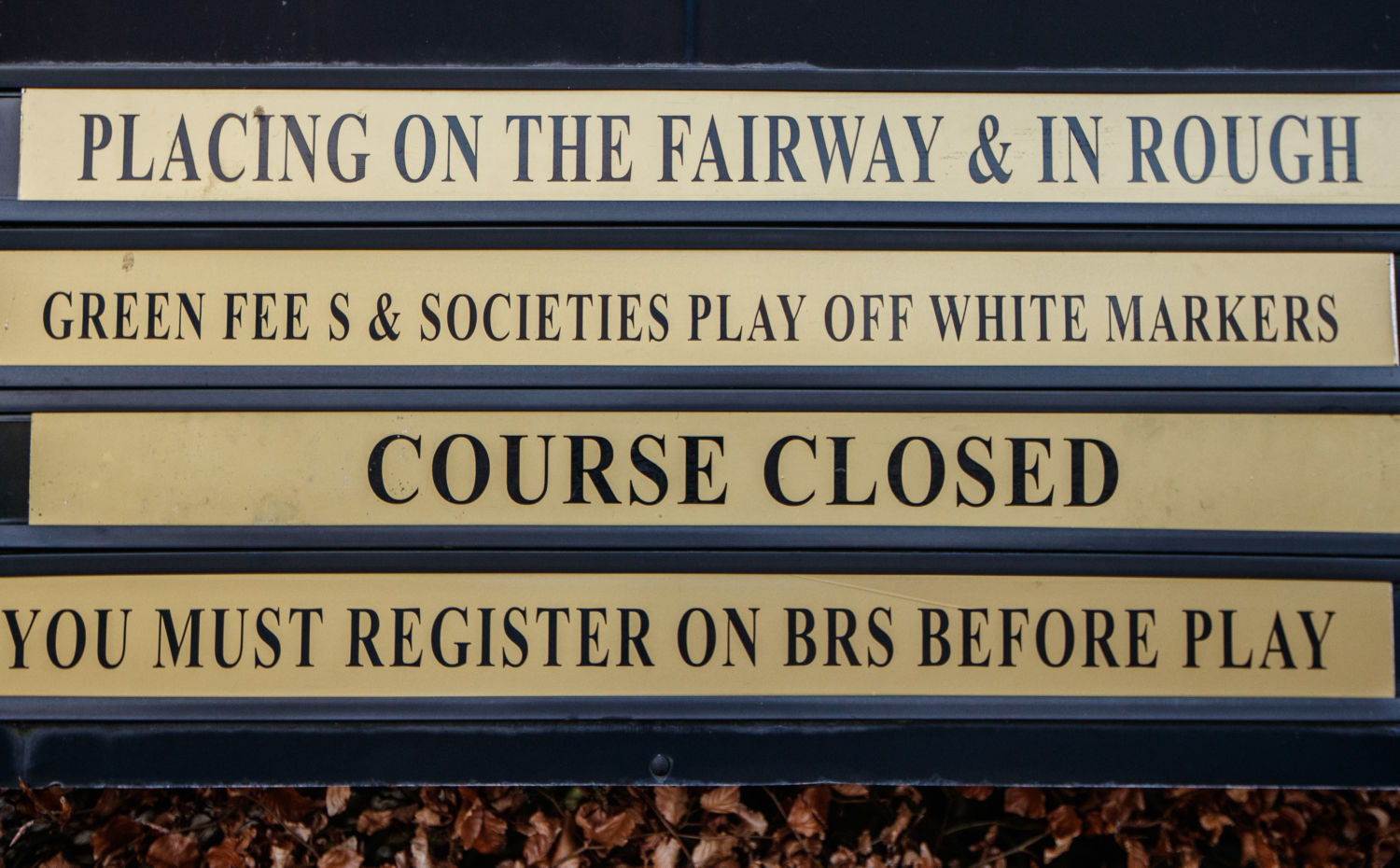 Of course it was a good week for some sports with the latest Government announcements but not so good for others. Inter-county GAA training and then underage training for all sports (outdoor) is great news, as is the return of golf and tennis towards the end of the month.
I’ll probably go into it in more detail another day but for the life of me I can’t understand why golf has been banned for so long. I don’t get into the pastime of government bashing on every decision they make and don’t make but I just don’t get the golf decision. Two people out in the open air playing on tens of acres of land and most likely never getting within ten metres of each other, never mind two. I think it’s been especially difficult on retired people and teenagers who are two very large cohorts in the world of golf. Anyway, at least the wait is nearly over. I hope when it returns it will return for good. 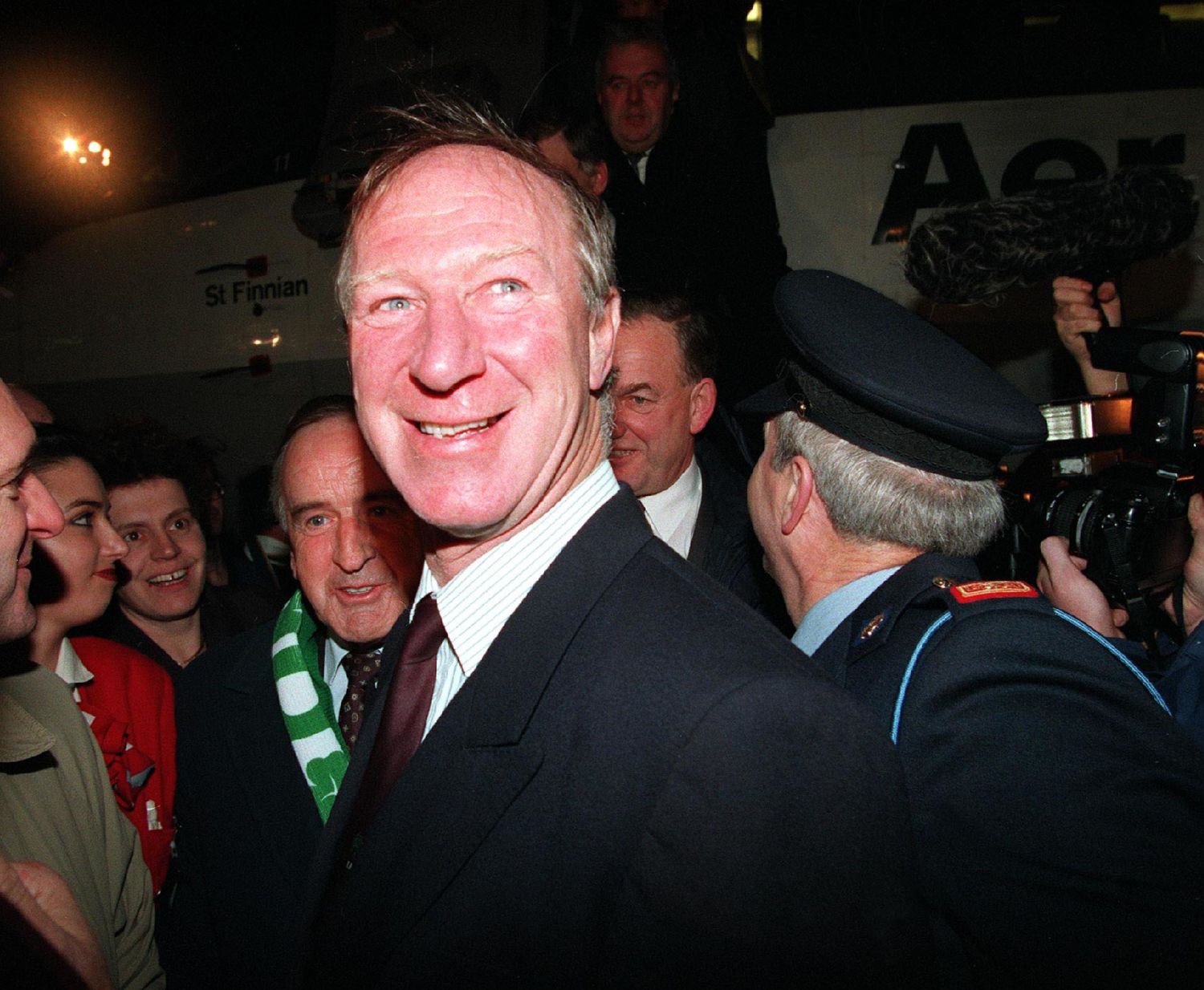 It was an unlikely love affair but Ireland’s adoration of Jack Charlton and what he did for Irish football will live on long after his death.
I know I’m biased as I’m a self confessed sports fanatic but there is something extra special about a brilliant sports documentary, especially if the story is a good one and the Finding Jack Charlton documentary that aired last week on Virgin Media One and BBC Two did that it spades.
Gabriel Clarke’s documentary is nothing short of a masterpiece. Up there with Senna and When We Were Kings, Maradona and so on. If you missed it then you have to check it out. It’s brilliant.
Of course it’s heartbreaking at times as it follows Jack Charlton in his every day north of England life as he suffers from dementia in the midst of his family and it highlights the divide between Jack and his ‘kid brother’ Bobby (now too suffering from dementia) but overall it is just glorious.
It’s even more glorious because it brings us never before seen footage from the glory days of Jack’s ten years as manager of the Republic of Ireland football team. Like the sing song around the swimming pool in Rome after the boys in green bowed out of the 1990 World Cup at the hands of the hosts.
Watching the highlights of those games and the thoughts of the heroes of those great days like David O’Leary, Pakie Bonner, John Aldridge, Paul McGrath, Niall Quinn etc it brings it all back to you just how special a time that was not just for Irish sport but for Ireland as a country.
I sometimes cringe when people talk about the impact of sport on counties or countries in everyday life, like the notion that that team’s achievements brought about the birth of the Celtic Tiger and all that….but in this example, I kind of agree.
The scenes of the thousands lining the streets of Dublin to welcome the team home after Italia ’90 are incredible and the best thing about all that footage is that I remember every one of them like it was yesterday. I was 12 in 1990 and I absolutely lapped it up. I would have been more of a GAA head than a soccer head but everyone was just swept up in the glory of Euro ’88 and Italia ’90 and to a lesser extent USA ’94 – although Paul McGrath’s never to be forgotten performance in the Giants Stadium, New York on that famous night in 1994 will always live in the memory.
Now too will the moment in this documentary when Jack is sitting at his kitchen table watching the footage of those times that was to be used in the film. For most of the time there is a listless, lost look in his eyes but on one beautiful occasion he comes to life when he says, ‘Paul McGrath’ looking at the camera and smiling a warm and loving smile. Absolutely heartbreaking but wonderful.
As was the way the aforementioned Paul McGrath spoke about his former manager the affection he still has for him to this day. They way Paul continued to try his patience but Jack, although often tempted, never gave up on him. You could tell that there was a fatherly feeling between the two men and it was beautiful.
Of course it also brought up again the awful battles in life that Paul McGrath, an absolute world class player, from a child to this present day. He seems to be in a good space now and I really hope he is. I idolised him growing up. He was a magnificent player, not only with Ireland but with Aston Villa and Derby years and years after he really should have been retired due to a combination of hard living and extremely dodgy knees. One of Ireland’s most loved and revered sports people, no doubt about that.
The other things I couldn’t help but think of during the documentary was the quality of players with had during the Charlton era. What a group of players we had. I know it’s unfair to compare generations but if you look at the calibre of player we had then compared to now….no comparison and that’s not being harsh on the current players, it’s just a fact.
Pakie Bonner, Kevin Moran, Steve Staunton, Ray Houghton, Paul McGrath, Ronnie Whelan, Kevin Sheedy, John Aldridge, Andy Townsend, Denis Irwin, Roy Keane and on and on and that’s not even including the likes of Liam Brady, David O’Leary and Mark Lawrenson, who also played under Jack but never starred for him. 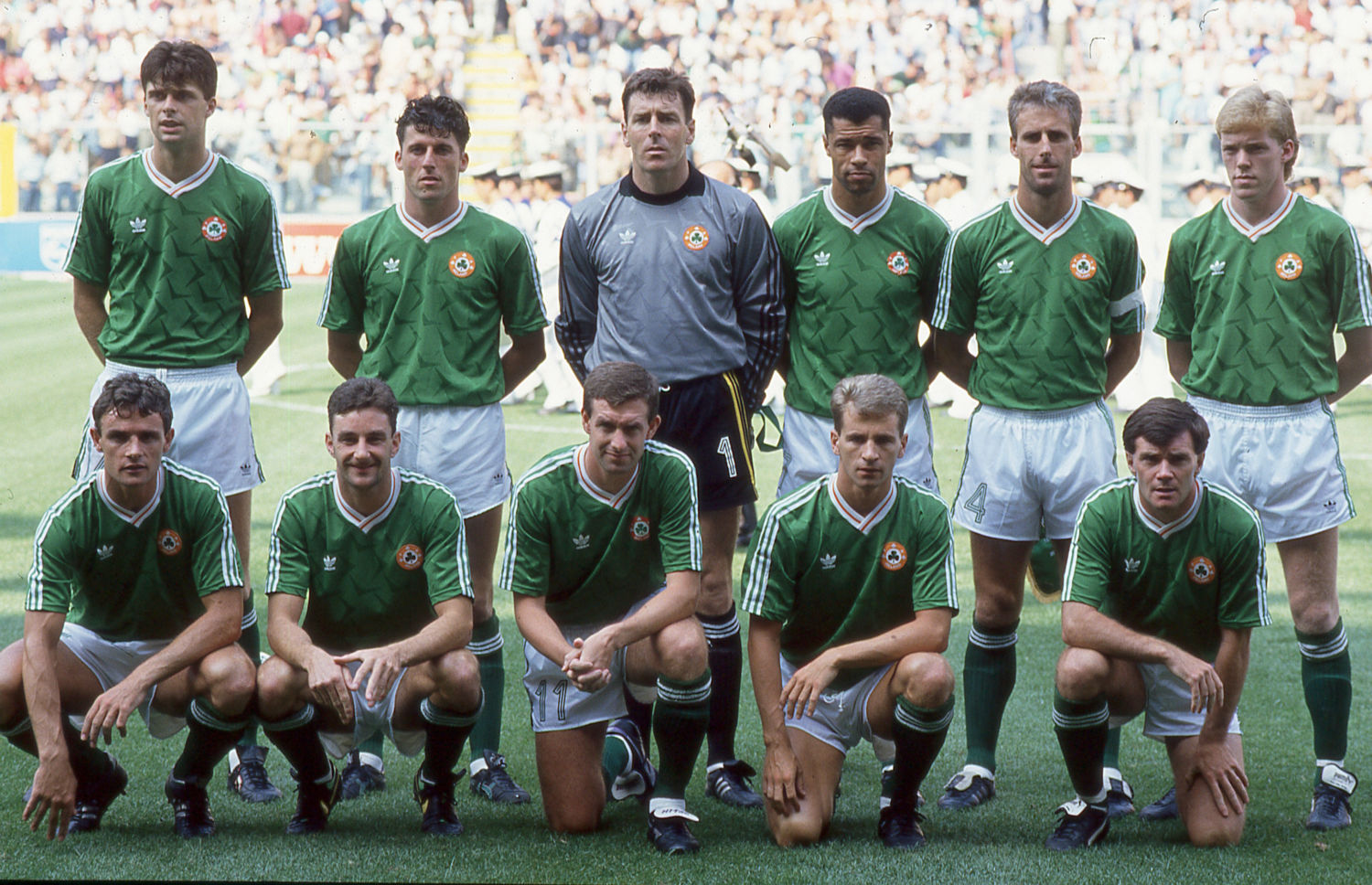 The Finding Jack Charlton documentary hammered home the quality of players that Ireland had during the Charlton era.
Of course that brought another point to my mind. Did we miss a trick in that era? Would we have been as or more successful if we played the likes of Brady and O’Leary and let the likes of Whelan and company play ‘proper football’ like they were at their hugely successful clubs, and not the ‘Put Em Under Pressure’ game that Jack loved? We will of course never know but definitely check out that brilliant documentary if you haven’t. It also raised way over a million euro for the Alzheimer’s Society of Ireland which is fantastic.