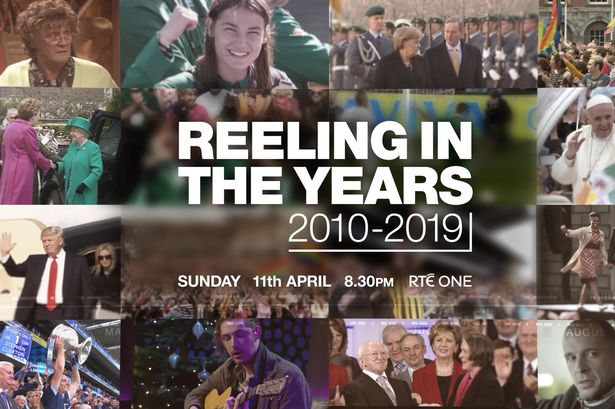 OUR national broadcaster doesn’t always get the credit it deserves. RTE often comes in for criticism, much warranted but occasionally they hit the jackpot and do something rather wonderful. To that end, it was a real shot in the arm, no pun intended, to hear the announcement recently that the marvellous folk behind the now legendary series ‘Reeling In The Years’ had created a whole new set of memories for us to enjoy.

This time round the flashback spotlights the period between 2010 and 2019.

The sixth season kicked off on Sunday and as with the others, I’ll be hooked. I’ve seen my fill of home-grown content over the years but this show is just so good and deserves its success to date.

Nostalgia sells, but Reeling excels and hats off to the production team who’ve brilliantly, skilfully and respectfully compiled the best and worst, the happiest and saddest days of our history on this island, north and south. It’s funny that no matter how many times it airs, I almost feel compelled to watch again and even now I keep noticing certain things I have missed last time out.

‘His poor father almost collapsed onto the coffin in poignant moments that make for very uncomfortable viewing. The memories come thick and fast’

I’ll never forget the horrific Miami Showband massacre in the summer of 1975, documented in that year’s episode. The scenes at the graveside as lead singer Fran O’Toole was being buried are heartbreaking to say the least. His poor father almost collapsed onto the coffin in poignant moments that make for very uncomfortable viewing. The memories come thick and fast. The blending of the light and shade though for me, make the show the jewel that it is; the tragic mixed with the humourous.

Johnny Logan’s Eurovision heroics, Charlie Haughey brazenly telling the nation we were all living “beyond our means”, and Mike Murphy guzzling champers on Concorde. Peter Ustinov regaling Gaybo on the Late Late with his tale of walking in to the women’s toilets at Shannon Airport, blissfully unaware that Mna was not in fact the Irish plural for Men. Bob Geldof lambasting the status quo and berating the shoddiness of how things were done in Ireland in the 70’s and 80’s and railing against the authorities for banning the Boomtown Rats from performing an outdoor concert here. Riveting stuff and no soap opera eye candy, all real and part of growing up and being Irish.

The pop hits of the day add to that sense of reliving “the good old days” and transport us right back to a particular place and time. The soundtrack is cleverly in step with the scene it fits alongside and the producers played a blinder in synching the topics with the tunes. Some people probably love the show purely for the chart hits they roll out on each episode. Take the 1974 choices. A few belters in here. From Abba, Bachman-Turner Overdrive, Ken Boothe, Rory Gallagher, The Hollies, Tony Kenny, New Seekers, Status Quo, The Three Degrees and Barry White; pure oldies heaven.

You can’t help smile or even chuckle at some of the adverts from ‘back in the day’.

Smash Instant Potato mix, Guinness Light (now there was a giant flop) and those trusty cigarettes.

Harp Lager with the lovely Sally O’Brien and the way she might look at you and Slim line tonic working its magic on ladies figures so much it was apparently driving the red blooded males of the 70’s to distraction. Advertising was quite different then.

Certain episodes shone a light on how bleak things were in Ireland in many parts and how sad to see so many having to board the boat to England with little or no prospects of finding any work here. In one scene, the footage of the departing jobseekers is wonderfully accompanied by the only too appropriate Gerry and the Pacemakers song ‘Don’t Let the Sun Catch You Crying’.

I’m sure we’ll all have vivid recollections of the 10 years featured in the latest series. Sport is always well documented and doubtless our attempts in the Déise to land that elusive Liam McCarthy cup will feature along the journey. It’s probably my one regret that the 80’s series didn’t include any footage of the FAI Cup success for Waterford at Dalymount Park in 1980. That would be well worth re living every time it subsequently aired. Alas, one that got away. That Brian Gardner header alone would have upped the ratings.

I know some compilation DVD’s were released but they are edited and don’t contain the entire episodes. The Reeling in the Decades boxset features the 70s, 80s and 90s in the set but not the series in full due to copyright issues and such. RTE has in fact stated that securing, “video clearance” for every clip and song would be just too expensive, hence the scaled down versions available. Seemingly, RTÉ contemplated launching a version with purely the images and music that they owned the rights to, but thought better of it saying “the programme would only be half as good then, it wouldn’t be anything like the shows that went out on air, and we’d end up disappointing people”.

Fair enough, why cheapen a gem of a show. It’s all or nothing in my view. You really couldn’t imagine tampering with any of it. It’s too special. Part of our heritage at this stage. So popular has Reeling been with the good folk of the nation, it’s been IFTA-nominated and has been voted the ‘Most Popular Home-Produced TV Show Ever’ in an RTÉ Guide poll of Ireland’s Top 100 TV Shows.

The crew who put so much work and love in to the programmes deserve huge kudos and I hope generations to come will make some sense of what on earth we got up to here in Ireland over the years following 2010. Most of us who lived through it are still baffled. It’s a bit like welcoming back an old friend.

Long may Reeling in the Years reel in the viewers. I heard somebody once suggest it could just as easily be called Reeling in the Tears. If you’ve ever watched for any longer than 10 minutes, you know that’s not wide of the mark. You’d need to have a heart of stone to be unaffected. I’m really looking forward to the next instalment. Thank you RTE.