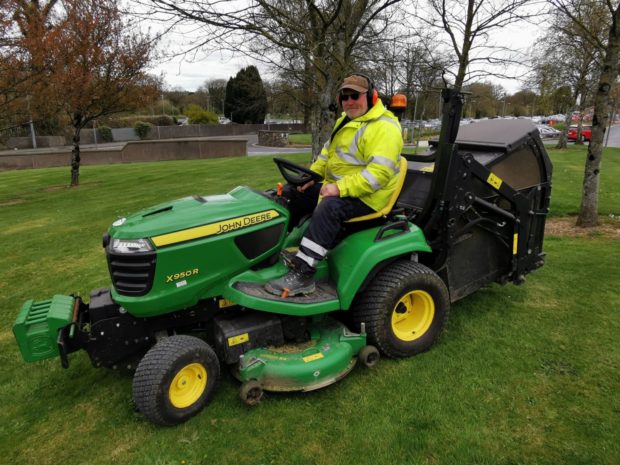 SAT at home following my short drive to University Hospital Waterford (UHW), having interviewed Donal O’Keeffe, a few things struck me as I listened back to our chat and read through the transcript.

For the purposes of this slot, I spoke officially to UHW’s principal Groundsman for 41 and a half minutes. Thanks to some evident semblance of shared humanity, we actually chatted for almost two hours, zig-zagging between his native Tramore, Waterford, Carrick-on-Suir, Ohio and Copenhagen.

The interview audio, carrying the beeps and grinds of the new mortuary’s ongoing construction in the background, was also pleasantly punctuated by our laughter, a sound none of us ever hear enough of.

Donal, standing next to his gleaming John Deere X950R ride-on mower, held court alongside the old lodge at Ardkeen, exuding the air of a man at peace with life and utterly enthused by his work.

Donal, married to Maire, with whom he has two children, Donal and Amy, is responsible for the maintenance of the grounds within UHW’s 33-acre campus, a job he was appointed to on a full-time basis two years ago. “That’s when I was adopted here fully,” he giggled, “but I’ve been a contractor here for 20-odd years at this stage.

“You cannot find five minutes to yourself on this site. It always starts with litter collection and bin emptying every morning, then you follow through with cutting the grass. You’re working on flat areas, then areas with slopes to take into account. The grass grows stronger in some areas here than in others – just here behind you (adjacent to the ‘first’ hospital roundabout on the Dunmore Road) is a lot stronger than anywhere else on the site and then it’s much weaker at the back of the building where the nurses are trained so there’s a lot of juggling to do.” 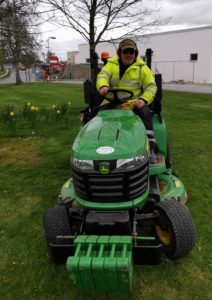 Donal, who lives in his native Tramore with wife Maire, clearly draws enormous satisfaction from his work.

Donal continued: “Shrub maintenance is a constant work in progress here. You’ve some shrubs that are in flower, some are still to come into flower and you have to treat them all accordingly. So I take care of the gardens, the flowers, the shrubs, the roadways and so on. There are 21 internal courtyards within the hospital that I also take care of; there’s two courtyards with grass in them so we have to cut the grass in there. And then you’ve all the trees that need to be watched for broken branches and so on. One of the very first jobs I did here was to brash (prune) all of the trees, to give them an umbrella-type look at the top and have them looking slimmer at the bottom and so on. That means the lawnmowers can get in around them and, of course, if people want to sit out under a tree, then they can. It becomes more decorative. A lot of people visiting the hospital can be, for good and tough reasons, in here for days at a time. I think it’s good to give someone the option of sitting under a tree if they want to. After all, this is a place where you’re naturally more aware of the highs and lows people go through.”

Of course, work moves with the times and when it comes to machinery on site, Donal has gone electric, a move that’s been embraced by Ken Power and Terry O’Connell of UHW’s Technical Services Department. This includes the provision of a hand mower for the hospital’s internal grassed areas. “It’s quieter and there are no fumes – a win all round,” said Donal.

“One of the doctors here, Carmel-Anne Daly (a consultant radiologist and gardening enthusiast), had a chat with me here shortly after I was ‘adopted’. She was very worried about the spray in terms of the phosphates and contaminants in them. So I suggested using a battery strimmer and she got the hospital to buy us one. We’re now using 30 per cent less spray here as a result. I listened to Dr Daly, she in turn listened to me and everyone gained. The Hospital Manager, Grace Rothwell, has put her shoulder to the wheel on this side of things too. There’s great respect shown to everyone working here.”

Following in his father Hugh’s footsteps (he too was a gardening contractor) and taking over his business in 1983 at a young age, Donal initially concentrated on landscaping before grass cutting took centre stage. 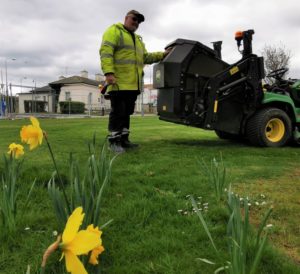 Donal’s burgeoning reputation across Waterford led to his securing the cutting contract for the new Community Care building on the Cork Road before Ardkeen swung into view.

“Anyone that knows my history knows that I know nothing else only plants and trees and shrubs and machinery,” he said.

“Now a lot of people would say I’m after finding a switch to turn myself down a bit but the days here pass like that (clicking his fingers) for me. Lots of people come up to me and say they’d love a job on the grass and sure everyone would love doing it today (Wednesday, April 7) because it’s a nice day. But when it’s lashing down raining and you’ve to take care of a tree that’s after falling and is in the way of an ambulance that’ll be in here in a few minutes’ time and you have to lift it, cut it up and manage it, well that can actually be stressful – but that’s what keeps a smaller belly on me! But there’s great enjoyment in it for me the whole time and that counts for a lot.”