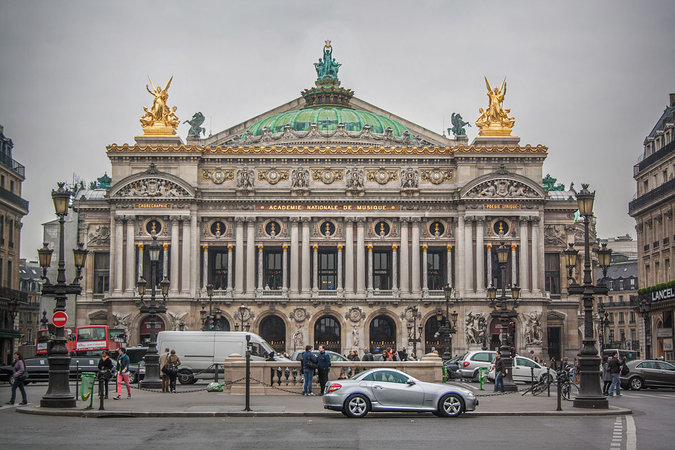 PARIS is just my favourite place. There are so many places to visit and I’ve been there many times thanks to the good fortune of having a sister-in-law Pauline who lived there for many years. Accommodation costs chez Pauline were exceptionally good i.e. nil and the metro was only a snipe’s walk away. Easy access, then, to all the sights and the luxury of there always being a tomorrow when the walking got hard on the legs as anyone who has tried to tour the Louvre (6.5km long by the way!) will tell you.

Quite by accident I happened across a guided tour in English from a superb guide at the famous Opera Garnier where Gaston Leroux fashioned his epic masterpiece ‘The Phantom of the Opera’. The guide fashioned his tour on the parallels between writer Gaston Leroux’s book, architect Charles Garnier’s design, Andrew Lloyd Weber’s opera and the elusive Phantom and his lair.

Gaston Leroux was initially going to be a lawyer but, after squandering his inheritance on gambling, he became a reporter for L’Echo de Paris. At the paper, he reviewed theatre, as well as being a courtroom reporter before he became a writer. Heavily influenced by the macabre of Edgar Allan Poe and the intrigue and scheming in Sir Arthur Conan Doyle, he wrote a detective mystery entitled The Mystery of the Yellow Room in 1907 and, four years later, published his epic ‘Le Fantôme de l’Opéra’.

“Every element of the plot of The Phantom of the Opera finds its origin in the opera house,” the young guide assured us. The setting came from Opera Garnier. Rumours were rife from the time the opera house was finished and Leroux knew them all. Act One of the opera Helle had just finished when a fire in the roof of the opera house melted through a wire holding a counterweight for the chandelier, causing a crash that injured several and killed one. Using this accident paired with rumours of a ghost in that same opera house, Leroux wrote Le Fantôme de l’Opéra and published it in 1910, which was later published in English as The Phantom of the Opera.

The details about the Palais Garnier, and rumours surrounding it, are closely linked in Leroux’s writing and uncannily accurate. The underground caverns and lake exists beneath the opera house and is still used for training firefighters to swim in the dark and is available to the Paris Fire Service in case of a nuclear attack. The infamous chandelier crash and the mysterious apparitions are all rooted in fact. While the mysteries that Leroux uses in his novel about the Phantom remain mysteries, Leroux, nevertheless, declared the rumours to be true, even on his death bed.

The character of the Phantom was also closely related to the actual character of the architect Charles Garnier. Opera Garnier was to be the new cathedral of the bourgeois and was intended to be much more than a theatre in the ordinary sense. For Charles Garnier, an architect of the Ecole des Beaux-Arts, it was a setting for a ritual in which the spectators were also actors who came to be seen rather than to see (the expensive boxes are still the worst view in the theatre!) 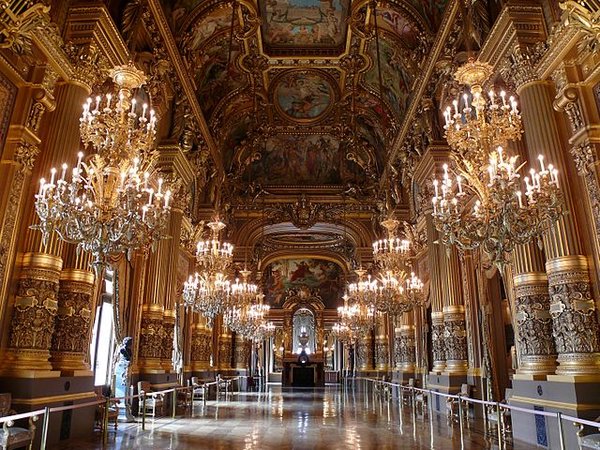 The Grand Foyer of the Paris Opéra Garnier

Construction began in the summer of 1861, although setbacks delayed it for another 14 years. During the first week of excavation, an underground stream was discovered, rendering the ground too unstable for a foundation. It required eight months for the water to be pumped out, though enough was left in the area so that it could become the fifth cellar for operating the hydraulic stage machinery above. However, Garnier’s double-walled and bitumen-sealed cement and concrete foundation proved strong enough to withstand any possible leakages, and construction was able to continue.

Financial over-runs were massive and the final cost came in at three times the original estimate. Garnier’s obsessive behaviour created many enemies. His behaviour mirrored the Phantom’s as he would appear from nowhere and sack artisans on the spot when he was unhappy with their work. He insisted, for example, that the white marble tiles of the Grand Staircase could only come from a specific quarry in Italy. Garnier knew that his Grand Staircase was a theatre-within-a-theatre of its own – a gossipy soap opera for those who came to see and be seen. “The opera is the staircase,” he declared, “the scandalous stairway reveals all — who was together, who was having affairs, who was favoured, who was scorned.” But the costs were enormous and the private entrance of Napoleon III, who commissioned the theatre, was left unfinished.

Garnier’s plan was mocked as “a labyrinth, a turkish bath, and, even a wedding cake. The most famous sculptural group on the facade, ‘The Dance’ by Jean-Baptiste Carpeaux, caused an immediate furore because of its “obscene” nude figures. An anonymous vandal even threw black ink on the sculpture.

Opera Garnier officially opened in 1875. Many of the most prestigious monarchs of Europe attended the opening ceremony, including the President of France’s new Republic, Marshal MacMahon, the Lord Mayor of London, and King Alfonso XII of Spain. Architect Charles Garnier was not invited to the official opening and had to buy his own tickets to the opening.

Nevertheless the applause rang loud and long for architect Charles Garnier, the son of a blacksmith, when he appeared on opening night on his own Grand Staircase at the Opera House that was named after him.

The tour ended in magic with our tiny tour of four standing on the stage of the opera house. I dreamt of all the megastars that had threaded the boards there under Chagall’s magical ceiling: Maria Callas, Luciano Pavarotti, Margot Fontaine, Nureyev and moi!