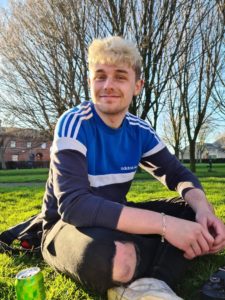 Colm McDonnell from Kilmeaden, who turns 22 tomorrow, is taking on a 70-kilometre walk through Dublin in aid of the Alzheimer’s Society of Ireland.

KILMEADEN’S Colm McDonnell is resting up ahead of a 70-kilometre trek tomorrow which will take in each of Dublin’s 25 postcodes in aid of the Alzheimer Society of Ireland.

Colm, who attended Ballyduff National School and St Declan’s Community College, and is currently studying a Masters in Emerging Media at Dublin City University, told the Waterford News & Star about why he has committed to such a challenge.

“My grandmother Maura Scully, who died in 2014, lived with Alzheimer’s during the last 10 years of his life,” said the Shanbally native, who also turns 22 tomorrow.

“She was diagnosed shortly after her husband, my grandfather Patsy, passed away – and losing him accelerated the affects of the disease on her. But what I didn’t know until very recently is that my mother’s (Anne) mother, my great-grandmother, had Alzheimer’s and then my dad (Shane) told me that his two uncles, my granduncles, are both living with Alzheimer’s, so this is something which is quite prevalent within my own family. And once I shared a video online about my reasons for doing this fundraising walk, between 10 and 15 of the 50-plus who initially shared it, had some form of personal experience with the disease, which was mind-blowing to me.”

According to the Alzhiemer Society of Ireland, Alzheimer’s is the most common and well-known cause of Dementia and is thought to cause over half of all cases. There are currently over 64,000 people living with Dementia in Ireland, with that number expected to double by 2045.

Recalling his grandmother, Colm said: “Every time we visited her (just outside Newcastle West in County Limerick) when I was a young child, she always made a lovely loaf of brown bread which I always enjoyed helping her with. Sadly, the memory of how to make it was something that Alzheimer’s took. I was eight or nine when my grandfather passed away; she was diagnosed before he died so we knew she had it. One of the best ways of coping with Alzheimer’s is to stay in a routine; once your mind is used to a certain order, then it’s better prepared for battling the disease’s symptoms. But once my grandfather died, that sense of order was blown out of the water for Nana, unfortunately and Alzheimer’s took her memory very, very quickly after that.” 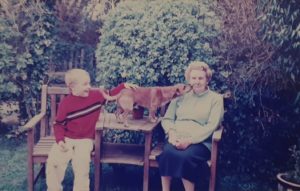 A young Colm pictured with his Grandmother Maura Scully (Ballinakill, Newcastle West, County Limerick), who lived with Alzheimer’s during the final 10 years of her life.

A mother of 12, 11 of whom are still living, Maura’s children operated a rota for as long as they could when it came to keeping her in her County Limerick home before she eventually had to be taken into full-time care. Throughout the more difficult times of her illness, the Alzheimer Society of Ireland provided “an incredible level of support” for Maura and her family. “When we needed it most, they were there for us so tomorrow’s walk is my way of saying thank you. The work they do is incredible both in terms of the support they provide and when it comes to the awareness of the disease which they do so much to highlight nationally. As a family, we can never thank them enough. We still keep involved as a family when it comes to their annual tea afternoons (the next such event being Thursday, May 6) but I also wanted to combine my new love of walking along with my desire to promote this wonderful charity.”

With that in mind, Colm (who worked in The Book Centre for four years) is set to hit the road along with his housemate Mark, at 6am tomorrow on his ‘Walk For Maura’, taking in all of the capital’s postcodes, passing by Dalymount Park, the Jameson Distillery, the Guinness Storehouse, Marlay Park and RTE to name but a few of the capital’s landmarks.

“I reckon 70 kilometres in one day is probably my physical limit,” said Colm, who is thrilled to have raised almost €1000 already “thanks to the wonderful generosity of my friends and family. I’ll be in bed good and early tonight, I’ve a good pair of running shoes picked out and I have to say I’m really looking forward to it. It’ll certainly be a different type of birthday!”

Colm’s donation link is www.idonate.ie/awalkformaura (a page which will be open until May 22) while further information on Alzheimer’s is available via www.alzheimer.ie