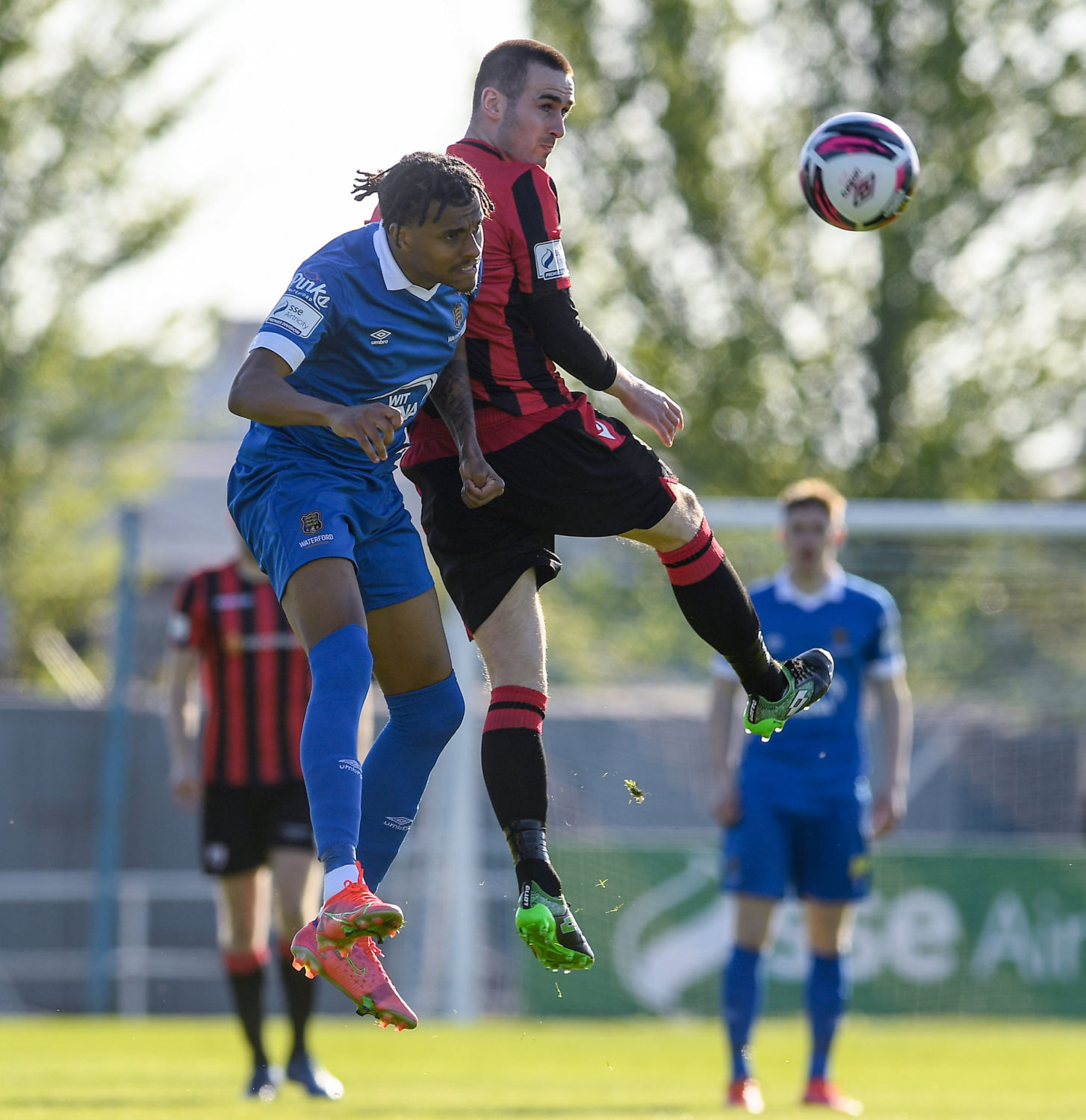 James Mascoll of Waterford FC in action against Shane Elworthy of Longford Town during their SSE Airtricity League Premier Division match between Waterford and Longford Town at the RSC this evening.

The Waterford FC players answered the rallying call to end a dramatic week on and off the field with a hard earned 1-0 win over Longford Town in their SSE Airtricity Premier Division meeting at a sun drenched RSC this evening as the Blues claimed their first home win of the season.

With a couple of days of uncertainty surrounding management duo Kevin Sheedy and Mike Newell, the players stood up to the plate to put Thursday’s dramatics behind them to scrap a win with only ten men after the dismissal of Kyle Ferguson just past the hour mark.

While there was no place once again in the Waterford squad for exiled goalkeeper Brian Murphy for the third game running, it was Prince Mutswunguma that proved to be the match winning hero with a ninth minute goal.

The attacker took advantage of a mistake in the Longford defence when central defender Joe Gorman played the ball straight into the path of striker Mutswunguma, who held his nerve to fire left-footed past the advancing Michael Kelly.

After Blues keeper Paul Martin, who survived a late fitness test to start the game, made a fine stop to deny Rob Manley on 16 minutes after he got on the end of a long Karl Chambers pass, it was Aaron O’Driscoll’s close-range header that should have brought his side level, but his 28th minute header was deflected wide.

Aaron Bolger had a half chance for the visitors on 42 minutes before Mutswunguma should have doubled the lead in the final minute of the half when a great move involving Darragh Power and John Martin saw the match winner steer a left-footed shot inches wide of Kelly’s left-hand post.

The major talking point of the game came shortly past the hour mark when Blues defender Kyle Ferguson was judged to have elbowed Callum Thompson in the eyes of referee Neil Doyle, who was quick to issue a straight red card, with Joe Gorman’s header from the resulting free-kick ruled out for offside.

Longford piled on the pressure in the hope of snatching a point with Sam Verdon having a shot cleared off the line by Cameron Evans before Katlego Mashigo nearly grabbed a bizarre second goal for the Blues late on with a clearance hitting off that nearly rebound back over Michael Kelly.