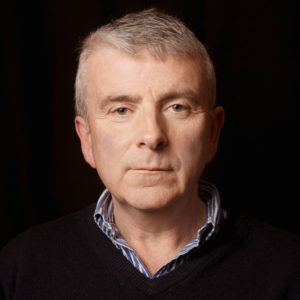 TO be a playwright, you need to be an optimist at the best of times, according to Jim Nolan. Working in the performance arts industry during a pandemic makes that challenge greater, but the Waterford playwright and theatre director has kept busy working on a new play, and looking forward to future directing projects, in whatever format they may go ahead.

Born in Waterford, Jim Nolan has been working as a playwright and theatre director since the early 80s. Nolan co-founded the Red Kettle Theatre Company and formerly served as its Artistic Director before going freelance in 1999. His most recent play, The Red Iron, sold out every seat of a two-week run.

Throughout the pandemic, Nolan has been working from his home in Kilmacthomas to write a new play, a process which usually takes him approximately a full year. “I’ve been able to continue working throughout Covid-19, though it’s just a matter of good fortune that I had a new play I wanted to write,” Nolan told the Waterford News and Star.

“The whole cycle of a new play takes me approximately a year. The nature of writing is a solitary pursuit so in that sense, the pandemic hasn’t changed the work, but normally within that time, I’d be in and out of rehearsal rooms in Waterford and around the country,” he said.

The mixture of writing and directing is “an ideal balance” but of course, that balance has been interrupted by the numerous lockdowns Ireland has faced over the past year.

“In terms of financial loss, it isn’t huge and it’s bearable, but it is one of the casualties,” Nolan explained, adding that he has been “lucky” in that his last play was able to go ahead in 2019.

“Had that been due to open four or five months later, I’d have been in a lot of trouble. We’re lucky we got in just before the collapse,” he said.

Most of Nolan’s playwriting process is preparatory, involving eight or nine months of research, followed by “the shortest part” – the writing.

“I’m in the middle of that, so at least I have something to do every day but I do miss the rehearsal rooms,” he said.

Nolan was clear that his are “small losses” compared to the lives lost in Ireland and overseas. His neighbour is an ambulance driver, and their conversations about the situation at University Hospital Waterford have put things in perspective for him.

“Speaking to someone who’s actually on the frontline shows me how fortunate I am, so I’m getting on with it,” he said.

His next play is set in Waterford, in the back garden of a house on midsummer’s day in 2020 – though the focus of the plot is far from being about the pandemic. “You’d want to be mad to want to see a play about Covid – but it is set during that time, so the pandemic is a backdrop to the piece,” he told the News and Star.

Nolan couldn’t reveal much more about the plot while the play is still in development, but it is due to go into production in autumn 2022.

Before then, Nolan is hopeful that a production of Romeo and Juliet with Waterford Youth Arts will go ahead in the summer, with him as director.

“We’re confident it will be on, but whether it’ll be indoors or outdoors is kind of in suspension. We hope for the best,” he said.

The plans for Romeo and Juliet will include a provision to film and stream it if necessary, something Nolan describes as “a way to get by” given the nature of theatre is interaction between a live audience and live actors on stage.

There is clearly value in the practice, though, as Nolan’s play The Red Iron played to approximately 3,000 people in its sold out run at Garter Lane, but broadcast to over 12,000 people in just one stream when the theatre showed it online during the pandemic.

“You just need to be an optimist. I’m sitting here this afternoon working at a computer to produce typescript, but typescript is nothing until a lot of others get involved and until ultimately an audience gets involved. You need to believe your work will eventually reach a stage and an audience, and the challenge to do that is now greater,” he said.

“But the performing arts industry will come back. It’s a small loss compared to everything else that’s been happening here in Ireland and overseas.”