The late Father Robert Arthure lived out his “satisfying vocation” 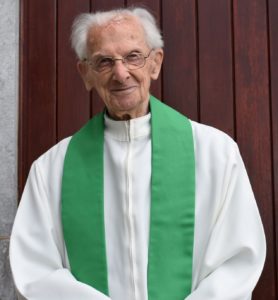 Fr Robert ‘Bob’ Arthure, ordained in 1951, who died yesterday in the Padre Pio Rest Home in Cappoquin. He was in his 96th year.

THE death of Father Robert (Bob) Arthure yesterday (Tuesday, April 27) brought to an end one of the most enduring ministries in the Diocese of Waterford and Lismore. He was in his 96th year.

In September 1943, Fr Bob left his Lismore home to enter Saint John’s College in Waterford, at a time when there were 100 fellow seminarians based in the city.

When asked last year where his vocation had come from, Fr Arthure described his path towards the faith as “a gradual thing”. He stated: “In school (Lismore CBS) priests, particularly missionaries, used to come and speak to us and encourage us to consider joining their Order, but that didn’t interest me. I also had an uncle, my mother’s brother, who was a priest in England. But I was more influenced by the lives and example of priests that I saw working in our own parish. My desire to be a priest evolved gradually – I think my mother was aware of it before I was. But by the time I finished secondary school, it was what I wanted – although I knew very little about what being a priest actually meant!”

Transferring to St Patrick’s College in Maynooth a year into his training, Fr Bob loved his time there. “The fellowship and support of the other students was particularly important,” he said. “When I moved from Junior House to Senior House at the end of second year, I determined to get to know every one of the four hundred students personally – and I succeeded!”

In June 1951, Fr Bob was among a group of 60 men ordained by the Archbishop of Dublin, John Charles McQuaid, among them a future Cardinal in Desmond Connell and Eamon Casey, “later the focus of much public attention” to quote Fr Arthure.

Having volunteered to serve in Nigeria, Fr Arthur was instead assigned by Daniel Cohalan, the then Bishop of Waterford and Lismore, to South Shields in County Durham in the English North East.

“It was a working-class area, fairly tough, terribly cold when the north-east wind bore down into the Tyne estuary – and I had only a bicycle for getting around! But the people were warm-hearted and welcoming. The parish priest was very kind and gave me a lot of guidance. In particular I learned the value of parish visitation. I tried to visit every single house in the section of the parish assigned to me, and all but one door was opened to me.” 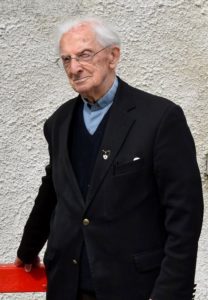 By 1955, Fr Bob was on his way back to his native diocese and would go on to serve across 10 parishes in the diocese, his time in Portlaw/Ballyduff coinciding with this reporter’s years as an altar server.

Casting my mind back over 30 years, I recall Fr Arthure as a quiet, dignified man who did his best to put new servers such as myself as their ease in the minutes before we read the prayer in the Sacristy and took to the altar. He didn’t waste his words and always cut a very contented figure, immersed in his ministry and devoted to his parish and wider community. In the winter of his life, Fr Bob served as Assistant Priest in the parish of St Mary’s Parish in Cappoquin, cocooning in St Mary’s Abbey in Glencairn last year prior to entering into the care of the staff at Padre Pio Rest Home, Cappoquin. During the pandemic, Fr Bob’s musings, shared online and read widely, offered great solace to fellow parishioners and cocooners alike.

He maintained an active social media presence via a Facebook page all the way up to and including the Easter celebrations, even in the wake of a recent “surgical intervention” as he put it.

On February 6, he eloquently posted about those who find themselves alone or isolated. “In the present social regime that the lockdown imposes, there must be many people who are in solitude. Some few people may like it, but that does not mean that it is emotionally healthy for them.”

He added: “Therefore I respectfully suggest that we need to keep in touch, in whatever way possible, with neighbours or relatives who may be on their own, and for whom the sound of a human voice or of a knock on the door could be a reminder that there is somebody who cares about them. We need to watch out for the lonely individual.”

When asked about the core function of a priest in any parish, Fr Bob replied: “People. The priest is there to serve the people, to be with them in their joys and sorrows, to be an instrument of the love and mercy of God to them, to celebrate the sacraments with them, to pray for them. Wherever I was, I tried to connect with people individually. I would learn – usually through talking to others – who in the parish was sick, in trouble of one kind or another, or in need of a chat, and then call on that person and try to help. In a rural parish this might be someone living at the end of a boreen off a side road off another side road, but I went there gladly if there was a need…

“But whatever the structures are, the core of the diocesan priesthood will always be care for people in their daily lives, helping them to experience the mercy and goodness of God. If a young man feels that might be his vocation, let him not be afraid to explore it. It’s an exciting life, full of variety; and I thank God that he called me to this satisfying vocation.”

Fr Robert Arthure, son of the late Ben and Maura Arthure and brother of the late Jack, David, Bill and Oona, is survived by his nieces Audrey, Hilary and Susan, nephews Kevin and Paul, grand-nephews and grand-nieces, Ciarán, Finola, Diarmuid, Darragh, Brendan, Rachel and Jack, Bishop Alphonsus Cullinan, his fellow priests, parishioners, relatives and a large circle of friends.

Fr Arthure’s Requiem Mass will take place on Friday morning in St Mary’s Church, Cappoquin at 11am and will be streamed via www.aidanwalshandsons.ie/live-stream. May he Rest In Peace.