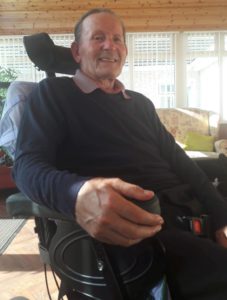 Kenny Bowers (July 6, 1939 to April 15, 2021), who was born on the Cork Road and raised in Portlaw, where he happily worked and lived with his wife Kathleen.

KENNETH ‘Kenny’ Bowers of 351, Queen Street, Portlaw, who died on April 15, has been described by his family as ‘the most gentle, kind and loving soul you could ever meet’.

Born on the Cork Road in Waterford on July 6, 1939, Kenny was the son of Thomas Mansel Eaton Bowers (Fiddown, County Kilkenny) and Winifred Floyd (Toronto, Canada), who met while Thomas was on a business trip to Canada.

As a boy, Kenny attended the Church of Ireland school on the corner of Brown Street before progressing to the Technical School where he was taught by Jim Timmins, a great neighbour and outstanding teacher who commanded the respect of a generation of local youngsters.

A lifelong lover of nature, Kenny loved swimming in the Salmon Leap in nearby Curraghmore and revelled in the summer sunshine.

A keen sportsman, Kenny was an outstanding soccer player, proudly togging out in the colours of Portlaw United AFC for many years, during which time he picked up several honours. He regularly cycled to Kilcohan Park to watch Waterford FC and also revelled in the successes of Waterford’s hurlers down through the years.

Kenny married Kathleen Power (well-known and respected for her many subsequent years of service at Portlaw Post Office) in 1964 and they spent 56 years of married life at 351, Queen Street, where they raised their children, Karen and Kenny.

Following school, Kenny worked in Portlaw’s tannery, enjoying two stints down the Factory Road either side of a spell working in Bristol, where his sisters then lived.

Following the tannery’s closure in 1985, Kenny went on to work as a gardener at Mount Congreve Estate and over the decades, his Queen Street garden was one of the most resplendent in Portlaw.

“Kenny Bowers was the kindest soul you could ever meet,” his granddaughter Leah said at the Funeral Service held at Portlaw’s Holy Trinity Church of Ireland on Saturday, April 17. “We were absolutely blessed to be able to call him Grandad. He always made sure to tell us how much he loved us.”

Leah stated: “My earliest memories with him are of walking together in Woodlock, Curraghmore and one of his favourite places, the Salmon Leap. Grandad made up a game for us to play on the ‘first bridge’ in Curraghmore where we would have to find the best leaf to throw into the river and then see which one would be fastest and win the ‘race’. We also loved going for picnics under the big tree (a 180-feet tall Sitka Spruce in Curraghmore). We’d eat all our food and then go straight back home…

“Grandad loved music. There wasn’t a day that went by where he wouldn’t be singing or dancing. Every Monday night, he came to our house; we played Elvis tracks over and over and Grandad always danced and sang the night away. I have so many more memories of the wonderful times we shared together and I will treasure each and every one of them. He looked forward to each and every summer and was the first to have the shorts on when the sun came out. Both Nan and Grandad came with us on plenty of holidays and he adored swimming in the pool and laying out in the sun. He just loved the sunshine.”

For a local such as myself, Kenny was one of many friendly faces we were used to seeing in their respective front gardens, like Francie and Joan Walsh down the street from him or John and Patricia O’Shea on the Carrick Road. Kind, reliable features of our townscape.

As Maria Lalor put it when offering her condolences: “I have very fond memories of the gentle and caring Kenny, smiling and always a kind word for everyone.” What a fitting epitaph to a life well and truly lived by a devoted husband, father and grandfather.

Following the service, at which Elaine Ryan was the soloist, interral took place at St Patrick’s Cemetery in Portlaw, with members of the Mount Sion Choir singing at the graveside.

Said Leah: “Grandad was never without a smile, even up to his final days. He was so laid back and always looked for the best in everything. He was an absolutely beautiful, gentle soul and I will always aspire to be like him throughout the course of my life. He is my hero.”

May he Rest In Peace.