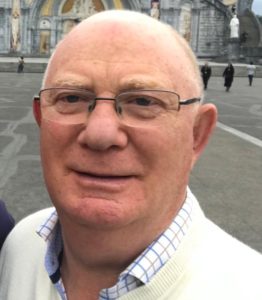 The late Charlie Lapthorne, who died on Monday, April 19, was universally admired across the city he gave so much to.

CHARLIE LAPTHORNE, who died on Monday, April 19, was a man who, throughout his life, recognised the significance of kindness, the primacy of team work and the privilege of giving.

Those great qualities of Charlie’s (better known as ‘Cha’ to his family) were justly recalled at his Requiem Mass at St Mary’s Church in Ballygunner on Wednesday, April 21 by celebrant, Father Liam Power PP.

Charlie, of Viewmount Park and formerly of Cross Douglas Road in his native Cork, lived a life that was “full of passion, belonging and an urgency for new possibilities,” said Fr Power.

While much of what there is to say about Charlie was never sought by the man himself, Fr Power said he felt compelled to commend and “stand in awe” of Charlie’s many achievements.

In the 1970s, Charlie, along with Tom Coppinger and Willie Jackman, founded the Ballygunner Scout Group, “nourishing it” during those initial 10 years as it sought to boost membership.

Charlie was “the treasurer and motivator” of the local Scout movement, with the Scout Hall, just down the hill from St Mary’s Church, a proud legacy to all the hard yards extolled by Charlie, Tom and Willie.

Charlie, a respected practitioner in the insurance industry, was as synonymous with the Lions Club in Waterford as he was with both the Scouts and Ballygunner GAA Club, with Fr Power describing his commitment to the Lions Club as “legendary”.

Be it the Christmas Hamper Appeal, including the much-loved annual concert in the Cathedral, “he helped to raise, probably, hundreds of thousands of Euro over the years because he had that unique and charismatic personality. He was able to approach businesses and organisations and people would recognise Charlie and they’d donate without question because of the personality, the humour, the warmth… and his generosity of spirit, compassion and thoughtfulness for his fellow man.”

Fiona, Charlie’s eldest child, while acknowledging that her father didn’t wish to be eulogised, said her family wanted to thank all who had offered their support and kind words.

“Please know that the kindness shown to Cha, as we always called him, and to us as a family has been hugely appreciated and it will continue to help Mam and the rest of us in the days and weeks ahead. The level of respect and affection that has been shown towards Cha has been amazing. It seems that we are all agreed that Cha was indeed a true and utter gentleman.”

Acknowledging Charlie’s enormous contribution to the development and success of Ballygunner GAA Club, serving as its treasurer for over 15 years, Fr Power said the respect Charlie commanded from fellow club delegates and County Board officers ran deep.

In addition to all of this, Charlie also raised funds for the ‘Fight For Sight’ charity and served as treasurer of the Waterford Lourdes Pilgrimage Committee and as a Brancardier (a non-medical helper) during the pilgrimage itself. While in Lourdes, Charlie regularly volunteered for night duty in the hospital where the sick pilgrims resided, said Fr Power.

Charlie was also a Eucharistic Minister and a Minister of the Word in St Joseph, St Benildus and St Mary’s Parish, “a powerful example of what really living out Eucharistic faith actually means in practice”.

A common thread featured throughout the many online condolences offered to the Lapthorne family: of how decent a man Charlie was, of how kind Charlie was when it came to both his time and words and what a thorough gentleman he was.

Wrote Gerry and Eileen Cullinan: “Charlie was a true friend, very generous in every way, one of nature’s gentlemen. Charlie had a lovely sense of humour, always had a smile for everyone and a people’s person who lit up the lives of many.”

Charlie Lapthorne’s Requiem Mass concluded to the strains of ‘The Banks Of My Own Lovely Lee’. There can be no doubt that Charlie sported and played in both the county of his birth and the city which became his happy home and to which he made such a wonderful and long-lasting contribution.

Saluting her Dad, Fiona said: “Thank you for being a devoted husband and father who gave us great times which we will always remember and for instilling the values which we continue to try to uphold and pass on to our wonderful darlings. If the measure of a man was calculated not by the station in life to which he rises but in how he treats others, then today, we are truly saying farewell to a colossus of a man. ‘Ta da’, Cha. Go raibh míle, míle maith agat. You are a legend.” May the sod of the Déise lie softly upon him. Rest In Peace, Charlie.