Over 60 fire service call-outs in March 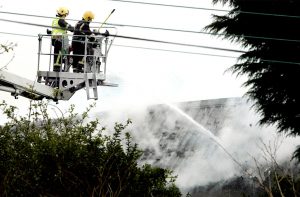 WATERFORD’S 10 fire stations responded to a combined total of 64 fire call-outs during the month of March, according to the City & County Council’s March Management Report.

The majority of the call-outs were in the Metropolitan District, totalling 43, with 18 recorded in the Dungarvan/Lismore District with the Comeragh Area accounting for the remaining three. From this 64, 10 were deemed false alarms (of good intent) with nine of these sourced to the Metropolitan District. Between January and the end of March, the city and county fire services had responded to a total of 145 call-outs; the total tally for 2020 coming to 707.

Meanwhile, during March, Waterford’s Civil Defence – aside from Covid-19 response duties – were involved in one additional activity: the search for a missing person in Athy, County Kildare in which 11 members participated.