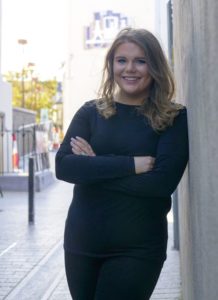 Darajane O’Sullivan used to get a day off school to take in the intricacies of the Budget!

THOSE of us reared within proximity of the Kilkenny border can recall the half day granted from primary school to attend the Iverk Show back when it was held on Thursdays.

Some might even have missed the odd Monday in class due to a big day out following the Déise’s hurlers in Dublin, Cork or Thurles.

But few among us could have missed a few hours of a certain school week for the reason Darajane O’Sullivan cited when shooting the ‘WellSaid’ breeze with me recently.

“I used to get the day off when the Budget was on,” she declared, much to this interviewer’s belly-laughing amusement.

“And the (Mercy) teachers all knew after Third Year. I’d go in for the nine o’clock class and I’d have a note with me, explaining that ‘Dara is going home to watch the Budget’. So then I’d go home, sit and watch it all. Then the next day, I’d have to give a report to my business class about it and that became my thing. I had a few Lents where my friends made me give up talking about politics – and they were 40 long days and nights for me! And as I got older, it’s fair to say that my opinions refined and I got a better grasp of when to talk – and, just as importantly, when not to talk – about politics. I was always interested in the bigger things like the Budget and so on. That’s just part of who I am; we all have our own quirks!”

Daughter of Mags O’Sullivan and TV Honan, Darajane spoke with great affection for her grandparents, adding: “When I was growing up, they were the be-all and end-all. I’d do what I was told by my mother but I would do anything for my grandparents.”

She continued: “It was lovely being so close to everyone. I was reared in Green Street just off Ballybricken and Nanny and Grandad (O’Sullivan) were in Mount Sion Avenue so they were basically next door to us. And still having Tras (Honan, who turned 91 in January) is wonderful; she has had such a massive impact on my life.”

Darajane added: “Grandparents, in so many ways, make you who you are. Generally, you’re lucky enough to have your parents for a long time but by virtue of when you’re born, most of us tend to have our grandparents for less time. And I can’t imagine what life would have been like if I hadn’t had mine growing up and living so close to me.”

A social media manager, an event consultant and public relations professional, Darajane has busied herself across a range of fields through her work with Spraoi and EveryEvent, in addition to a 17-month stint as Ógra Fianna Fáil’s Press Officer.

Following her Leaving Certificate in 2016, Darajane took a gap year, during which she worked with Spraoi, before arriving at UCC to study English and Politics.

Despite returning to Cork for her second year, “something didn’t feel right” so Darajane left and returned to Waterford – incidentally she’s hoping to secure a Media Degree via the University of Sunderland over the next 10 months.

In 2018, she began working with EveryEvent, which led to social media and event work with the Harvest Festival, Winterval and St Patrick’s Day, all of which she developed a real grá for.

Politics is another passion of Darajane’s but it was only when she was in Fourth Class that she became aware of her grandmother Tras’s political legacy as the first woman to chair Seanad Éireann.

Citing her mother’s social and political awareness throughout her childhood, along with the influence of her Nanny Mary, that Darajane became actively involved in politics felt somewhat inevitable.

“It’s come a long way from getting the day off school alright! Now my mother’s parents were Fine Gael supporters and Tras is from the Fianna Fáil tradition so where I hung my hat wasn’t locked in until Tras asked me to attend a 1916 commemorative dinner dance on her behalf, which was hosted by Fianna Fáil. Not too long after that, an application form was put in front of me. And the rest is history.” 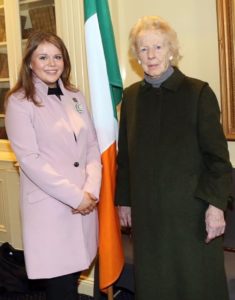 Darajane pictured with her grandmother Tras Honan (91), the first woman elected as Seanad Cathaoirleach, a position she twice held between 1977 and 1992.

Having actively canvassed for Fianna Fáil in Waterford, including Eddie Mulligan’s general election campaign, talk of Darajane putting her own name on a local election ballot paper was widely discussed two years ago. But it appears clear that she’s happier to engage herself in a candidate’s campaign rather than directly feature on the ticket.

“It’s a phase you probably have to go through: the ‘will I or won’t I’ of it when it comes to standing. But you have to be so sure of yourself if you put yourself forward as a candidate and it’s a big commitment to make when you’re 19 or 20 years of age. But ultimately, I chose to sit in the back politically, so to speak, and I feel I made the right decision for me, to be a campaigner rather than a candidate. That has given me the adrenaline rush without putting myself directly out there.”

A decade from now, where does Darajane see herself? “I just want to be happy. It’d be great to be settled and have the house and so on but being happy really is the most important thing for me. Having not had a day off for 18 months before Covid – I was really running on a hamster wheel throughout that period – I’ve had time to think about what I’ve been doing and what parts of my job were making me happy and what parts weren’t. But for now, completing the degree and then coming back and getting a business started is what’s going to occupy my time, and I’m very excited about what lies right in front of me.”