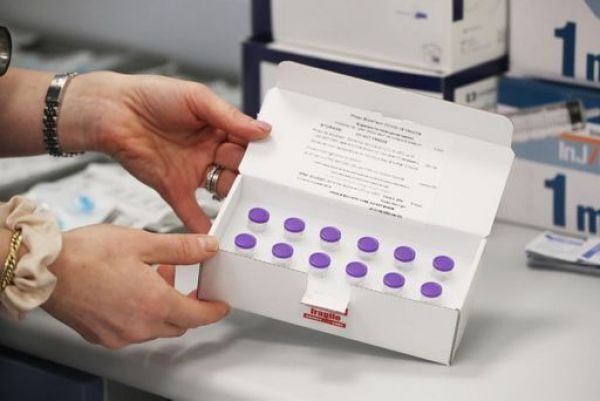 Ireland will receive at least 4.8 million vaccines each year in 2022 and 2023 under a deal struck between Pfizer and the EU.

As the Irish Examiner reports, Health Minister Stephen Donnelly has received Cabinet approval to enter a €191m deal which would ensure the country has supplies of Covid vaccines in the coming years.

It is also now likely that the vaccination programme will be extended to people under the age of 16, ministers were told.

Mr Donnelly has also received updated advice from the HSE on the vaccine rollout which will see vaccinations continue to be carried out on the basis of age.

The latest figures given to Cabinet today reveal that one in four people in the 60 to 69 age group have not yet registered through the online portal for a vaccine.

A Government spokesperson said more than 311,000 people (74 per cent) in this age group have registered and the portal remains open for people who have not signed up.

However, he said as the vaccination programme continues, the numbers of people not registering will be examined.

By May 2, some 31 per cent of the population had been administered with at least one dose and 12 per cent of adults are now fully vaccinated.

The EU Purchase Agreement with BioNTech Pfizer, the contract for which is due to be finalised in the coming days, will secure approximately 4.9m doses in 2022 and the same again in 2023.

This would be enough to fully vaccinate approximately 2.45m people with two doses.

However, the agreement does give the option of securing an additional 9.8m doses over the time period.

“Scientific advice indicates that variants will continue to evolve over the coming months and that vaccine immunity is not indefinite,” a Government spokesperson said.

“Therefore, it is likely that repeated boosters with updated vaccine formulations will be needed for a very high proportion of the population.”

Pfizer/BioNTech are now in the process of updating the formulation and doses secured via the new agreement would be capable of being stored in standard refrigeration.

Almost 30% of those who can receive a vaccine have been given a first dose.

One in nine are now fully vaccinated. pic.twitter.com/YN8G8RAWBF