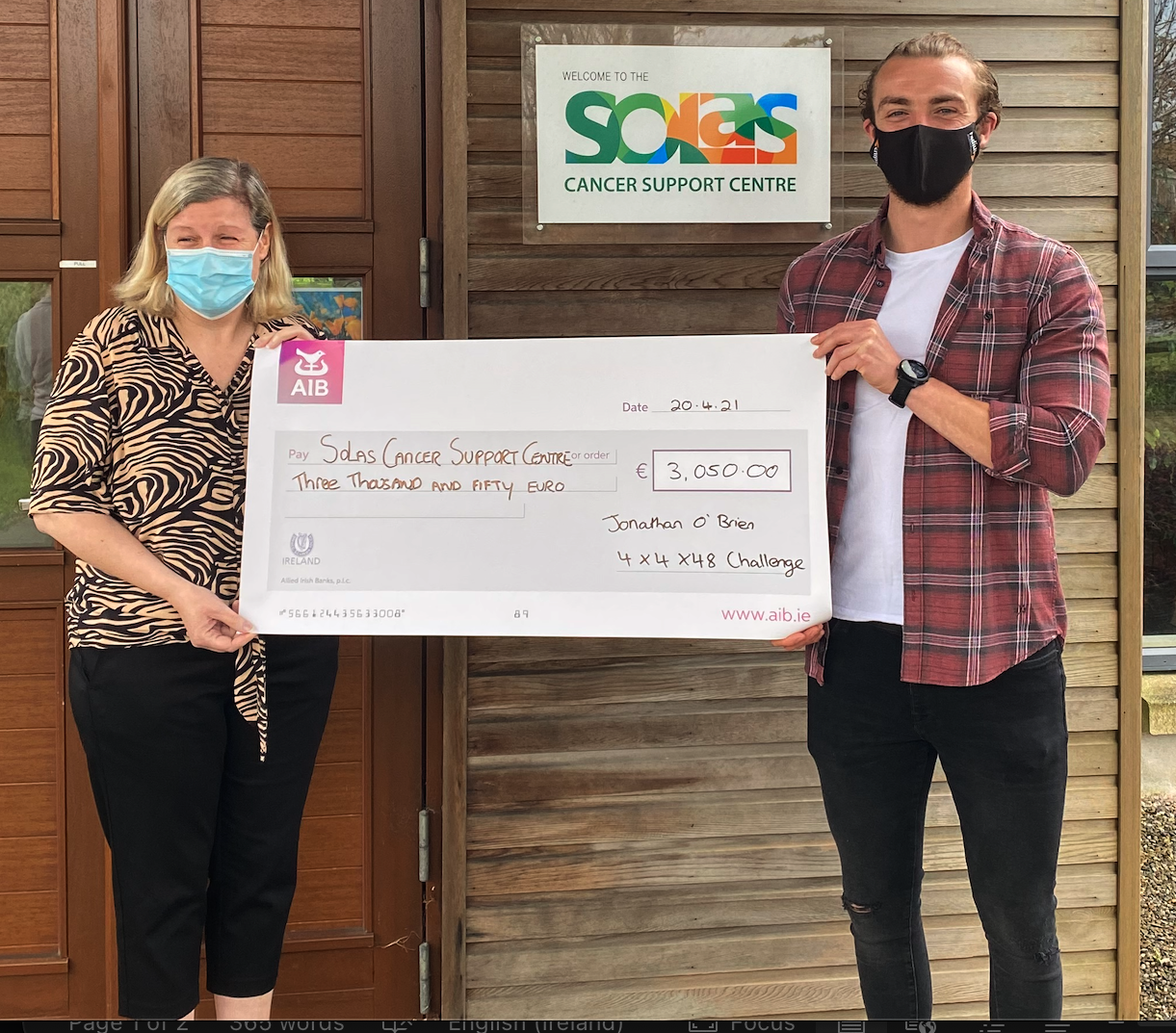 Jonathan O’Brien is pictured presenting a cheque for €3,050 to Tracey McDaid of the Solas Centre.

A challenge that took a hell of a lot of mental and physical endurance from Jonathan O’Brien recently has raised a whopping €3,050 for the Solas Centre with the proceeds of the 4x4x48 event presented to the organisation in the past week.

After deciding that he wanted to challenge himself in ways that “I would have never imagined,” O’Brien ran four miles every four hours over a 48 hour period, which the help of family and friends in what was a “crazy” idea.

After suffering the loss of his aunt to cancer back in 2019, and after his own father Decky battled the illness, Jonathan decided to raise vital funds for the centre as a “thank you” gesture for their help and support that they gave to his family during that time.

Speaking to the Waterford News & Star, Jonathan said, “Words fail me really to describe the feeling of raising that amount of money for the Solas Cancer Support Centre, and I’m grateful to all those who supported me in raising €3,050 for them.

“The challenge itself was a mental one in every sense, but I think that it proved to me that anything is possible in this life when you have the right people there to support you along the way. I had that support from my parents Alice and Decky, brother Dylan, my grandparents, extended family and friends.”

“I was overwhelmed really with the amount of people that came out to support me over the 48 hours and these people really kept me going. There was people doing the challenge with me all the way to the end, and I just can’t thank these people enough.

“The supportive messages that I received during the course of the challenge kept me going. To run four miles every four hours over 48 hours was mental. It tested me mentally and physically, but it meant so much to me and my family.

“The Solas Centre has been a great asset to the South East as so many families have gone through incredible hardship, some even experiencing loss at the hands of cancer. Personally, my own father suffered from prostate cancer and we found the Solas Centre to be a great outlet for him and my family.

“They provide support for close family members who may suffer mental health issues as a result. Fortunately, my father got through everything and recovered following his treatments. At the same time, my family suffered the loss of my aunt to cancer in recent years.

“The Solas Centre was there and supported my cousins, my grandparents, my mother and her siblings, and they helped them to come to terms with the passing of my aunt. I’ll be forever grateful to all those who supported me and made the unselfish donations.”