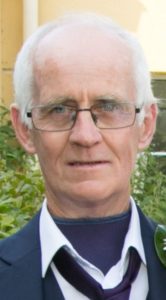 John Harney of Annestown, who died on Saturday, April 24.

JOHN HARNEY of Annestown, who died on Saturday, April 24, was remembered at his Requiem Mass as a quiet, thoughtful man who exemplified a duty of care both at home and in the course of his work.

During his sermon at Fenor’s Church of the Immaculate Conception on Monday, April 26, Fr Jerry Condon PP told all gathered, both inside and outside, that one of the great gifts of Mr Harney’s life was to follow his lambs.

“He followed the lambs at his farm every day and like Jesus, he was called to serve, to serve his lambs so well and he was there for them at all times.”

Praising John’s grandchildren, Fr Condon told them: “Grandad loved you from the tips of his toes to the top of his head and that’s being honest about it. He loved you all as anyone would have noticed when visiting John’s house, to see so many photos in which you were all either walking in front of their Grandad or behind him.”

To John’s wife, Margaret, Fr Condon said: “You have been with John for a great many years. You had great times together like any good couple, sharing the journey of life, having your children and now you have your grandchildren, your relatives, friends and all who are connected with you in any way. I say to them today, treasure the gift of life, treasure the gift of a friend walking in, treasure the moments that you will be able to walk with other people and share great moments in life and to be able to say that John was a real husband, a real father and a real grandfather. He was quiet and easy going and today here in Fenor we are saluting a man who had faith, who in his journey of life met a lot of people, did a lot of work and was the good servant, carrying sheep back home, like his little friends and then brought them back out into the fields when they were ready to roam again.”

In one of many thoughtful condolences offered to the Harney family, Jeff Cheasty wrote: “In my memories of him, I always see him as this wonderful, smiling person who loved his whole family more than anything. He was such a special person, who will be sorely missed by all who knew him.”

In another, Lismore’s Michael Coleman stated: “I’ll always remember how helpful he was to me when I did my placement from Kildalton on the farm 15 years ago.” And another neighbour, saying so much in just a handful of words, posted: “Annestown has lost a pure gentleman.”

But the most thoughtful words of all shared on Monday last were those offered from the graveside by granddaughter Laoibhse, who said: “He wasn’t just an amazing person; he was the best Grandad ever. The memories of him are treasured and there’s no doubt about that.”

Mr Harney, who died peacefully at home surrounded by his family, was predeceased by his parents Richard and Ita and brothers Francis and Joe.

In the sunshine of a bright Monday afternoon, Mr Harney’s remains were laid to rest in Fenor Cemetery, as mourners listened to a recording of ‘Come My Little Son’, sung by the unequalled Luke Kelly. May he Rest In Peace.

Tramore has lost “its ray of sunshine”

Obituary: Martin Breen: the popular Ballytruckle publican who made a positive difference