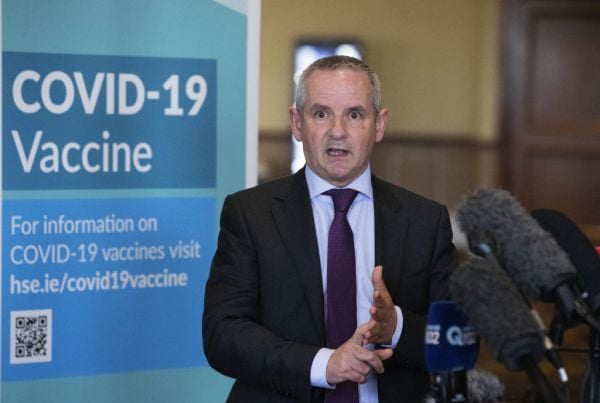 The HSE has asked for “flexibility” to allow the use of the Johnson & Johnson vaccine, also known as the Janssen vaccine, for people aged under 50.

It follows a recommendation from the National Immunisation Advisory Committee (Niac) that the Johnson & Johnson and AstraZeneca jabs not be given to people under 50.

An updated vaccination rollout plan, based on this advice, is expected to be announced by the Government shortly.

In a submission to chief medical officer Dr Tony Holohan on Sunday, the HSE made a series of recommendations for the revised plan, including that the rollout continues based on age, from oldest to youngest.

HSE chief executive Paul Reid said it was his view that the plan was the “most effective” way to ensure the rollout progresses quickly and safely.

Commenting on the recommendations, he said: “Firstly, that it continues to adhere to the Government’s age-based sequencing policy.

“Secondly, that it maximises the pace of the programme and the safe and effective vaccination of the population.

“Thirdly that it maximises the usage of all available vaccines throughout quarter two.”

However, an issue has arisen in relation to the Janssen jab, because the majority of doses are due at the end of June, by which time the majority of people over 50 should have been vaccinated already.

This had led to questions over whether younger people could jump the queue, or if different age cohorts could be vaccinated in parallel with each other.

“We can’t have a scenario where we end up progressing through the ages, where we’re in a much younger age group, and still waiting for deliveries to finalise the over 50s.

“So ultimately, it needs some flexibility to utilise those Janssens beyond the age as currently defined for over 50s.”

He added: “Looking at the volumes as they come and are backended, particularly for the Janssen vaccine, we will need the flexibility to administer below the ages of 50 for some of the Janssen.”

However, Mr Reid said the HSE will not progress with such a move unless it is approved by the Government.

“We will not progress in a manner that is beyond Government policy,” he told an HSE briefing on Thursday.

He added: “The benefits for the plan, from our perspective as it’s submitted, it maximises all available vaccines in quarter two.

“It utilises all those vaccines as we progress through May and June. And certainly it facilitates the utilisation of the community pharmacy sector.

“The recommendation is currently with the Department and the CMO for consideration.”

Mr Reid told the briefing that at no other stage during the pandemic have we been at “such a hopeful point as we are right now”.

The number of people in hospital was down to 131 on Thursday, down 19 per cent on the same day last week.

The number of patients in intensive care units stands at 31, down 20 per cent on the previous week.

He added: “In the last four weeks there have been 212 cases of Covid amongst those aged 75 years and over, compared to 6,793 in the first four weeks of January.”

Last week 201,000 vaccine doses were administered, with the largest single day recorded on Friday, at over 45,000.