Odudu Johnson: The Song of Success 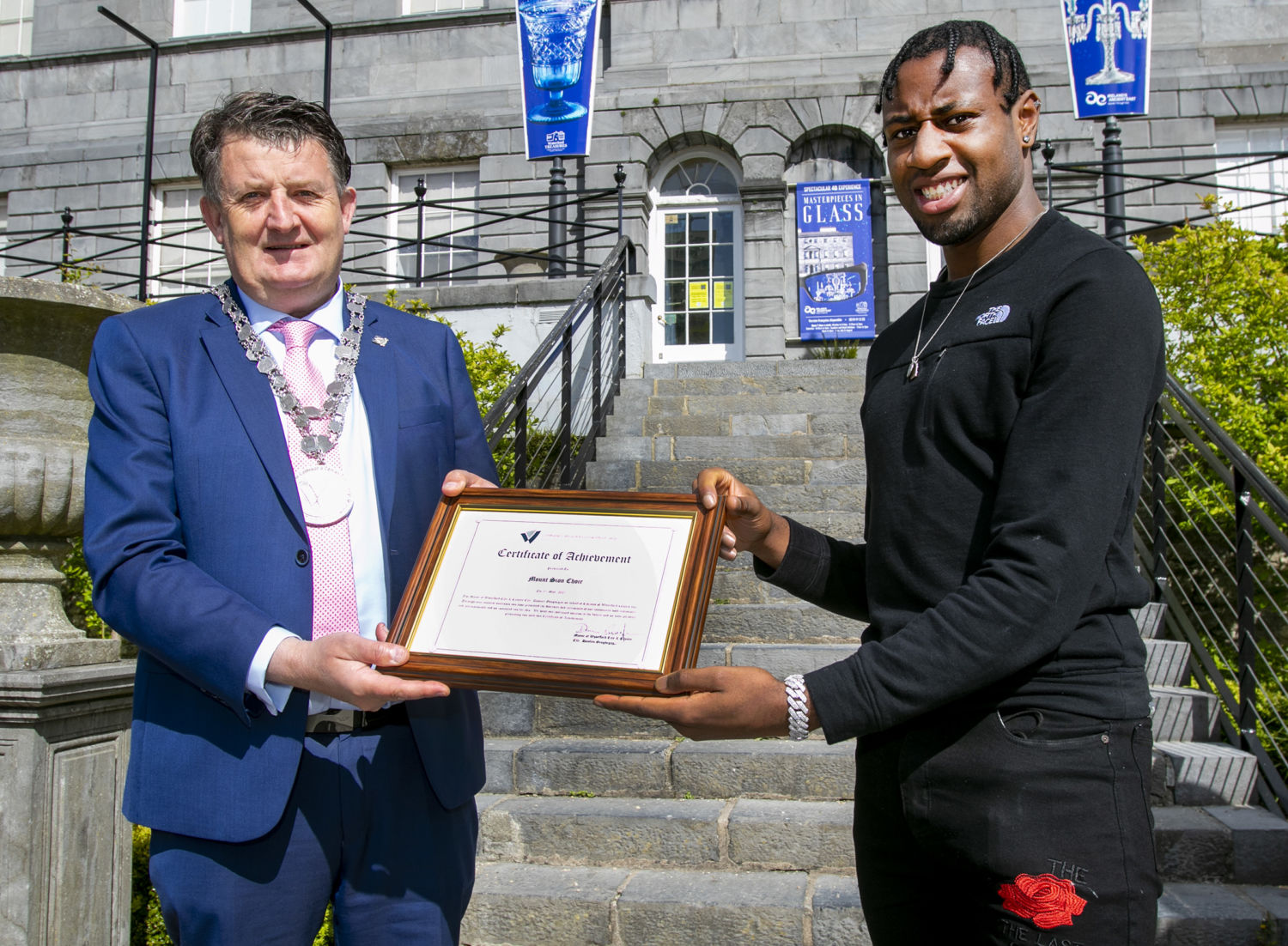 Mayor of Waterford City and County Council Cllr. Damien Geoghegan, presented a Certificates of Achievement to Odudu Johnson (Yung Shakur) on behalf of Mount Sion CBS, Choir, for all their musical successes, having presented the diversity and inclusivity of the community. Photo: Joe Evans

ODUDU Johnson will be known by many as the voice behind the viral hurling hit, Swing, and while he has finished his time in Mount Sion CBS, he remains as the leader of the Mount Sion Choir. The choir gained huge notoriety earlier this year when they released a single with singer, Ronan Keating, and what makes the whole experience even more incredible, is that the choir is taught without scales or any formal teaching.

Odudu Johnson, who has led the choir since 2013, was honoured at a Mayoral reception in Waterford for his achievements yesterday, May 5. His award was representative of the entire choir.

Speaking to this newspaper, Odudu, who is born to Nigerian parents, said, “I am a pure Mount Sion lad. I went to the Mount Sion pre-school, primary school and secondary school.”
From a very early age, Odudu remembers Mr. Fanning emphasising the importance of being part of the hurling community in Mount Sion. As an impressionable student, Odudu vividly remembers being told that hurling is not, and should not be, a white-dominant sport, and everyone was encouraged to try it.

“We looked for lads at the GAA club to come and join the sport. You don’t see black lads playing hurling on TV and we were taught well, why can’t you do that? You’re Irish and it’s an Irish sport and you’re in Ireland,” recalls Odudu.

Looking at students in school now, he notes that you will pass all nationalities on the school corridor, but when he was in first year, that wasn’t the case. Odudu credits Mount Sion as fostering a community where inclusivity was key, and where all barriers to success were removed, including race and background.

“Leaving Mount Sion, you look back with pride as a past pupil, not just because you went there, but because of what the school represents,” said the former student.

Christopher Halligan was someone who Odudu looked up to very much. Being a year ahead of Odudu, he watched as Christopher went into the hall and sang and he remembered thinking how much he wanted to “be like Chris.”

A year later, Odudu started first year and the choir was in its second year, but it was still very much in its infancy, feeling more like a youth group at the time.

“It was a safe place for lads to just come in and sing, and maybe get away from class and chill. The choices in my year were either choir or the library and everybody went to choir. We had to sing a hymn or something and most people couldn’t sing but it was a craic and a bit of a buzz,” he said.
Ms. Kearney heard through the grapevine that Odudu could freestyle rap and so she put him on the spot and a new element was created within the choir. For an event soon after at Sanofi, which was then Genzyme, Odudu was tasked with writing a rap, which incorporated the names of every one of their Directors.

“We had a lot of nationalities within the choir, and then suddenly there is me rapping, and when we travelled to different schools singing, they saw a black kid rapping in a school choir. It felt like we were doing something really different.”

A memorable moment came for Odudu after an event in the Theatre Royal when a small boy ran up to him and said, “I want to be just like you.” He knew at that point that they were making a real difference to people’s perceptions.
The choir continued developing in a natural manner, and skillsets continued to strengthen. Charity events and large events paved the way for an invitation to Prague to the Young Bohemia festival. At the time, they were too nervous as a choir to compete so they took it all in. The following year, the choir returned to compete and won second place from acts across the world.

“We know nothing about scales or music theory and we won second in the world twice. We were inspiring ourselves and others. “

Stating that the most difficult place to perform is in front of your friends, and your peers, Odudu knew that once they had done that, they were a different choir. Their confidence collectively grew and continues to grow, and that first decision to follow in the footsteps of Christopher Halligan has seen Odudu Johnson become a household name across the internet and beyond.