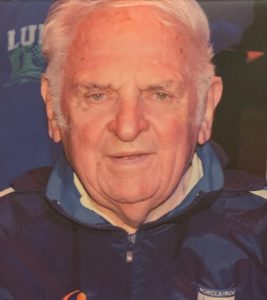 AUSTIN FLYNN was not known for devoting much time to talk of the medals he earned at full-back during Waterford’s most successful inter-county era, his Requiem Mass was told on Thursday last.

In a wonderful eulogy at St Augustine’s Church in Abbeyside, grandson Gus Flynn, who hurls for Ballygunner, said that hurling played second fiddle when it came to his Grandad’s friendships, of which he made so, so many.

“Everywhere we went with Grandad, we were sure to get caught chatting to someone for what seemed to be hours,” he said.

“There was no such thing as a short chat with Austin and he built tremendous networks of friends during his years of hurling, with the Health Board and the guesthouse. So in pursuit of all these All-Ireland and county medals, he picked up some great friends and he would say that they were the real gold he picked up along the way. I know this all sounds lovely, but sometimes I think he might have only been saying it because the lads out in the Brickeys were never winning any medals and he had to make them feel good somehow!”

During his sermon, life-long friend Father Michael Enright, who sat alongside Austin at the 1954 All-Ireland Football Final, described Austin Flynn as “a gentle giant, an Abbeyside man to the core”.

Fr Enright added: “All of the stuff that Austin wrote himself, he was a genius in his own right. I know a lot of it has been kept and will be of value not only to the family but to wider society because there are some great words of wisdom there.”

Gus Flynn later shared one of his Grandad’s musings with the physical congregation and the many watching online. “When things go wrong as they sometimes will, when the road you’re trudging seems all uphill, when the funds are low and the debts are high, and you want to smile but you have to sigh, when care is pressing you down a bit, rest if you must but don’t you quit.”

A generous man who always saw the good in everyone, Austin Flynn once brought a few of his Déise team mates out on his boat, the ‘Village Girl’, which Martin Óg Morrissey recalled to Gus last week.

“Philly Grimes must have been a little bit sceptical about the sturdiness of it because he was asking Grandad if he could swim. Grandad told him he couldn’t. Grimes must have been a little concerned at this stage because he asked Grandad what’d happen if they went down. ‘Well,” said Grandad. ‘I play full-back. I hang onto fellas the whole time; I’d have no problem hanging onto you!’”

There were many fitting tributes offered to Austin and his family over the course of last week, words which will surely provide some solace in the difficult months that lie ahead.

“A true gent,” wrote Kieran and Bernie O’Connor of Abbeyside. “A gentle giant whose company we always enjoyed. A proud Deise and Abbeyside man who did both club and county proud. The Prince of Full Backs and Hero of 59.”

Eddie Keher, the Kilkenny legend who made his senior inter-county debut in the 1959 All-Ireland Final defeat to Waterford, posted: “So sorry to hear of the sad passing of Austin – a pure gentleman on and off the field. It was always a pleasure to meet Austin. He made a huge contribution to Waterford hurling and his Club in particular but also to the hurling community nationally.”

Tipperary great, Michael ‘Babs’ Keating hailed Austin as “one of the great full-backs of his time”, while condolences were also extended by another Premier legend, Borrisoleigh’s Jimmy Finn who at 19, captained Tipp to a third successive MacCarthy Cup in 1951.

With his 1959 team mates Martin Óg Morrissey and Mickey O’Connor among last Thursday’s mourners, his fellow All-Ireland winning team mate Larry Guinan wrote: “Austin was a gentleman and I will miss our chats”.

He is survived by daughters Janice and Anita, son-in-law John Curran, grandchildren Cormac, Cathal, Clara, Gus and Róisín, brother-in-law Tomás Walsh, nephews, nieces and extended family, his carer Danuta and the many friends he made throughout his 88 years.

Said Gus Flynn: “To many, he would have been Waterford’s dependable full-back but to his family and friends he was their Mr Dependable, he was their full-back.” May the sod of the Déise rest easily upon Austin Flynn of Abbeyside and Waterford.