Ireland not being singled out over tax in EU Covid fund, Commissioner says 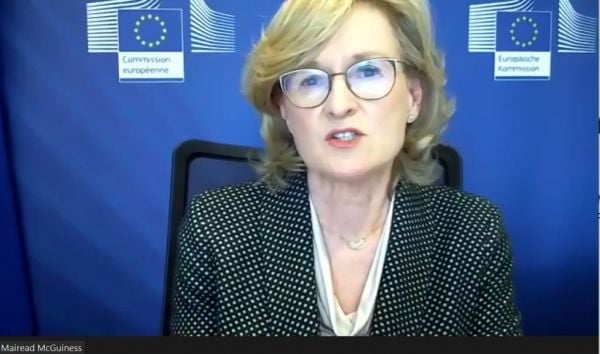 Ireland is not being singled out by the EU attaching conditions to its Covid-19 economic recovery funding, the EU Financial Services Commissioner has said.

Mairead McGuinness said Ireland is not being treated “any differently” to any other member state.

Ireland is due to get hundreds of millions of euro in funding over the next three years as part of the EU’s €700 billion recovery fund, but its contingent on a plan being submitted outlining how it intends to spend that money.

For Ireland that plan must include a widening of its tax base. But the Government has yet to submit a plan.

Ms McGuinness said it is not a race to get plans in, rather it is about EU member states submitting plans that are well-prepared.

“The priority is that the member states not so much a race to get their plan in but come with a prepared plan,” she said.

“When it comes to the particulars around country-specific recommendations I think it’s important to say that Ireland is not singled out.

“Every country is being asked to look at its country-specific recommendations and make progress on some or all of them.

“In Ireland’s case there are four and one of them is related to broadening the tax base.”

Asked whether Ireland is reluctant to submit a plan because it is being forced to widen the tax base, Ms McGuinness said she did not see that being the case because “Ireland is well able to articulate its concerns”.

Today, @EU_Finance Commissioner @McGuinnessEU delivered a wide-ranging address on the future of finance, touching on everything from digitalisation, digital currencies, sustainable financing, and much more.

The EU Commissioner for Financial Services, Financial Stability and Capital Markets Union made the remarks during an online address to the Institute of International and European Affairs (IIEA) to mark Europe Day.

She described the recovery and resilience fund as an “unprecedented measure” and that it “reflects the nature of the Covid crisis and the need for a big European response”.

“I think that when this takes off and I think there will be a sense of a rejuvenation when this money starts flowing,” Ms McGuinness said.

“We want to make sure that it isn’t just about big projects, but also that there are some reforms that are long term and have a lasting impact as well.”

She told the IIEA webinar that “higher capital requirements and more difficulties around repossessions” could be some of the reasons why some banks were pulling out of the Irish banking sector.

Ms McGuinness said Irish banks face higher capital requirements on mortgage loans than banks in most other European countries because of the impact of the financial crisis.

“Another important reason for high capital requirements is that collateral enforcement is more difficult and slower than in other European countries and as a result, Irish banks are holding more capital to issue loans,” she said.

“These may be some of the factors behind the decisions of private banking groups about their operations in Ireland”.

She told the webinar the pandemic had “accelerated structural change” which she believes is unlikely to be reversed.

“I don’t think we’re going to go back the way we were,” she said.

“The full extent of pandemic’s impact will only become fully visible over time,” she added.

Asked about the US decision to support the vaccine patent waiver, Ms McGuinness said Europe is “streets ahead” in doing its part for global distribution of vaccines and that it was “open to listening and engaging” with the US on the IP waiver.

She added that Europe was “to the fore” when it came to the distribution and also the export of vaccines, while other countries were keeping vaccine production to themselves.

“We are exporting 200 million doses to the wider world and we have distributed 200 million vaccines to Europeans, the rollout is forging ahead,” she said.

“Others of course are not exporting and I think it shows the openness of the European Union to the wider global challenge around vaccination.”