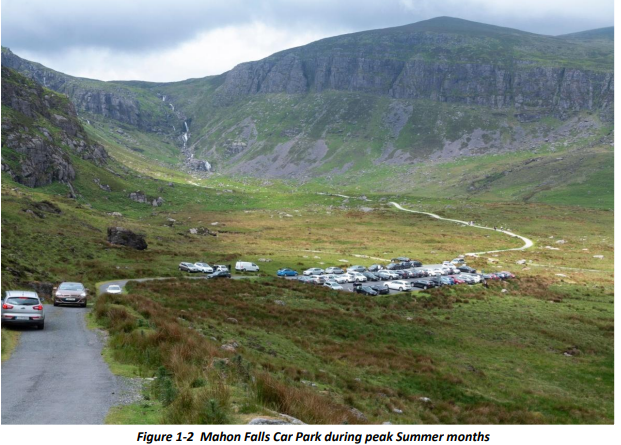 A PROPOSED extension to the existing Mahon Falls car park and additional road lay-bys is due to be decided by An Bord Pleanála on September 2.

During the April meeting of the Comeragh District, Cllr Liam Brazil (FG) sought the support of his fellow councillors for the proposal, which includes the extension and resurfacing of the existing car park to facilitate an additional 46 car parking spaces. It is also proposed to provide road lay-bys and the modification of existing lay-bys to allow for safe passing. Ultimately, car parking spaces will increase from 39 to 85.

Funding of around €200,000 has been provided for the project, but Cllr Brazil believed that there are people against the proposal. If people objected before the close of submissions, he said Waterford City and County Council may lose the funding to another county.

Senior roads engineer Gabriel Hynes confirmed that the scheme cannot progress unless An Bord Pleanála approves it. If it is not approved, he said the funding will be lost.

Meanwhile, Cllr Ger Barron (LAB) brought up the issue of parking in Mahon Bridge, particularly at Crough Wood. He said a new business opened there recently, and suitable parking needs to be provided. Cllr Barron received emails from residents expressing concern that their gateways will be blocked by increasing traffic at weekends.

Stating that all Comeragh Councillors have received e-mails regarding the issue, Cllr Declan Clune (Ind) said it was important to point out that residents don’t have a problem with the new coffee business that has been set up. Having visited the area, he said, “On busy days you would see more cars parked up there than City Square Car Park. So, I think we are obliged to do something. They are literally on every cross, on every junction and to be fair it is a fabulous facility up there,” he said. Meanwhile, Cllr John O’Leary (FF) described the situation at Crough Woods as an “inconvenience” to those living near there, and was hopeful that a solution could be reached. Cllr Brazil said the problem has been on-going for the past 12-18 months, with traffic parking at both sides of the road. According to the Councillor heavy goods vehicles can’t get through, citing an example of a driver who had to wait a full hour until the road cleared. The fact that residents are being blocked into their houses was also unfair, he said.

Cathaoirleach of the Comeragh District, Cllr Seanie Power said parking is becoming a huge problem at all of Waterford’s scenic spots, and suggested that a field at Crough Woods could be developed to accommodate 30-40 cars. He supported Cllr Brazil’s call for support for Mahon Falls.

Regarding Crough Woods, Mr Hynes acknowledged the parking issue, and said discussions have commenced with a landowner. In the interim the Council will look at placing a number of bollards in the area to protect access to existing houses, he said.