TIME OUT WITH TIMMY: Richard Garrick, Portlaw’s Man of Adventure 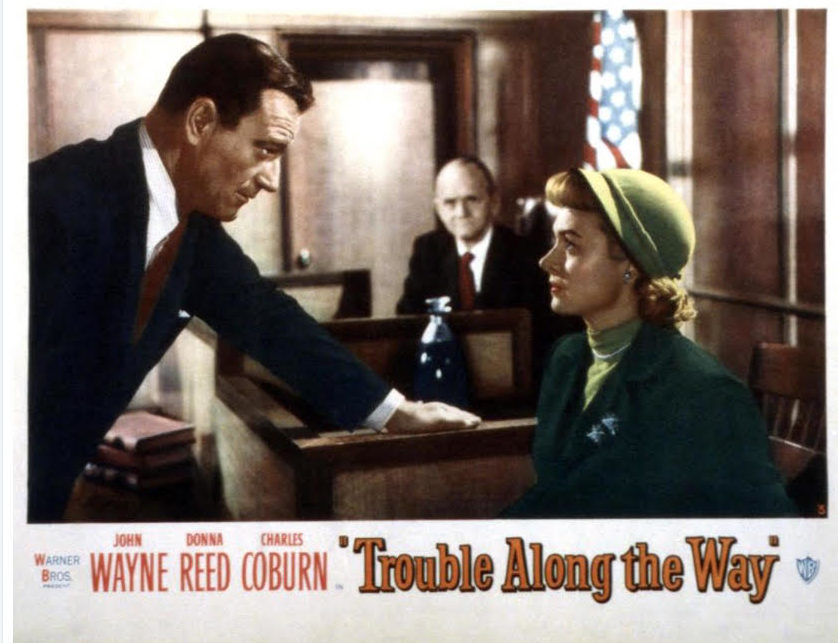 THE internet is a great place for taking you down rabbit holes that you never intended exploring. Mostly it is a dead end, but recently I dug up a genuine treasure. I was checking some information on Waterford actors when I came across an unfamiliar name; Richard O’Brien.

He was born in Portlaw, emmigrated with his family to the USA and had, what can only be described, as a life of true adventure. Reading what I could find on Wikipedia and the associated references I discovered that he’d appeared in several very well known films and had also had quite the military career as well.

Intrigued, I made a few phonecalls and was directed to Ger Crotty of the Portlaw Heritage Centre. Ger was most helpful and promptly got me contact details for a lady he’d met a few years back, a relative in fact of Mr. O’Brien. Within 24 hours I was on the phone to Karen O’Maxwell in Conneticutt USA.

‘In 1882, following the closure of the cotton mill, James said farewell to Brown Street, Portlaw, and relocated to Massachusetts… Two years later, his wife Johanna, a young Richard and his other children followed’

Richard O’Brien was Karen’s grand uncle and she had edited the Wikipedia page and also set up a website in his memory. We reminisced about his life and times and how his own father, James O’Brien, was a respected master tailor in Portlaw, counting Lord Waterford and many of the gentry as his clients.

In 1882, following the closure of the cotton mill, James said farewell to Brown Street, Portlaw, and relocated to North Adams, Massachusetts, USA. He doubtless had some knowledge beforehand of the lie of the land there as like Portlaw, North Adams had a strong Quaker influence and a textile industry, which would lead one to suggest the move to this location wasn’t random. Two years later, his wife Johanna, a young Richard and his other children followed.

Richard Thomas O’Brien, born in 1878, came 9th in a family of 11 and, aged 20, he joined the US Army. He served as a corporal in the U.S. 26th Infantry Regiment stationed in Miagao, Iloilo, in the Philippines during the Philippine-American War. Karen informed me that later he made national news for testifying before the United States Congress as a whistleblower on the atrocities that took place in the Philippines during his time there.

He returned to America, had a stint in the family tailoring business and from here things get quite interesting. Taking to acting, he was to take roles in and indeed direct several pictures in the silent film era and made his stage debut in New York in 1902. By now he’d adopted the name Richard Garrick. He joined up with the Gaumont Company and, in 1916, became Director General of Gaumont’s Jacksonville, Florida studios. He returned to Europe in 1919 and directed films in London and Paris.

‘He played opposite the legendary Marlon Brando in the stage production of, “A Streetcar Named Desire” that ran for a whopping 855 performances at the Ethel Barrymore Theatre in 1947’

In 1922, he was named production manager of a new film corporation in Italy. He directed films there as well as in the UK and France. In 1930 he opened the Richard Garrick Studio in California, where he taught drama, English, public speaking, and other subjects to young aspiring actors.

He played opposite the legendary Marlon Brando in the stage production of, “A Streetcar Named Desire”, directed by Elia Kazan that ran for a whopping 855 performances at the Ethel Barrymore Theatre in 1947. He would reprise that role in the film version two years later.

He pops up in “Quo Vadis”, the 1951 epic with Robert Taylor and Deborah Kerr. (The great Sophia Loren appears as an extra). “Viva Zapata!” in 1952 starring Marlon Brando again, saw Richard play the ‘Old General’ and that year he also appeared alongside Marilyn Monroe in “O. Henry’s Full House” playing the role of a doctor.

He had a part in “East of Eden”, the 1955 movie, which launched the career of James Dean and you’ll see him in the much loved “High Society” in 1956 as the Butler opposite Bing Crosby, Grace Kelly and Ol Blue Eyes, Frank Sinatra.

Overall, as Karen has proudly documented online, the list of stars Richard worked with in some capacity really is quite impressive. They include Julie Harris, Charles Laughton, Vivien Leigh, Maureen O’Sullivan, Anthony Quinn, Ronald Reagan, Ginger Rogers, Spencer Tracy, Robert Wagner, and the Duke himself, John Wayne in 1953’s “Trouble Along The Way” where Richard played the role of the Judge.

This man really put himself about. I can’t help but feel a little envious of how much he took on and got involved in. It’s amazing to me how much ground he covered in his lifetime yet sadly remains largely unknown in the land of his birth. From touring abroad entertaining US troops, to running a nightclub in Paris at one point, he strikes me as a man who had enormous passion for life. To say he had an adventurous spirit would surely be an understatement.

On one occasion, he lived with the acclaimed writer Jack London in Los Angeles while directing London’s screenplay of “Sea Wolf”. He undertook a Sahara Desert trek in 1924 and spent a few months with the Bedouin tribe. Then there’s his sojourn in exotic Tahiti where he wrote a novel called “Tahiti Holiday” and even found time to write a play called “Joan of the South Seas”; a remarkable appetite for creativity.

I assume he never married or at least we don’t have knowledge of a family of his own, but here again, with that amount of mileage on the clock, who’s to say we know all there is to know? With all that he did perhaps a dash of mystery is allowed and maybe it adds to the intrigue of the Richard Garrick story.

Karen told me she has been to Portlaw and has fond memories of meeting Ger Crotty and his Dad. She obtained Irish citizenship in September last year and is currently waiting to be able to apply for a passport. Portlaw will always be near and dear to her heart and once conditions for travel are favourable again, she is very much looking forward to returning for a visit. A keen Bodhran enthusiast, I’m sure she’ll be warmly welcomed in Portlaw anytime for the ceol, caint agus craic.

I’m grateful to her for taking the time to shed some light on this fascinating man and his exploits and sharing her research. I think a little honour going his way wouldn’t go amiss. Sad to think that while viewing lots of these old movies that I had no idea a Waterford man was on screen. Next time I’m watching “High Society” or “A Streetcar Named Desire”, I’ll be more than keeping an eye on the leading stars but will be looking out for the man from Portlaw who turned out to be so much more than just an actor.

Editorial: Irresponsible beach parking could have led to tragedy