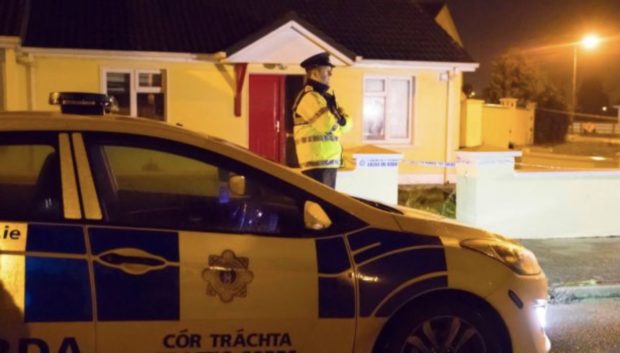 A Garda stands watch at the house where John Lowe was murdered by Stephen Keane in December 2018. Photo: Patrick Browne.

STEPHEN Keane (30) has been found guilty of murdering John Lowe (60) at his home in Portlaw on December 13, 2018. In The Central Criminal Court held in Waterford today, (May 25) a jury unanimously found Mr Keane, of Coolfin Meadows, Portlaw guilty after a trial that lasted almost two weeks. Keane had pleaded guilty to manslaughter but not guilty of Mr Lowe’s murder.

Throughout the trial, the jury heard from a number of witnesses, including Deputy State Pathologist Michael Curtis, Forensic Scientist Yvonne O’Dowd, members of Waterford Gardaí and witnesses who saw Mr Keane in and around the time of the alleged murder. According to evidence, Mr Keane claimed that he got into an argument with Mr Lowe over an alleged theft of money from a “silver box”. He said that he hit Mr Lowe with “one punch” and said that he “knew he had killed him because he caught him clean”. He made a number of other claims, including that Mr Lowe had come at him with a knife, which he sketched for gardaí. Neither the silver box, nor a knife matching the description were ever found by gardaí.

Witnesses who saw Mr Keane on the afternoon of the murder, described his behaviour as “odd”. One witness, Danny Bergin, who saw Mr Keane at 1:15pm on December 13, said that he “looked a bit tired” and that his “hands were swollen”. Another witness, Barbara O’Mahony, drove past Mr Keane as he stepped out onto the road in front of her. She said that he was swaying from side to side and “looked intoxicated”. Another witness, Des Kelly, testified that Mr Keane called to his home shortly after 1pm on December 13 but Mr Kelly wouldn’t let him in as his fists were bloody and he was acting very strangely.

The defence, led by Colman Cody SC, claimed that Mr Keane was too intoxicated to have intentionally murdered Mr Lowe. They also highlighted evidence showing that Mr Keane had attempted to resuscitate Mr Lowe, in an attempt to disprove the intent of murder. The jury heard that Mr Keane had initially left the scene, but returned a short time later with his mother. The jury were played a 24 minute tape of the 999 call, which showed the Emergency Medical Call Taker talking Mr Keane and his mother through CPR, which included the use of mouth to mouth resuscitation.

Evidence provided by Deputy State Pathologist Michael Curtis showed that Mr Lowe suffered “multiple wounds” with the fatal blow striking the “underside of the left ear”, hitting an important artery. This was at odds with Mr Keane’s assertion that he hit Mr Lowe only once. Evidence by Forensic Scientist Yvonne O’Dowd highlighted blood spattering, which also contradicted Mr Keane’s claim that he struck the victim only once. Mr Keane was brought to University Hospital Waterford shortly after he was arrested to receive bandages on his swollen hands. The jury heard that Mr Keane said that he would never intentionally murder Mr Lowe because he was his “only friend in the world”. The jury took four hours and three minutes to reach their verdict. Mr Keane will be sentenced on June 14.