Well Said: Gary Robinson on his one giant leap 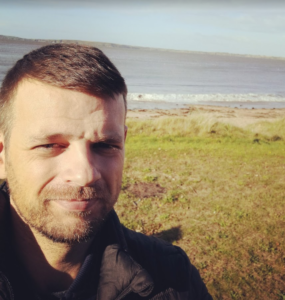 Having worked for many different companies over the years, Gary Robinson is now answering his true professional calling through exercise.

IN describing the actions of whom he described as ‘the exceptional person’, Bob Rotella, one of the world’s leading sports psychologists, once wrote: “He ignores information that suggests his dream is unrealistic. He just sets about making that vision a reality. He sees things before others sees them. He creates his own reality.”

Once we reach our 40s, some of us resign ourselves to a professional default position, a shoulder shrug followed by the, ‘Sure this is all I know, what else can I do at this stage’ type catch call.

Gary Robinson, who turns 39 this week, doesn’t rank among that cohort, much to his own relief and delight. Raised in Gracedieu, son of Sean Robinson and Maria (nee Gaffney) and brother to Karen, the Ferrybank resident and De La Salle alumnus grew up in a competitive sporting environment.

“That was just something I was brought up with, that competitive nature,” he said. “And that feeling has never left me. As far as I’m concerned, there’s nothing impossible. If you’re going to do something, then give it your best shot so anytime I take something on, I’m all in. I’ve never wanted to look back and realise that I could have done something better. And that’s what led me to take the plunge with my health and wellness coaching, which I got off the ground last September. In the middle of lockdown and all the restrictions, I decided to take the plunge and it’s been one of the best decisions I’ve ever made.”

Married to Selma (nee Cheasty) with whom he has two sons – Christian (9) and Lewis (4) – a certified personal trainer, Gary has, by his own admission, taken a long and winding road to reach his preferred professional destination.

“Yeah, it’s not exactly happened overnight,” he said with an audible grin. “My friends and sport (playing Kennedy Cup soccer with Waterford and at international schools’ level) got me through secondary school (De La Salle College) after I’d loved being in Stephen Street and it was really was a case of getting out of school as quickly as I could. So at 18, I went straight into Bausch & Lomb on three shifts and the money I was on was fantastic for a fella my age. I got my house out of it, aged 21 and I’ll always be grateful to that job for the home it gave me and that I still have. But I never had a vision of myself in any factory for a long time and after nine years, I got a day job at Store-All Logistics and ended up there for about eight to nine years. But again I knew in the long term it wasn’t for me; I still had that sense that I should be doing something else.

Gary continued: “So I went from there to WIT, the job I thought would be the move for me; it was nine to five, pensionable and my wife was working there as well – but I ran out of the place after two years. I hated it; I just wasn’t busy enough. That need to do something which challenged me was still there. That itch still needed scratching and my career choices were beginning to make me feel a bit anxious, a bit depressed even, I suppose. I knew there was something I wanted to do but I still hadn’t pinpointed it.

“Then I had six months in Eirgen, another good wage, and I didn’t like it enough. That feeling refused to go away. From there I went to Honeywell, part-time, as a logistics co-ordinator and this going from job to job was starting to cause a bit of anxiety at home, understandably enough. 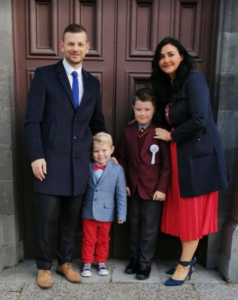 Gary, pictured with his wife Selma (nee Cheasty) and sons Christian (9) and Lewis (4).

“And it was getting on me, personally. I knew I couldn’t go on like this. I didn’t want the nine to five life until 65, just plodding away until retirement, clocking in and out, not really spending proper time with my wife and kids. I wanted to be fit, healthy and looking after myself and that’s when the penny dropped. I’d been helping people with coaching advice and how to get in shape throughout my time playing squash and soccer and after I hung up the boots. Advising people was something that came pretty naturally to me and while I was at Honeywell I started sharpening the coaching tool, so to speak.

“It really dawned on me that lifestyle coaching was what I wanted to do. A friend of mine asked me what was I waiting for; there’s no such thing as the perfect time to get into something like this so why not just do it? So I took redundancy from Honeywell, invested in myself, took the plunge and went headlong into it. Exercise had always been my outlet. It’s what keeps me on the level and now I’m putting it to good use and haven’t looked back since. It isn’t even like work! The feelings that I had always wanted from a career, I’m getting those now. It’s an incredible feeling.”

While the pandemic was hardly the ideal time to launch a business, Gary – now delightedly doing the school run with the boys – is offering coaching advice virtually and he’s been thrilled with the feedback he has received so far.

“I’m running my own business, helping people to lose weight and rebuild their self-belief, and working at times that suit me, something I’ve always wanted to do. I’m being the husband and father I always wanted to be and I’m putting those life-long competitive instincts of mine to practical use and building a new career out of it.” Gary Robinson, to coin Bob Rotella’s maxim, has created a welcome and new reality.