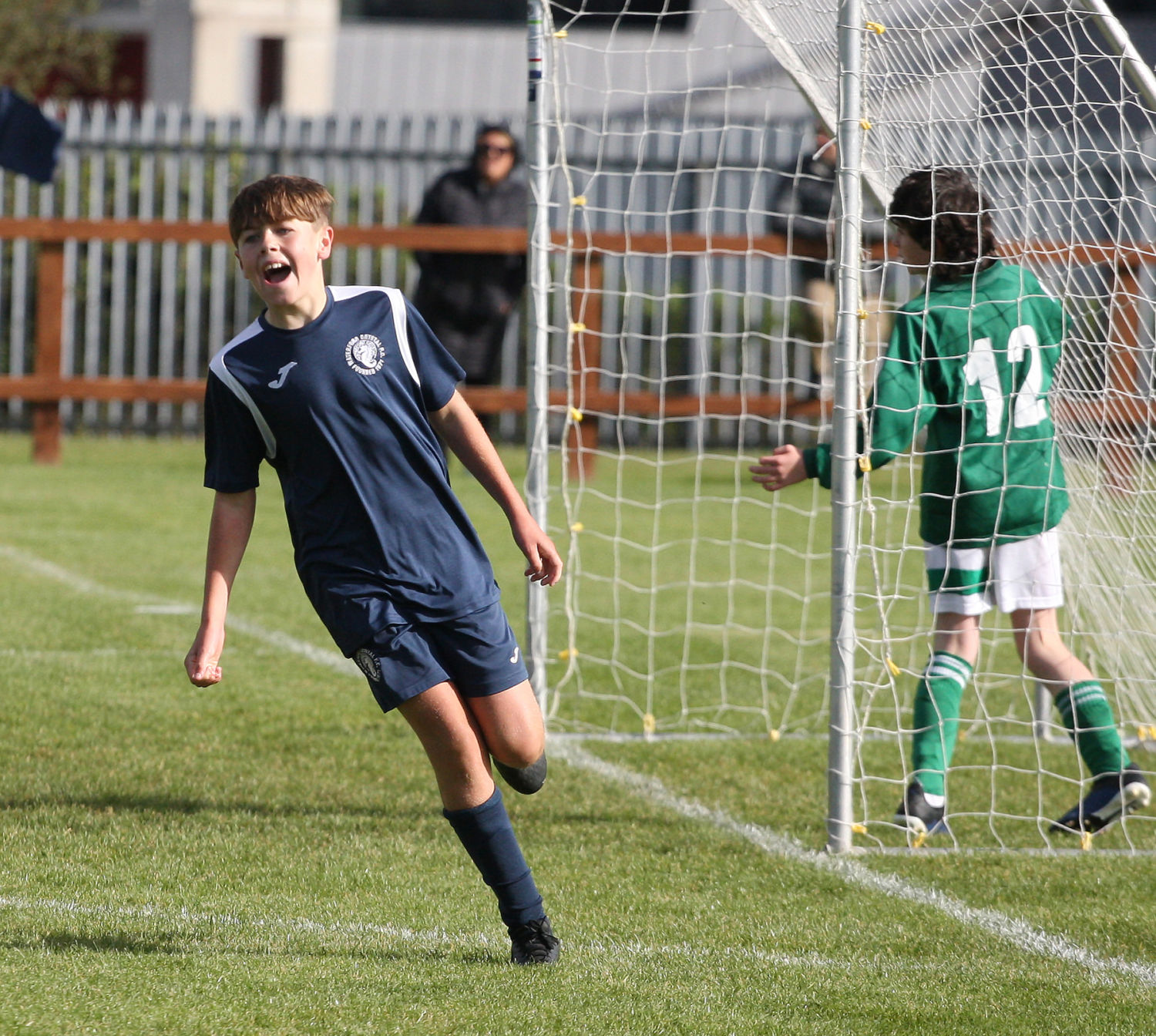 THE WSFL IS BACK: Ryan Butler of Waterford Crystal celebrates his second goal against Ferrybank in the U12A League at Crystal Park before the WSFL was halted last October. Photo: Paul Elliott.

The key message from the Waterford Schoolboy League secretary Pat Kelly ahead of the return to Schoolboy football action this evening (Tuesday) is that “the children enjoy the games, and that things are done in a safe manner within the return to safe play guidelines.”
“We’re delighted to welcome the children back to football again,” said Pat, and so say all of us. Without kicking a ball in competitive anger since October last, the season will resume with Under 15 games with the Waterford News & Star set to cover the meeting of Southend United and Villa at Connor’s Park.
But across the city and county, clubs have their return to football plans in place, and there will be get excitement when the actions resumes. It’s a big deal for the players, managers and coaches to finally get back to business with the 2020/21 season set to finish out a one-round league.
Although a number of the leagues will be finished by the end of July, there will be a couple of leagues that will carry over into August should they need to, and the target of the league committee is that the new season will begin on September 18.

A SAFE RETURN
It’s great that all lovers of Schoolboy football in Waterford will finally be able to go out and about again to games, whilst the referees are also looking forward to returning with Tramore’s Stuart Kennedy hoping that his “fitness” can hold up considering the amount of games that need to be done.
“I’m really looking forward to getting back next week. Fitness might be an issue, but other than that all should be good,” expressed one of our most experienced Schoolboy whistlers. These referees will play a massive role in ensuring that all games are officiated within the rules. It’s up to the players, managers, and especially the parents to make their life as easy as possible.
A total of 497 fixtures are needed to finish the league, and league chairman and fixture secretary Davy Cullen will be hoping that things run smoothly. “I’m just hoping that things go well for the children.
They’ve waited a while to get back playing, and we’re glad that we’re back. May I again take this opportunity to wish all club committees, all players, coaches/managers, management teams, referees, club volunteers, club supporters and indeed all stakeholders of the WSFL, including yourself, and all the sports journalists a safe return to play.”

U-15S TO KICK US OFF
There will be 11 games over the three Under 15 divisions to get things underway this evening with Southend to face Villa at Southend Park, Carrick United to host Tramore, and Piltown to make the trip to take on Bohemians. All these teams have only played one game each to date in the league.
In the Under 15B league, five games will see Park Rangers and Kilmacow, who both won their first game in action at Faithlegg, Cappoquin Railway, who won their first game, facing Seaview, Waterford Crystal hosting Bohemians B, Carrick United entertaining Villa, and Tramore B playing host to Mooncoin Celtic.
Connor’s Park will see its first game back in the Under 15C league as the Villa C team take on Ballinroad, Ferrybank hosting Tramore C, and Ballyduff taking on Park Rangers B at St. Nicholas’ Park.
There will be action in the non- competitive Under 11 league on Wednesday with a number of Under 13 games also scheduled before the Under 13 league continue into Thursday. The Under 12, 14, and 16 divisions will resume on Saturday where we’ll have action from a number of the leagues.
We wish everyone the very best of luck for the return to action and look forward to bringing you all the coverage including fixtures, results and tables every week until the end of the season as we build up to the 2021/22 season in September.