EXAMINATION papers have been released following this afternoon’s English examination for Higher and Ordinary level. Following a very pleasant and imaginative paper one, students were, by and large, going into paper two today with a strong portion of 50% behind them. As expected, the poetry questions for higher level featured Seamus Heaney, Eavan Boland, Paul Durcan, Sylvia Plath, and the final poet was John Keats. There were no surprises where the poetry was concerned, and indeed, I would be very surprised if students had opted to not answer the poetry section, as the choices were widely anticipated. 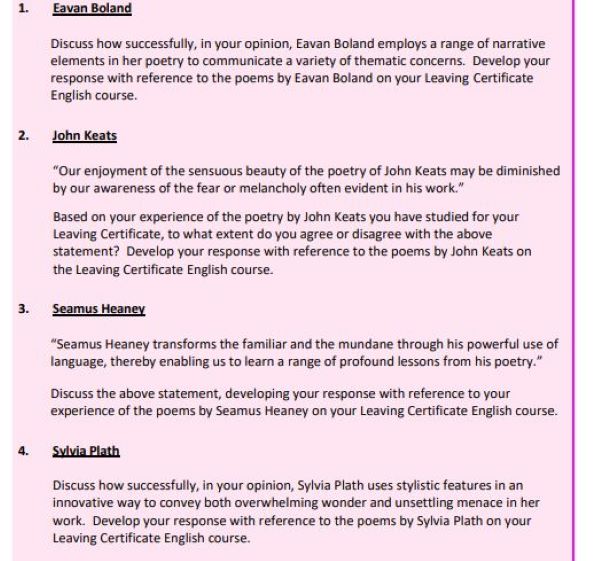 If students had prepared for Seamus Heaney, taking into consideration his universal appeal in depicting the extraordinary in the ordinary, they will have been rewarded today. Similarly, questions of tone were put to the student for Sylvia Plath, and the higher level student will have been able for this. The terminology ‘thematic concerns’ may have thrown some students who were answering on Boland, yet even if it did, it would have been relatively easy to interpret the meaning through the phrasing of the question. Generally, this was a very enjoyable and, dare I say, stress-free section, given that the Irish poets were there, the students who studied the female poets were rewarded also. The absence of Bishop may have been a curveball for some, but as long as they didn’t only prepare for Bishop, it was a pleasant section.

The single text options for King Lear were tougher than I expected, and students on reading the paper initially will have been a little challenged. Students this year largely prepared for the themes of good vs evil, power, and divine justice. However, a well-rounded knowledge of the play was rewarded here and the student will have been rewarded by referring to scenes such as the storm scene, Lear’s madness, the trial, and the brutality of Gloucester’s eye-gouging. Additionally, the themes of appearance vs reality will have supported the learning for this question.

It is immediately clear that a much lesser volume of students will have attempted (ii) given that Kent and the Fool, while important do remain on the periphery and are often studied as a contrast tool for other characters. Notwithstanding, I do think this was a very achievable and attemptable question, but only if the student calmly and systematically unpacked the question through an answer plan. 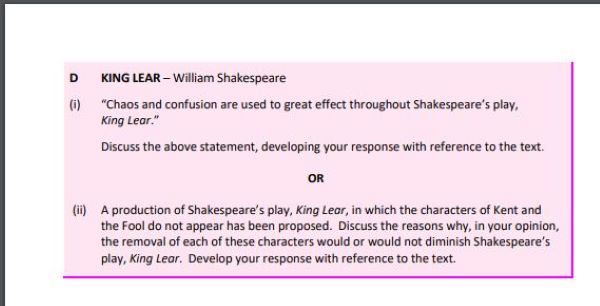 All three modes of the comparative study, as expected, appeared on the paper. Students needed to answer one mode, and within that mode there was a choice. Theme or Issue, not unlike paper one, asked the student to emotionally understand another character, to listen to their motivations and to respond to that. Students who struggle with expressive language will have been slightly uprooted by this question, but the vast majority will have welcomed the sight of the theme and issue questions. 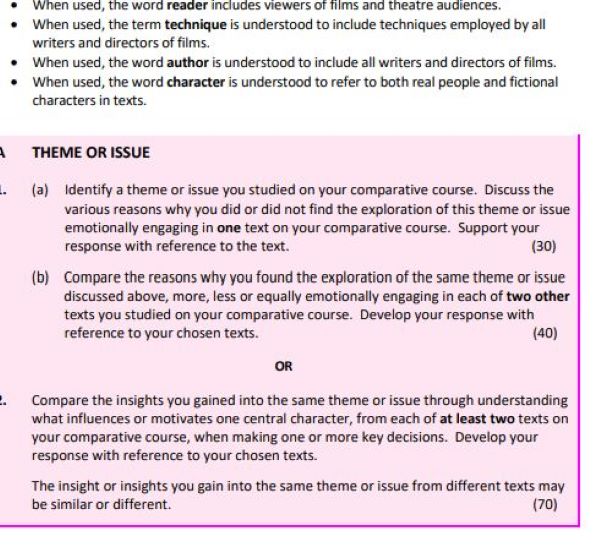 Cultural Context required some thought for the 70 marker question in order to look at social change. Students who prepared their grid with headings beforehand will have had a well-rounded understanding of the view of men/women, the distribution of power, the importance of love and marriage and the values which impacted freedom. While at first glance, this may have appeared challenging, students will have been able to break it down confidently.

General Vision and Viewpoint was a very pleasant question, rewarding the student who could comfortably say what made or makes them uncomfortable when looking at the plot of a text. Overall, each question this year, both in paper one and paper two showed a definitely deliberate attempt by the examination board to reward independent thinking, as opposed to blanket learning. A very positive move by the board, and hopefully a cohort of very satisfied students en route home later today.

To return briefly to the poetry section, the question differed slightly from the format of previous years in asking the student to identify aspects which made the unseen poem humorous or serious. Again, the student is asked not just to know the techniques, but to know their own mind and to be able to stand over their reasonings. The examination board were never likely to set a very challenging paper this year, and in my view, Lear was the only potentially tricky section, but they showed positive signs of moving towards a more inclusive and expressive style of questioning, which did surprise me. Overall, no unpleasant curveballs and the prepared student should have had no difficulty at all with today’s higher level paper. 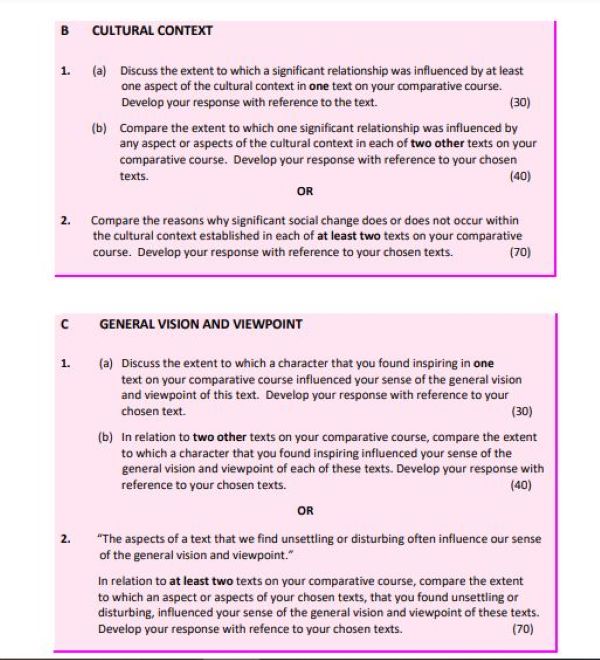