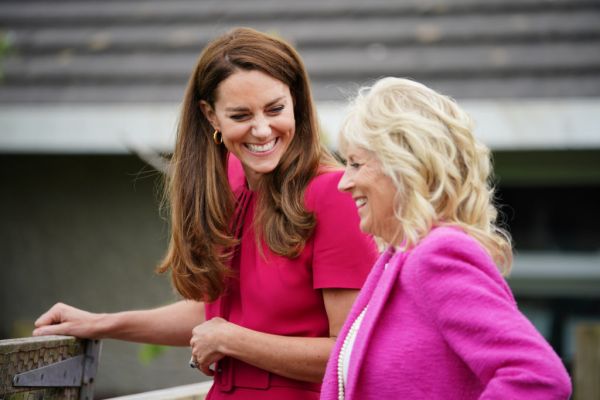 Britain’s Duchess of Cambridge has said she “can’t wait to meet” the Duke and Duchess of Sussex’s daughter, whose naming has sparked controversy.

Kate was quizzed about Harry and Meghan’s baby Lilibet at the end of a visit to a Cornish school with US First Lady Jill Biden.

The two women met for the first time at Connor Downs Academy in Hayle in the county of Cornwall where world leaders have gathered for their G7 summit.

A broadcast journalist from an American network put Kate on the spot when she asked: “Your Royal Highness, do you have any wishes for your niece Lilibet?”

The duchess replied smiling: “I wish her all the very best. I can’t wait to meet her because we haven’t yet met her yet, so hopefully that will be soon.”

She was also asked if she had spoken with Meghan: “Have you FaceTimed with her?”

White House aides and Kensington Palace officials then swiftly moved to end the impromptu press conference, asking journalists to leave the school room where the duchess and Mrs Biden had been taking part in a round table discussion with experts on the importance of the early years of childhood for future outcomes.

Harry and Meghan’s lawyers have written to the BBC after the corporation claimed in a report that Britain’s Queen Elizabeth had not been asked about naming their baby Lilibet, which was the monarch’s childhood family nickname.

It has been widely reported that Harry and Meghan did consult with the queen before the name of their baby, who was born in California last Friday, was announced.

A spokeswoman for the Sussexes has said their daughter’s name was mentioned by Harry in a conversation with the queen and “had she not been supportive, they would not have used the name”.

‘I was a troll, full stop’: Chrissy Teigen apologises after online bullying controversy

She’s back! Charlie Brooks returns to EastEnders as Janine Butcher