Foster vows to seek better protections for everyone on social media 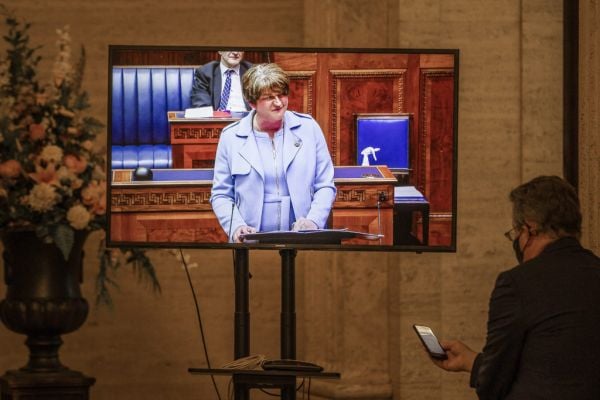 Arlene Foster has said she is looking forward to “fresh challenges” following her resignation as Stormont’s First Minister.

The ousted DUP leader told the Northern Ireland Assembly she planned to seek better protections for everyone on social media.

She added now was the time to act as young people have “no escape” from bullying.

Mrs Foster’s resignation as First Minister came into effect at 1pm on Monday.

Delivering her personal statement to the Assembly, Mrs Foster said: “This will be my last speech in this forum, but I very much plan to continue to speak up on behalf of women in public life, as well as our children, by seeking better protections for everyone on social media.

“When I was at school bullying occurred but, when children stepped off the bus, their home could be a safe haven.

“Today, our young people have no escape, the bullies are following them right into their bedroom.

She said she intended on spending more time with her family.

“Suffice to say, just like all politicians who resign, I will now spend more time with my family,” Mrs Foster said.

“So my lovely mum, my darling husband and my three beloved children will see more of me, whether they like it or not.

“It’s just as well, Mr Speaker, I am such a good daughter, wife and mother.

“Those of us in public life know that we cannot fully function without the support of our loved ones and I’ve had that support in abundance.”

She wished her successors as party leader and first minister well, and also thanked politicians from across the political spectrum for their good wishes.

“I’ve been overwhelmed – even some in the naughty corner found something good to say,” she said.

“If only you had said all those nice things a few years ago, it would have saved us all time.”

She also said her time as first minister may have “come to a close abruptly” but her passion for service for the North and the Union remained.

She vowed to pursue “unfinished business” in championing the North in other ways.

“This particular chapter may be closing, but I intend to write some more in the years ahead, for I have unfinished business to ensure Northern Ireland succeeds in its new century,” she said.

“I believe strongly in the good sense of the people of Northern Ireland to continue to recognise the value of our place within the United Kingdom.

“A UK that has helped see us through the worst ravages of the Covid-19 pandemic with unprecedented financial support.

“And a national vaccination programme that is the envy of the rest of the world.”