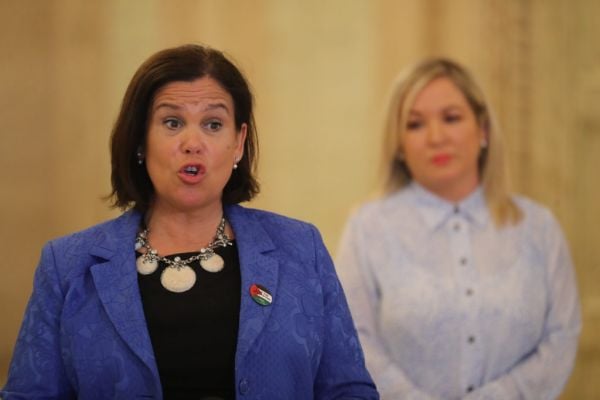 Sinn Féin has called on the British government to intervene and legislate for Irish language protections at Westminster.

The clock is ticking on the future of Northern Ireland’s powersharing Executive following the resignation of Arlene Foster as first minister.

An ongoing stand-off between Sinn Féin and the DUP over Irish language legislation could topple the institutions unless resolution is found in the coming days.

Following a meeting with Britain’s Secretary of State for Northern Ireland Brandon Lewis, Sinn Féin said the introduction of long-awaited Irish language legislation is “the only way to resolve this issue”.

Speaking late on Monday, party leader Mary Lou McDonald said: “This evening we met with the British government and told them that they need to move the Irish language legislation through Westminster.

“A number of weeks ago the British government offered to legislate for Acht Gaeilge (Irish Language Act) in this way,” Ms McDonald continued.

“At that time we said our preference was that Irish language legislation would be delivered through the Assembly and Executive as was agreed in New Decade New Approach.

“We have pursued that option vigorously over the last number of weeks.

“We have engaged intensively with the DUP and with party leader Edwin Poots. He has told us that they will not be delivering Acht in this mandate.

“This legislation was negotiated a year and a half ago and it is now incumbent on the British and Irish governments to act.

“This is the only way forward to finally resolve this issue.”

Mrs Foster’s formal resignation on Monday as joint head of the devolved Executive begins a seven-day timeframe within which the DUP must renominate its chosen successor, Lagan Valley MLA Paul Givan.

However, the joint nature of the office Mrs Foster shared with Sinn Féin’s Stormont leader Michelle O’Neill means Ms O’Neill must also be renominated to her role within those seven days.

If one of the parties fails to renominate within the time period, a properly functioning executive cannot be formed and the UK government assumes a legal responsibility to call a snap Assembly election.

Making her resignation speech to the Assembly chamber, the ousted DUP leader addressed the row over the Irish language that threatens to destabilise the institutions.

“We can poke each other in the eye and have a competition of ‘my identity is better than yours’ but it is only by respecting each other’s identity that we will move forward.

“The beauty of the Union is that we can all have our identities and live here side by side.”

On Sunday, a simmering row escalated when Sinn Féin made clear it would only engage in the renomination process if it was accompanied by the commencement of legislating for protections for Irish language speakers.

On Monday, DUP leader Edwin Poots said there could be no preconditions attached to the nomination process.

He reiterated that he was committed to implementing all outstanding aspects of the 2020 deal to restore powersharing, including Irish language legislation.

However, he declined to indicate whether he would move on the language laws in the current Assembly mandate, a Sinn Féin demand, and insisted there were other priorities the Executive should be focusing on, including the health service and economy.

He said: “Setting pre-conditions is not appropriate, it’s not respecting someone’s mandate, and we cannot be in a circumstance where we have pre-conditions set for the selection of our first minister.

“And I’m not setting pre-conditions to the selection of Sinn Féin’s deputy first minister.”

But Ms O’Neill warned the new leadership of the DUP that powersharing cannot be built on broken promises.

Ms O’Neill, who stood opposite new DUP leader Edwin Poots in the chamber as she made her remarks, said there is a need to work on the basis of “openness, transparency, accountability and in good faith”.

“That’s the only way in which we can share power together,” Ms O’Neill added. “All of us in this chamber are called upon to lead. That means leading and delivering for everybody.

“That means delivering a powersharing that’s grounded in fairness and inclusion.

“That’s certainly what I’m here to do. I hope that we have willing partners in which to do so also because you can’t build powersharing on broken promises.

“You must deliver upon agreements that are made. I’m committed to do that. I hope others are also committed likewise to doing that.”

Examiners and attendants lose out on €34.8m pay bonanza due to exam cancellations