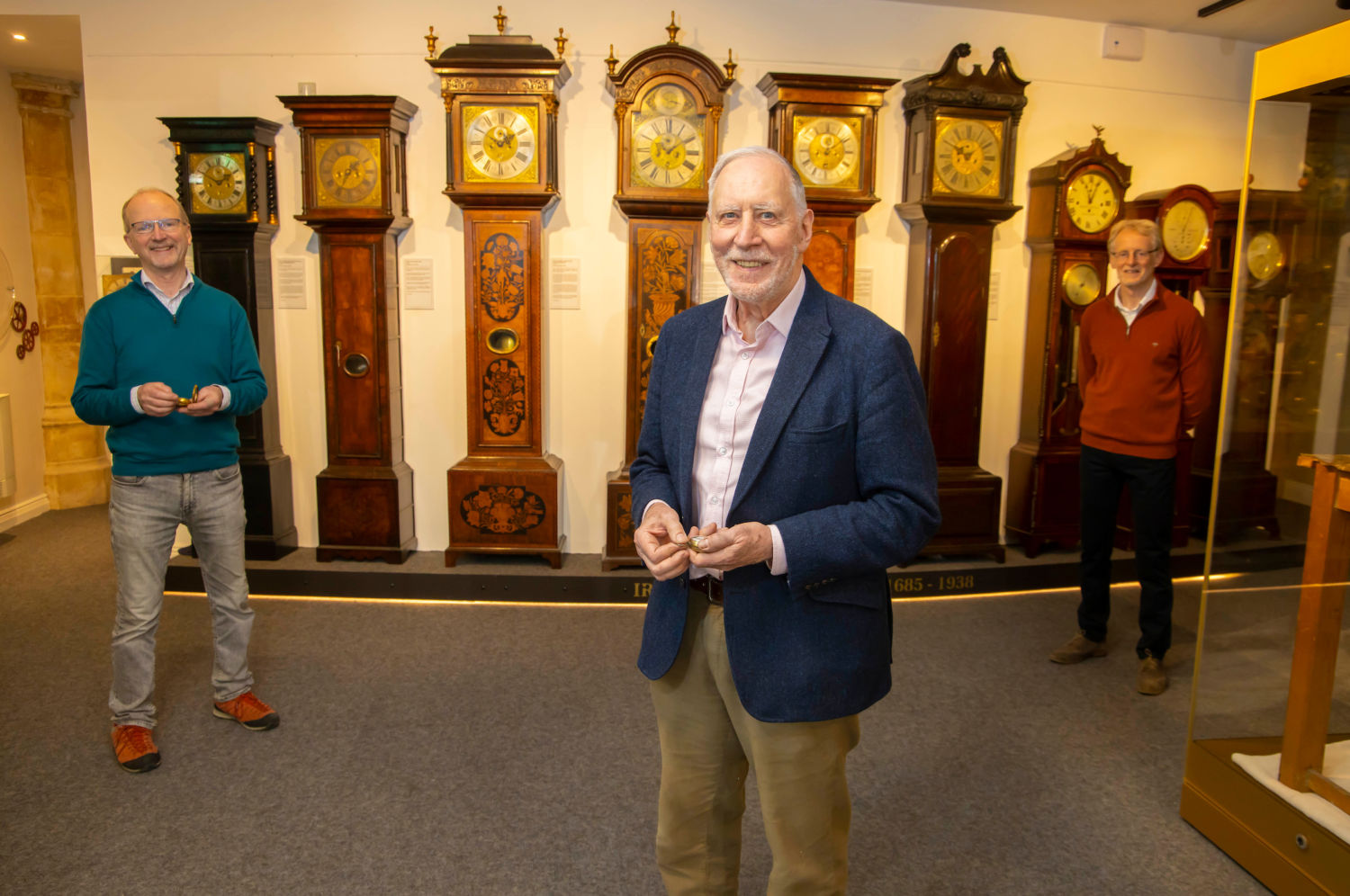 Pictured, from left, Colman Curran and David Boles, whose lifelong collections have been gifted to the Irish Museum of Time, and Eamonn McEneaney, Museum Director. Photo: Patrick Browne

WATERFORD’S museums continue to expand and the latest, the Irish Museum of Time, which is situated in Greyfriars beside Luke Wadding’s statue, is something special. I don’t know what it is about clocks that always draw me to them. Is it the beating heart of the mechanism? …that tick-tock-tick-tock that reminds me, to quote the Bard, “of our minutes hastening to the end”… the silent aura they create in a room… or the clock-bell of our childhoods that called us to class? While time regulates our lives, the construct of time is another kettle of sardines.

I’m with Eamonn McEneaney, curator of Waterford Museums, and he’s just proud as punch with his shiny new Museum of Time at Greyfriars. Why wouldn’t he be? “Look at this collection,” says Eamon with his hands sweeping wide to embrace the whole expanse of it, “you’d stand in the snow to look at it.” And stand you would because this museum celebrates the incredible skills of the virtuoso craftsmen who, since the seventeenth century, created timepieces of remarkable beauty and technological genius.

‘My own favourite? The Russian reverse clock that has to be read backwards from a mirror’

There are sundials here from 1738 that I’m assured are, “incredibly accurate because they were created for a specific place and a specific person.” Like the sundial in Irish for the parish priest of Rosbercon just outside New Ross. “Virtually, all the time-pieces here on the ground floor are Irish time-pieces,” informs Eamonn, as he shows me a 1551 clock that is “one of the oldest in the world”. A Wm Clement of London pendulum clock from 1663, that is worked in gilded brass, is the first of its type and was absolutely accurate.

There’s a 9ft high 1720 grandfather clock here from Dublin that is the tallest grandfather clock in the world. A bracket clock in tortoiseshell – “same price as gold” says Eamon – was manufactured by Richard Kiely of Lismore in 1705. All the time-pieces carry the name of the maker and retailer with some odd political comments, such as James Given of Ballymena’s subversive “no pope here” for some unwitting Catholic customer. Brogan of 23, Michael St., Waterford, blazes across a magnificent 1821 grandfather clock set in walnut. Sadly, Philip Brogan’s life ended badly – transported to Van Diemen’s Land for seven years for selling on a watch he was repairing for a client. He lasted just two months in that hell on earth.

“These two turret clocks from 1590 have no faces,” explains Eamon, “their mechanisms just rang bells on churches to let local people know where they were at during the day. One of the features of the museum is that the inner workings of the clock are often displayed so that children can understand the mechanics of the time pieces.

The inner workings of the time-pieces are incredibly detailed and ornamented despite the fact that, amazingly, no-one ever got to see them other than other clock-makers. Many of the pieces had very detailed musical settings that rang out to the delight of their owners and the astonishment of passers-by. “Without these time pieces, there would have been no technological or industrial revolution,” reflects Eamon and, to prove the point, shows me a microscope that was the “best in Europe” for over 50 years. “That,” declares Eamon with that ‘g’wan the Paddies’ pride we all share, “was manufactured by clockmakers Grubbs of Dublin.”

There’s an upstairs floor that acts out the truth of Eamon’s observations. A cabinet of extremely rare railway watches, dedicated to the memory of Anthony Brophy, that can only be adjusted by their owners in order to prevent train crashes, features just inside the door. A maritime section features a chronometer – the only one of the period – that set the time for shipping in a world where accurate time was the difference between life and death alongside a lighthouse clock from 1800.

There are displays here from countries all over the world – Switzerland, Britain, America, France, Austria, Italy and Holland with clocks the size of cranes and another watch the size of a cufflink. The smallest grandfather timepiece in the world that would fit into your pocket is here along with fob watches as big as a giant’s cricket ball and frequently made in gold. The Japanese don’t like to show off their time-pieces – for fear of offending visitors – and the Lafcadio Hearn table of books is just the perfect addition to this section.

My own favourite? The Russian reverse clock that has to be read backwards from a mirror – the frontage gives information on temperature, humidity and some other odds and sods reserved for readers of Russian that even Eamonn can’t translate.

The story of how Ireland made the leap from sundials to enormous turret clocks and finally achieved the most accurate clocks and watches in the world is told in this spectacular new museum.

The official opening of our brand new Irish Museum of Time took place in Waterford with Minister Malcolm Noonan yesterday, June 14, at 4.30pm.

The museum was made possible thanks to the remarkable generosity of David Boles, Colman Curran and Elizabeth Clooney whose lifelong collections were gifted to the museum.