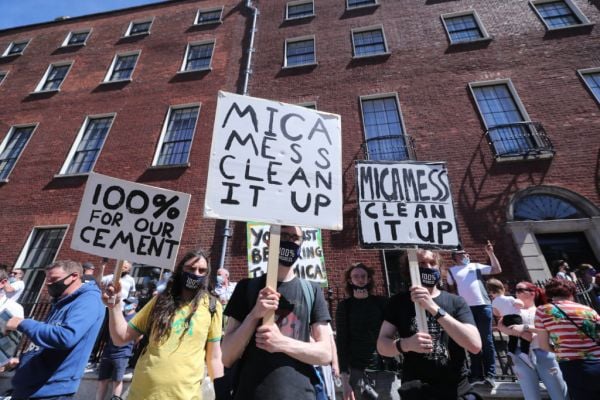 Fianna Fáil’s Marc MacSharry has suggested he will leave the party if the Government does not deliver a full mica redress scheme to homeowners.

The backbench TD told Newstalk radio that any changes to the mica redress scheme should ensure 100 per cent cover for remediation works.

The Government is under pressure to meet the full costs of remediation works, after thousands living in crumbling homes protested in Dublin over the scandal earlier this week.

Sligo-Leitrim TD MacSharry said he supported the demand for 100 per cent redress.

“That’s what it needs to be for me, and I know Dara Calleary has said that if it comes to standing with the people or the party on this issue he knows what he’ll be doing – I’ll be standing with him,” he said.

It was reported earlier this week that another Fianna Fáil TD, Mr Calleary, suggested he could leave the party if full redress was not offered to those whose properties have been impacted by mica.

Mr MacSharry added: “If they’re going to let people’s houses fall down around them – having looked after people in Dublin and Leinster, then that’s a big, big problem… you’ve got to look after people.”

The Government has previously stated that covering the costs caused by mica would be in excess of €1 billion.

The issue has predominantly impacted properties in counties Donegal, Mayo, Sligo and Clare, causing the structures to crack and crumble.