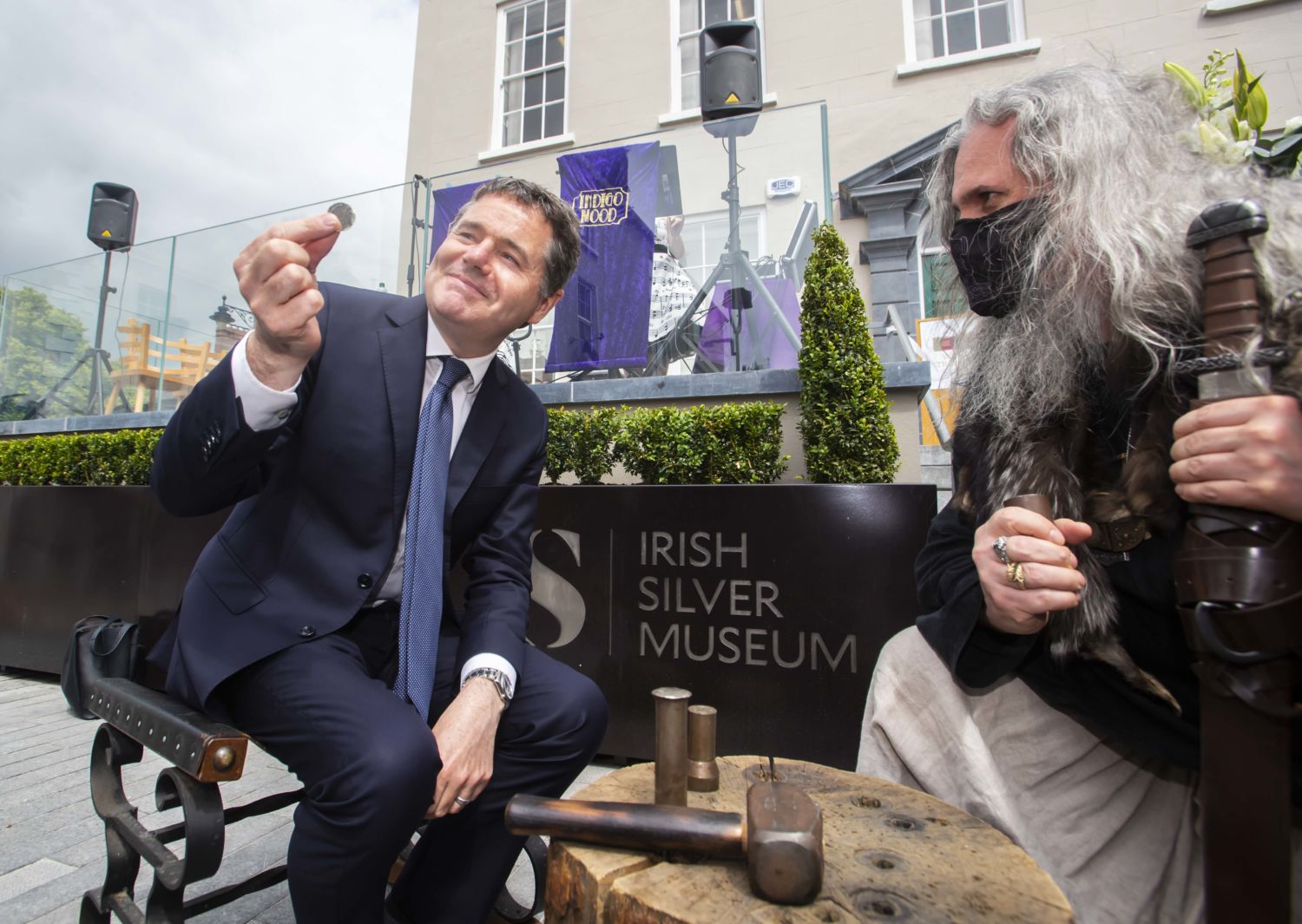 Pictured at the new Irish Silver Museum in Waterford where Minister for Finance Paschal Donohoe participated in a Viking coin creation by striking a coin – a replica of a coin found at the Woodstown Viking site in Waterford in 2005. The original was minted in 742. Also photographed is Sigtrigg the Viking. The museum is home to one of the largest collections of Irish silver in the world and was officially opened by Minister Donohoe last week. Photo: Patrick Browne

LAST Thursday I sat in Cathedral Square to listen to Minister for Finance Paschal Donohoe open the new Irish Silver Museum. He was generous with his praise for what has been achieved. He called it the Irish Smithsonian. It is worth mentioning again that local builder Noel Frisby’s generosity facilitated the development of the museum, which, if you have not seen it, is a Gringott’s Harry Potteresque fantasy on all things silver. It is quite magnificent. It has come to pass that Waterford has opened two museums of international standard and class in the space of two weeks after the worst modern medical pandemic this country has experienced. The two museums were developed largely on the back of private funding. That seems to be the way things work in Waterford. Do it yourself or it’s not done at all?

Many people must have asked themselves what would be in the Deanery building if the silver museum had not been developed. A motor tax office perhaps? The late Hon Desmond Guinness of the Irish Georgian Society always lambasted the Dublin-based civil service who colonised historic buildings as a result of which fabric was destroyed as buildings were altered to cater for official needs. There is nothing that adds to the attraction of an historic building quite like a pile of 1998 Golden Pages telephone directories stacked carelessly in historic window spaces. Irish people are visually illiterate I suppose, we don’t see things, and in Waterford we are particularly afflicted as anyone who has passed the little garden dedicated to the memory of political activist Dr Noel Browne in Bath Street might agree. Overgrown, uncared for, neglected!

It is not necessary to heap praise on what the staff of Waterford Treasures have done over the past decade. They have brought excellence to this city. I particularly thought of this while talking to a city councillor who said that the council had lost a possible €10 million Fáilte Ireland grant for a new visitor experience on the old An Post office site at Keizer Street. The council’s “Economic Development Department”, an oxymoron in anyone’s terms, applied, using paid consultant’s advice, to construct a “Viking experience”.  Apparently, in their wisdom, the bean counters decided not to seek the advice of anyone in our museums, who presumably might know too much, whereas brought in, bought in consultants will do what they are told? And of course they can always be blamed when the project fails to launch as has happened in this case. I am not sure that we need a “Viking Experience”, it is redolent of the failed Celtworld experience delivered at great and expensive loss on Tramore some years ago.

This falls into that category of project beloved of local authority officials keen to find an easy answer to a long term difficulty. It is the search for the magic beans which will deliver mass tourism and mass visitor numbers. Waterford is fighting desperately to make the change from perceived industrial centre to sexy and attractive visitor centre. Our officials search for another Kilbarry Glass Factory. In my opinion that never delivered tourists either, it decanted people into local hotels at 6pm and removed them to Kilbarry at 9am the following morning. But it gave the impression of tourism numbers and success even while presentation levels in the city were appallingly low. It is possible with very large resources to make a headline grabbing single investment, which turns the fortunes of a city around, but we do not have those resources.

Making the city beautiful on a systematic, planned and coherent basis has to be the way forward. It has to be worked at. Flowers, planting, trees, pocket gardens, maintenance of parks and public spaces, in the long, slow and hard slog of building a reputation for the kind of style and panache that our museum sector has while we search for the magic beans and our desired beanstalk.

The North Quays project, which we must stick at, falls into the latter type of category: the search for an answer to all the problems of office space, new housing and retail, better developed urban core, etc. etc. Our council committed huge amounts of time and resources to this project (and we cannot fault ambition), which, in hindsight, actually needed a well-funded, separate development authority or agency structure to deliver it. The project diverted focus from the historic city centre and the perception of neglect has arisen. You will find no one, in my experience, to argue the latter point. The council has, in sporting parlance, lost the dressing room. Major public realm works were delivered, but these on their own are not the panacea for survival. The development shy nature of local business and property owners and associated development inertia and unwillingness to do what the business sector in every city has to do if it is to survive (invest in their own place!) has brought us to a difficult situation.  WIT’s Ray Griffin has described Waterford city as being incredibly resilient, but resilience without results lasts only so long before it becomes soul destroying.

In many ways the legal action for housing by members of the Travelling community at Carrickphierish underlines a lack of focus on the city which has been obvious. Regardless of how this turns out, when it gets into the grip of the wigged “me luds”, it is certain that the council was not on the ball there for quite a long time.

The difficulties of our small city are of course exacerbated by regional politics. Martin Cullen as a local representative delivered for Waterford during his career. The corollary to that was a political reaction in Carlow/Kilkenny and Wexford to ensure that Waterford’s development would be curtailed. The stratagems of Phil Hogan and Brendan Howlin have borne poisoned fruit for Waterford. The city lost its independence, VECs were plundered, hospital groups undermined UHW/ WRH. WIT is on the chopping block for dismemberment. How could anyone vote for Fine Gael in this constituency, ever again?

When you read this we will be at the beginning of the third quarter of 2021. Two years ago it was announced that a new engineering building for WIT, first planned in 2009 and cancelled in 2011 by Fine Gael, would go to tender in quarter 1 of 2021. Six months after that deadline there is not a sign of it. The TUSE is turning out to be a monstrous farce in which the joke is on Waterford. We were told earlier this year that goodies uncounted would land on WIT if only we accepted the TUSE. Local politicians and business worthies were tempted by Waterford’s arch nemesis, Simon Harris. Just agree with my little scheme and everything you desire shall be yours. Not really, not ever! The “tsunami of funding” will eventually turn out to be an announcement that the engineering block is to be built. Our local TDs and senator will be beside themselves in ecstasy as the mountain goes into labour and produces a mouse!

In the past weeks as Ireland has been transfixed by the hundreds of millions at stake at St Vincent’s and the new National Maternity Hospital, it is obvious that the tiny resources necessary, by comparison, for Waterford, UHW and WIT would be delivered without demur by any fair-minded government. But as the dead hand rises up to claw at our tiny regional airport we can see that this government will never let a good crisis pass without hurting Waterford.