WellSaid: Anne O’Rorke on the plight of the forgotten 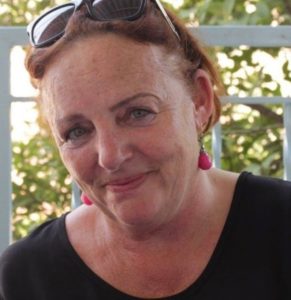 Anne O’Rorke’s dedication to Syrian refugees in the Turkish city of Izmir has not wavered.

ROBERT FISK, whose wisdom is sadly missed from the perpetual melting pot that is the Middle East, described anger as “a ferocious creature”.

In the preface to his 2008 tome, ‘The Age of the Warrior’, Fisk describes the supposed objectivity journalists are meant to retain while witnessing mass suffering as “the great sickness of our Western press and television… the excuse for all us to avoid the truth”.

During two lengthy conversations with South Parade native Anne O’Rorke, conducted 15 months apart, the unavoidable truth facing thousands of displaced Syrians in the Turkish city of Izmir struck me right between the eyes.

Scratch that, Anne’s words, justly delivered in partial resignation given what she faces every day, kicked me firmly in the gut.

The contrast between the Covid-related quibbles of we Irish, mostly sitting in heated, plumbed homes with well-stocked fridges, and the reality facing Syrians who have been thieved of stability and hope, put manners on me. Anne’s message was a necessary course correction for this interviewer. I have health, home, food, water and love. What those 3.7 million Syrians effectively stuck in Turkey today wouldn’t give for what I have.

“Covid has hit the refugees here in Turkey really hard,” said Anne, the founder of TIAFI Community Centre, which assists women and children displaced by the Syrian War.

“If you’re a mother with three children – whose husband is either missing or presumed dead in Syria – you’re getting €36 a month, which is coming from the EU (a €6.5 billion fund) to the Turkish Government – but that’s all of the income that you would get – and that’s if they’re lucky.”

Lucky? Anne explained: “Prior to Covid, refugees who were working were doing the worst and most poorly paid jobs, behind kitchens, scrubbing floors and the like. But if you were a parent in one of those jobs that’s gone due to Covid, right now you’re getting nothing, not one penny. And this has created a new poor group within the refugee community: families who are getting no EU-funded money and these are the people we are trying to support at the moment and I have never seen anything like it. We’ve a waiting list of 3,000 families – roughly 10,000 people – that’s about the population of Tramore. And all that they are asking TIAFI for is food. And to go to some of these families’ homes, with nothing in them, some like coal bunkers – it’s just heart-breaking. These aren’t even comparable to the Irish tenements of a century or more ago. Some are living right next to a supermarket in a basement with no doors or windows and they’ve got no food. It’s awful.”

“We’ve a waiting list of nearly 3,000 families asking us for food.”

Many of the refugees Anne has met through her work are “you and me”, she said. “These were third level professors, postmen, people from the Syrian professional class and this is what they are now reduced to. Things have got so much worse (since our first conversation in March of last year). The Turkish economy is not doing well and the Lira is dropping like a stone (in value). Refugees who might once have been able to afford tomatoes and rice now can’t afford the tomatoes and they can no longer afford the oil they always cooked with. The situation is just horrific at the moment.”

Izmir, which currently has 60,000 refugees on top of its official population of three million residents (making it Turkey’s third largest city), does not have a host of charities and other bodies distributing food.

“It’s just us,” Anne said, to my near disbelief. “We’re the only organisation in Izmir doing this for Syrian refugees, which makes this very hard for us and for me personally. To have to decide who among those 3,000 families gets one of our 150 food parcels (prepared daily and worth €20) is incredibly hard because all of them need food. Trying to figure out who is the worst off is such a difficult thing to do. To have people coming into us crying and not necessarily being able to help all of them is so, so difficult. We also give out 200 portions of food a day from our kitchen so we’ve got a lot of people queuing up on a daily basis which is the best I can do.”

Every week, in the centre’s two sports rooms, TIAFI caters for 68 children with disabilities on its flexibility and exercise programme. 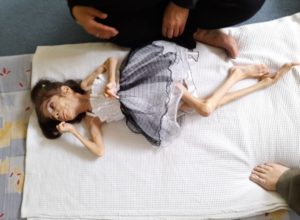 Leina is one of 68 children accessing TIAFI’s Exercise and Flexibility programme.

“Some of these suffered in the (Syrian Government’s) chemical attacks and to think there are some politicians back home suggesting otherwise has enraged me. We’ve seen at first hand the consequences of those who have suffered gravely, who have lost limbs, who have scoliosis, who have Cystic Fibrosis and other bomb-related injuries. To see children getting sicker and thinner by the day, it’s not easy.”

I ask Ann how she is coping with all of this. “Look, it’s not easy but I’m tough and when you can actually do something, that does actually make it easier to cope with. What really upsets me is to have certain Irish politicians spouting nonsense when I think about what I see with my own two eyes here every day. People might think that a refugee in Turkey has it good: sure don’t they have the sun and so on? Syrian people are living in conditions worse than the favelas (in Brazil) and they’re in a country where they are just not wanted.”

Anne’s daily reality is a far cry from the red-bricked comforts of South Parade but her commitment to the cause is unwavering.

“I’m in the centre every day, doing what I can. But the hardest thing about all of this for me is that this has been forgotten about by the outside world. How is that possible?”

For more on the work of TIAFI, please visit tiafi.org