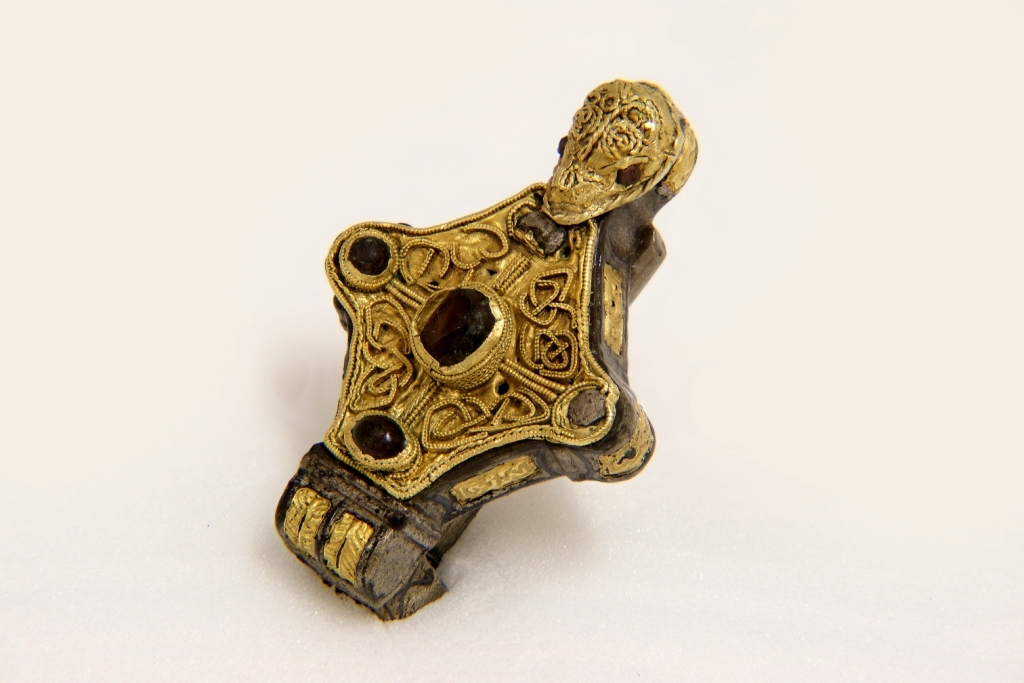 I’M in the company of Rosemary Ryan of the Waterford Treasures Museum for a tour of the new Irish Museum of Silver and Rosemary’s knowledge of silver is as dazzling as her subject. “If you need to know why the recent Woodstown excavations are so important a find,” enthuses Rosemary, “just take a look at this lot.” The famous ‘Kite Broach’ from the Arundel Sq. excavations sits beside a tray of silver pieces that have been melted down for silver.

Viking raiders sought silver artefacts because silver was the only truly international currency, as Rosemary points to a silver coin, as big as a fingernail, that was minted in modern-day Iraq, looted or bartered by the Vikings and brought to Waterford in 850 to prove her argument. “The Vikings melted everything down,” explains Rosemary, “and then wore the silver in thin lines on their sleeves for use as barter,” as she points to a tiny balance scales used for measuring the weight of the precious metal.

Silver as a currency always made far more sense than gold simply because it was more freely available. It made perfect sense. For millennia it was always silver, not gold, that was the real basis of the domestic economies: the foundation for most money-of-account systems, for payment of wages and salaries, and for most local retail trade. In 14th to 15th century England, most highly paid skilled artisans earned 6d a day (six pence, or 5.4g silver in the mid-15th century), while a whole sheep cost 12d (or 10.8g of silver). Even the smallest gold coin, the quarter-noble of 20d, with 1.7g fine gold, was of little use for domestic trade.

The first part of the museum takes us on a journey through Irish social and commercial history, using intimate and personal silver objects as reference points. Chalices are big in this museum– as you would expect – given that every priest had his own personal chalice. Of course, the Waterford Chalice is here from the parish of Kilculliheen, across the river, and the famous Lukar Chalice is also here. Made of silver and gold in 1595 for Fr John Luker in the Franciscan Friary, this is the oldest surviving Waterford chalice in existence and was made at a time when the Franciscan Friary in Waterford had been suppressed for over 50 years.

I stop and marvel at Fr. Geoffrey Keating’s chalice and I feel the hand of history on my shoulder. Keating, from the Diocese of Waterford, is better known to Gaelic scholars as poet and scholar Seathrún Céitinn – one of the two greatest poets in the Irish language and the author of ‘Foras Feasa na hÉireann’, the first history of Ireland, which was written in 1634. 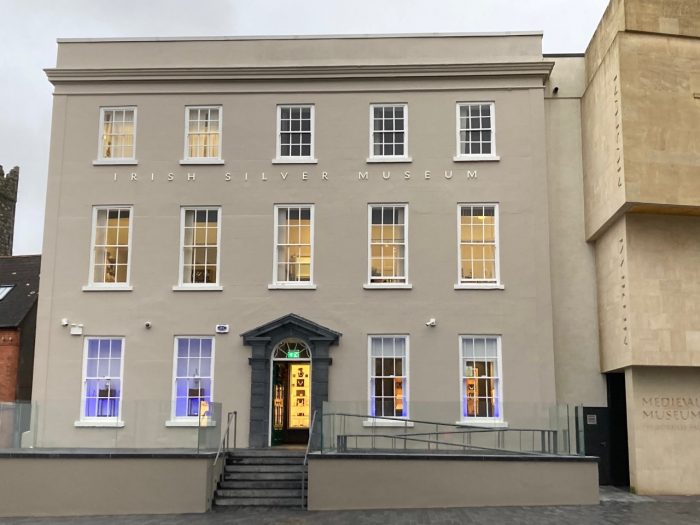 Edward IV’s sword, a gift to the Mayor of Waterford in 1462, along with two maces for the city’s loyalty to the crown – stands shining proud in the gallery. On official occasions it was carried in procession in front of the mayor. The sword symbolised the fact that the mayor’s authority within the city came directly from the king. Silversmith Thomas Bolton’s 1696 punch bowl – the earliest punchbowl in the world – glints at silver that once belonged to the famous satirist Jonathan Swift, along with pieces from the most famous houses and powerful families in Ireland’s history, as well as medals and commemorative pieces from the biggest military conflicts of our past.

The largest collection of eighteenth century emigrant silver is here reminding us that many Waterford families, such as Lawrence Carew in Seville, prospered abroad and sent home valuable silverware for use in Waterford churches. An ornate silver basket, the property of the sadistic Earl of Norbury (affectionately known as ‘the hanging judge’ for his love of gruesome punishments) sits sparkling in its case – an incongruent reminder of the notorious beak who was only too happy to condemn Robert Emmet to the gallows.

Silversmiths were never busier and always signed their pieces. Thomas Bolton, Nathaniel Horn, Cornelius Kirby, along with three generations of Flemings, were soon joined by Huguenot refugees that brought new innovations to their work. Rosemary tells me that quite a few of the silversmith’s widows joined the craft and she has identified no less than 13 female silversmiths. Why wouldn’t they be silversmiths? “After all,” laughs Rosemary, “they had picked up the craft when they worked side by side with their husbands.”

Pride of place surely goes to the Henry de Bromhead case that boasts the Cheltenham Gold Cup and the Aintree Grand National Trophy.

There’s a story to everything here. But the biggest story of all is that Waterford has opened two new museums at the height of a pandemic because imagination is the only weapon in the war against reality. Where else in Europe has this happened? It’s all part of the Waterford Museum of Treasures’ philosophy that we are a city that can’t stand still and that we must see the city in the future when we’re in a post-pandemic era. This is history as we live it.

“Next up,” declares a triumphant Rosemary, “will be the Museum of Death. We hope to open it in Cathedral Sq.”

This museum was made possible by the remarkable generosity of the Frisby family.

View from the Green Room: A romantic tragedy for all the ages