Kickstarting the summer with ‘Snowflake’ by Louise Nealon 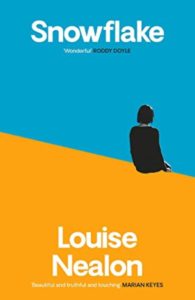 AT the tender age of eighteen, Debbie White has been accepted into Trinity College as an English undergraduate. To get there, she must leave behind her family’s dairy farm in the countryside, and join a world that sits in stark contrast to her own. She lives with her mother Maeve, and outside her uncle Billy sleeps in a caravan with his whiskey bottles and his endless stories of the stars. Inside the house, her mother tells stories of her own: these stories come from her dreams, which she believes to be prophecies of the future.

We rapidly learn that Billy keeps things together at the dairy farm, because Debbie’s mother sleeps more than she is awake. When she is awake, she is deemed unstable and as a mother, she fills that role quite poorly. It is Billy who ensures Debbie has money in her pockets each day for the commute to Trinity and it is Billy who binds them together as a family when the cracks start to come.

Debbie realises that she may have left the dairy farm behind but it follows her each day, ingrained in her very fingerprints. In a truly extraordinary manner, Louise Nealon takes each corner of Irish society and breathes life into it. Her control of dialect and casual tone is incredible, but it is her humour and wit which adds substance to a truly moving plot.

At its core, this is a novel about growing up, about grappling with ones identity and roots. Nealon recognised that sometimes we cloak that life, our history, with shadows before realising that those shadows follow everyone: we all have a history.

There is a beautifully delicate intimacy created in the carving of these characters, with a particular mention for Billy. He, Maeve and Debbie all try to shadow that which causes them the most pain, either through alcohol, sex, or self-harm. In the end, it is the acceptance that no matter how glossy the lives of others may look, everyone feels like an outsider, everyone craves the life that others live.

Snowflake is an extraordinary depiction of the beauty in our own uniqueness, of the importance of being flawed, and a reminder that sometimes those who live a seemingly perfect life are paddling under the surface furiously, just as we are.

When I finished this book, I paused and I absorbed, and I paused again, breathless with the enormity of what I had just read. I was briefly allowed as a voyeur through the window of someone else’s life and on return to my own, I was filled with a tender appreciation, not just for a solid, affirmational book, but for my own life, beautifully flawed.