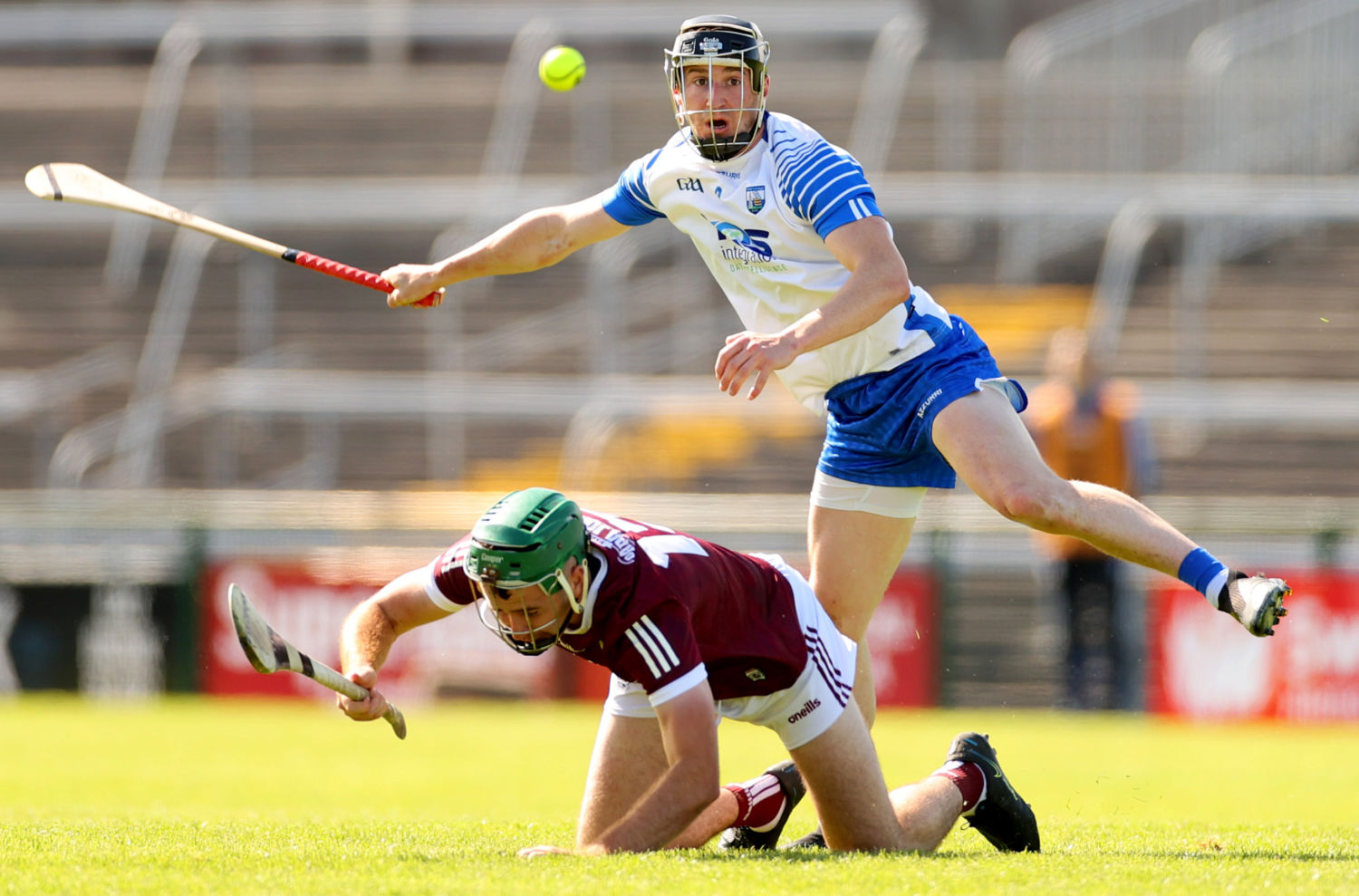 Galway’s Brian Concannon and Conor Gleeson of Waterford during their recent NHL clash in Salthill. Last weekend’s results have thrown up the possibility of a rematch in the next round of the qualifiers. All will be revealed on Monday morning. Photo: Inpho.

With no Waterford team involved on field and the early week heat wave easing off one felt comfortable and unapologetic about settling into the armchair to enjoy a weekend of sporting action on the box sufficient to sate the appetite of the most discerning sporting addict. And make no mistake about it, despite the spread across the channels of Golf, Wimbledon, Grand Prix Racing, Tour De France and Euro 2020, hurling provided the thrills, excitement and controversy to trump them all.

SKY’S HURLING JACKPOT
There is no question but that Sky Sports, for once, hit the jackpot on Saturday with three hurling championship games that kept hurling followers, fortunate enough to have the Sky Sports package, glued to their seats from early afternoon into the evening. Waterford followers had more than a passive interest in the games, particularly the Leinster semi-finals, for the losing teams in each case would be in the hat to face us as we seek to get back into the race for the Liam McCarthy Cup. If we did not already know it the road through the back door is going to be a very tricky one to travel with Wexford, Galway, Cork and now our conquerors Clare travelling the same route as well as the losers of next Saturday’s clash between Laois and Antrim. When the draw is made next Monday morning we will face Wexford, Galway or the winners of the Laois/Antrim game and we know what draw we will be hoping for.
Though, no doubt, watching the Leinster semi-finals closely, Liam Cahill would have had an equally strong interest in Sunday’s clash between Clare and Tipperary anxious to see if Clare could follow up their win over Waterford with an equally impressive performance against his native county. They did, only to fall foul of the new rule on cynical fouling applied in the most ridiculous manner imaginable to cost them the game. More on that later but on to the Leinster semi-finals and how the results might impact on Waterford.

ONE EYE ON LEINSTER
Galway went into their clash with Dublin as the warmest of favourites having ended their Allianz League campaign with high scoring wins over Waterford and Cork that secured a ridiculous share of the title with Kilkenny barring an expected meeting of both in the Leinster final. Dublin were going into this game on the back of a high scoring home win over a seemingly resurgent Antrim side and with nothing to lose they hit the ground running in Croke Park.
Galway seemed to think they could win this game at their leisure but before they knew it Dublin had taken a grip that was never going to be released. Dublin are not short on good hurlers and strong men and on a day when it all came together with such as Eoghan O’Donnell, Liam Rushe, Danny Sutcliffe, Donal Burke, Rian McBride and brilliant goalkeeper Alan Nolan came good Galway needed Joe Canning at this best but the free scoring talisman was missing for most of the game and early shots off target from frees and ‘65’s were an indication that this was not going to be his day. Indeed, there were comparisons to be made between Galway’s display and that of Waterford the previous week. Both teams will need to show a big improvement should they be drawn to meet in the qualifier next week. Given the recent league result between the teams in Galway Waterford, in form, need not be unduly worried while also having the better record against Galway in qualifiers down the years.
League form dictated that Kilkenny would start favourites against Wexford and while the result eventually panned out as expected this was a dramatic, incident packed game in every sense with the lead changing hands throughout. We had extra time and the first penalty and sin binning of the weekend, a dramatic finish to normal time that saw Wexford denied what would have been a victory without ‘Hawkeye’. Overall, Wexford appeared to be the better team in normal time but as we have seen so often in the past when push comes to shove Brian Cody produces off the bench the unsung heroes to turn the tide though on this occasion it was one of his former trusted warriors in the written off Walter Walsh who sealed the issue.

MUNSTER SEMIS
After the afternoon drama in Leinster the evening clash between Limerick and Cork had a lot to live up to. Clearly Cork went into this game fancying their chances against a Limerick side that had not exactly set things alight with indifferent displays in the league. For a time it looked like Cork would be in the game at least to the bitter end but when Patrick Horgan, of all people, failed to convert a controversial penalty award one sensed that Cork needed more things to go their way. The two Limerick goals, against the run of play, in time added at the end of the first half really decided the issue and left Cork playing catch up for the remainder of the game. It is the qualifiers now for Cork but there was much in their display to suggest that they van still have a big say in that grouping.
Sunday saw RTE getting in on the act with the screening of the Clare/Tipperary game and without question this clash provided the biggest talking point of an eventful weekend of sport. Clare were showing that their performance against Waterford was no ‘flash on the pan’ as they matched and for the most part had out hurled Tipperary up to the point minutes into the second half when James Owens’ interpretation of the ‘cynical foul/sin bin/penalty rule virtually awarded the game to Tipperary. Aidan McCarthy’s foul on Jake Morris a couple of yards in from the touchline was certainly deserving of a yellow card but occurring so far out from goal only God could determine if it was a goalscoring opportunity while certainly being a scoring opportunity. Morris might have been content to take his point with defenders racing to get between him and the goal. Owens thought otherwise and thereby hangs the tale. The referee compounded his error with an equally bizarre decision in the closing minutes of added time when he denied Aaron Shanagher what, in the normal course of events, was as clear cut a penalty as one ever see. Had it been awarded a d scored Clare would have been a point behind instead of four in those final seconds and who knows what might have happened.
For Clare, the bottom line is that for their win over Waterford they are now in the same position as their victims, possibly facing into a game with either Wexford or Galway in two weeks time. As for Waterford all eyes now will focus on the progress, or otherwise, being made by Jamie Barron and Conor Prunty over the next two weeks.
This is the official press release from Corke Park confirming how Monday’s draw will work.

All-Ireland SHC Rd 1 qualifier draw arrangements
The GAA has confirmed that the draw for the All-Ireland Senior Hurling Championship Round 1 Qualifiers will take place next Monday morning.
The draw will take place on RTÉ Radio 1 on Morning Ireland at 8.35am and will take the following format.
This round shall involve the Preliminary Round Winner (Antrim/Laois) and the defeated teams in the Leinster Semi-Finals (Galway & Wexford) as well as the defeated teams in the Munster Quarter-Final (Waterford) & Semi-Finals (Clare & Cork).
Rule: “The Preliminary Round Winner & one of the Leinster beaten semi-finalist shall be drawn against two Munster teams, which shall include the beaten quarter-finalist. The remaining two teams will get a bye to Round 2”.

4th Step- draw second fixture:
Repeat step 3 by drawing a team from Bowl 1 to play a team from Bowl 2.
The fixture dates, times and venues will be subsequently confirmed by a meeting of CCCC.