A SUMMER boat in Dunmore East was on the cards for Leslie Hughes and her family until her brother Trevor had a nightmare that one of them sleepwalked off the boat during the night, so the dream boat was hastily changed to the dream caravan. Once the school holidays were here, Leslie, her two older brothers Trevor and Andrew, her sister Jodi, and her Mam and Dad, the late Joe Cusack and Bernie ‘Barron’ Cusack loaded up the car and they were Dunmore East bound for the whole summer. The caravan was a magical place, almost from another time, with paraffin lamps and no electricity. It was the perfect setting for a coming-of-age story, as surrounded by the woods, the water and the wildlife, Leslie grew from a child revelling in the freedom of summer, to a teenager experiencing her first crush and her first kiss. 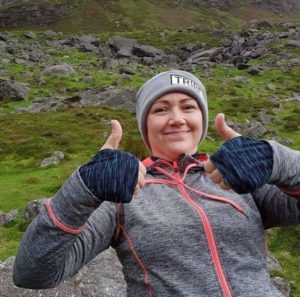 Once the summer was over, the journey back to Manor Lawn in Waterford city was made, and Leslie rejoined the Presentation primary school, followed by St. Paul’s Community College. Their home in Manor Lawn was a revolving door of guests as Joe and Bernie would never turn anyone away who needed somewhere to stay, their kindness and generosity was boundless. Amid the chaos was the sound of Trevor singing Cat Stephens to Leslie, cementing in place her life-long love of music.

The freedom offered by the long summer days in Dunmore East had set a high bar for an adventure-seeking Leslie and, in 1995, she hopped on the back of a motorbike with £200 in her pocket and a backpack on her back. For three weeks, she dated a boy from Wales and they lived in Machynlleth in Powys, Wales.

“Needless to say,” Leslie told me, “the relationship only lasted three weeks but after couch surfing for a few weeks, I moved in with my new friends Joni and Justin and started working in Laura Ashley’s as a seamstress. I stayed in Wales for a further year and a half.”

In hindsight, Leslie realises looking back that she was looking for an escape, a move mirrored by her mother Bernie who left in her late teens to travel to Boston, on foot of a rumour that her then boyfriend was preparing to propose marriage to her. It was a fortuitous move because when Bernie returned home, she met Joe and they were married. Equally fortuitous was Leslie’s move because when she returned home to Ireland, she met Jason, who is now her husband.

Proving that the bonds tying us to home are powerful, Leslie moved in five minutes away from her childhood home in Manor Lawn. Along with firefighter and musician husband, Jason, Leslie’s family includes her 20-year-old daughter Freya, her son Noah (9) and Adam (7). 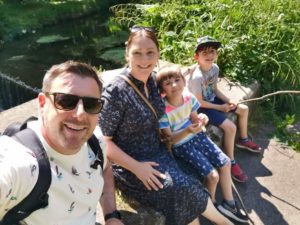 “Our house is full of big personalities with three of us being neurodivergent. It’s always noisy, sometimes messy but packed full of love with no dull moments. Sometimes it’s hectic and like all families it can be tough, but would we change anything? Well, other than the noise level… no,” she laughed.

Being neurodivergent means that sometimes Leslie needs to take out her lists, re-group and give herself time to avoid becoming too overwhelmed. This feeling began to emerge when she was a pre-teen and she remembers a predominant feeling of being the odd one out. Being unsure about where she belonged, she worked hard to blend in with different groups of people and she ignored the nagging feeling inside that something wasn’t ok. That something was undiagnosed ADHD, which as an adult makes sense to her, but as a teenager, it deeply affected her mental health.

Leslie said, “There was an unhealthy relationship with alcohol with people around me and this too became my crutch, but I kept searching for the right place. I was in a very vulnerable state, but no one could see it, until the wrong people did and took advantage of it in the worst way for a vulnerable mixed up 15-year-old girl. A series of unfortunate events that followed led to self-medicating and extreme self-loathing, reaching out of control status towards the end of my time in Wales.”

To this day, Leslie believes that her decision to come home from Wales was what saved her.

In recent years, a chance encounter triggered a series of painful memories for Leslie, particularly memories and blurred lines from her teenage years when she was a victim of grooming, and she began to undergo Talk Therapy.

“A work colleague mentioned an incidence when a much older man propositioned her and tried to pursue a relationship with her. I had recently begun working with survivors of sexual abuse and we were discussing that he was clearly grooming her and if he had had a sexual encounter with her then that would have been rape. Luckily for her he had not, but the conversation ripped open a wound in me that I had never tried to heal if I’m honest, I had never truly stopped blaming myself and was consumed with shame over it all. Over the coming weeks I began specialised rape crisis therapy and slowly began healing. I started talking about my experience with others and little by little realised that I had been conditioned into thinking that it was my fault, society had a major part in that.”

Today, Leslie is the driving force behind Laochas, the Warrior Soul Project.

Speaking about her decision to set up Laochas, Leslie said, “I was so tired of children and young people suffering and had just heard another story about a teen who attempted suicide whilst sitting on a waiting list for months to get the support he needed. I had always wanted to do something to help young people who struggled the way I did, I wanted to be the person that I needed, someone who heard me, saw what I needed and just helped.”

In Waterford, she is sparking the conversations that need to happen around mental health in young people, using her experiences to change the narrative for other young people.