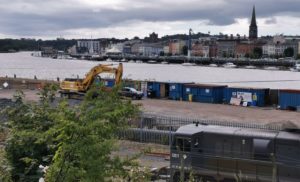 WHAT now for both the North Quays and Michael Street? This is a question which has been fielded more than once since the North Quays news that none of us wanted to hear broke several weeks ago.

That the City & County Council has separated both sites in terms of their future developments represents a common sense move by City Hall, with the SDZ likely to take priority given its URDF-monied backing.

As we went to press week, we’ve learned that the Council that it has not received “any specific expressions of interest in relation to Michael Street”.

This, while not surprising in the context of the recent news relevant to both the Council and Falcon Real Estate Ireland Ltd, is hardly insignificant either.

However, immediate eyes at Executive level appear to be trained on the North Quays, given the pending – or not so pending – appointment of a commercial advisor, with the tendering document for such a post unlikely to be ready until September.

Could this be expedited at greater pace by the Council, or would the Executive leave itself open for wider criticism by rushing such an appointment during the height of the administrative holiday season?

What’s vital is that a suitably qualified person with a proven track record and specific expertise is put in place to steer this project back on course.

In the meantime, the North Quays and Michael Street await the arrival of a white knight – or two. The clock is well and truly ticking.

SO football didn’t ‘come home’ at Wembley Stadium on Sunday night, no doubt to the immense disappointment of English fans living here in Waterford.

But for those native Italian fans on Suirside, to see their beloved Azzurri seize a first European Championship since 1968, having failed to even qualify for the 2018 World Cup, their joy must be unquantifiable.

To those who don’t understand why so many of us get so enthused by 22 players chasing a ball around a field, no doubt there are passions in your lives which many football fans equally cannot tap into.

Football – as is the case with so many sports – represents a link to childhood, an adrenaline surge which extricates us from a reality which, over the past 16 months, has proven decidedly grim.

The great regret from an Irish perspective is that our team was not part of this 24-nation festival. However, was missing out on England v Germany in Dublin too great a loss in the context of what we saw on the streets of London last Sunday?

One of the great eternals of football comes in the hope of what lies ahead. So let’s hope that better days lie ahead for Stephen Kenny’s Boys in Green. But for now, Bravo Italia!