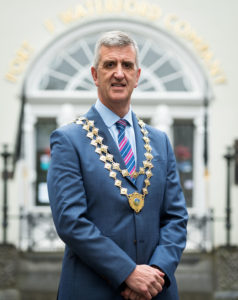 This pearl of wisdom was mined from my Wooden archive – a priceless pocketbook given to me by a friend several years ago – following my recent chat with new Waterford Chamber President John McSweeney.

The Mallow native, who moved to Waterford through work with AIB 25 years ago, had just bought us both coffees when he made a few observations, the type that only tend to be made if you’re actively and enthusiastically engaged by our city.

Directing my eyes to both ground and first/second floor levels on both Broad Street and Little Patrick Street, John pointed out how a few straightforward tidying jobs could elevate a streetscape.

“And it’s great to see this (pointing at the Wetherspoon’s site) finally going ahead,” he said. “That ought to bring a level of energy along here that we haven’t really seen since Egan’s was open down the street. The more reasons people have for not only coming into the city but spending more time in the city centre and supporting businesses here, the better. Patrick Street has had a fantastic revival, something that’s pretty much gone under the radar when you consider how lively it is now and it’s important that we don’t lose sight of progress like that.”

Recalling his initial days in Waterford back in October 1996, John’s grasp of detail again caught my ear.

“I stayed one night over in the Ard Rí Hotel and I remember thinking I was too far away from what was happening in the city so I moved over to the Tower Hotel, stayed there for three months and it was just fantastic! Nearly every Christmas party in the city was held there at the time and from a social perspective, it was such a brilliant way of really getting to know Waterford.”

Transferred from AIB’s Listowel branch, where he had worked since 1987, his Finance & Leasing career with the bank began once he reached Suirside.

“I didn’t know where I was going to at the time and my only knowledge of Waterford prior to that was through playing rugby with Tralee; the daunting thing we used to face into every season was wondering if we’d have an away match in Waterford to face into! But I’ve been living here in Waterford ever since that big move and I’ve worked in a few different departments (for AIB). I’d four years in New Ross (2013-17) as Branch Manager but I’ve been back working here since then.”

“Waterford has been great for both me and my family.”

He added: “Noelle (his wife) and I have three children, Niall is 20, Eoin is 17 and Avril is 16 and they’re steeped in Ballygunner (Hurling), Gaultier (Football and Camogie) and the Villa (Soccer) Club – I was involved with Ballygunner as a coach for a number of years as well. Waterford has been great to my family, it’s been great to me and it’s moulded my kids – Waterford was me, is me and will be for the future.”

Having initially trained as an apprentice fitter at the Mallow Sugar Factory (Mallow’s version of ‘The Glass’) John caught wind of an AIB recruitment drive which ultimately took him to Listowel.

“When you joined the bank during the mid-80s, you really didn’t know where you’d end up going at the time but over the years that has changed quite a bit taking the job of one’s partner into account, which of course didn’t apply from a historic perspective. Noelle’s own father had also worked in the bank and her family moved quite a few times in the late 70s/early 80s. But of course, remote working has taken on a whole new level of significance since March of last year so things have changed a great deal since those early years.”

Inter-regional sporting events via the bank meant John already knew some of his Waterford colleagues prior to making the move, “and that really allowed me to hit the ground running here”.

Work during the boom years was “incredibly busy” for John, taking him to Dungarvan and Kilmacthomas while availing of a car phone which would now be considered an antique. 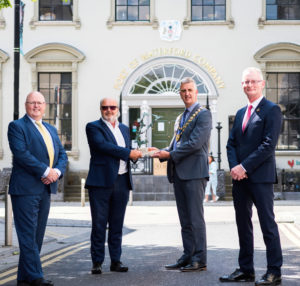 “I had to turn the phone off before I’d get to Kilmac because there was no coverage and you’d turn it back on then on the way out; the phone unit was built into the car so you had to manage it as best you could. It’s a far cry from where we’re at now!”

Having bought a home in Waterford in 1996 and marrying Noelle (who also works for AIB) the following year, the city was truly established as home by then. That John gravitated towards sporting and Chamber-related activities felt like a natural step to take as his Déise roots grew deeper.

“The coaching gives you a greater sense of involvement and it was a great experience to watch the players develop both as players and friends; I got a great buzz out of that. And then, in terms of work, becoming engaged with Waterford Chamber is something I’ve taken a great deal of satisfaction from.”

John continued: “Look, of course the recent news regarding the North Quays was naturally disappointing but difficulties present opportunities. If new businesses are going to integrate into the city, you want them to fit in well. We’ve a fantastic waterfront site in play where we can have hotel, tourism and third-level education footprints so we need to keep thinking big. What will eventually be in place there can’t compete with what’s already on this side of the river. We need both sides of the Suir to complement each other – but we have to retain the soul of the city in terms of retail. And that remains achievable.” One could even say it’s all in the details.

No doubt, a busy year lies ahead for both John and the Chamber. Let’s hope it’s a good one…