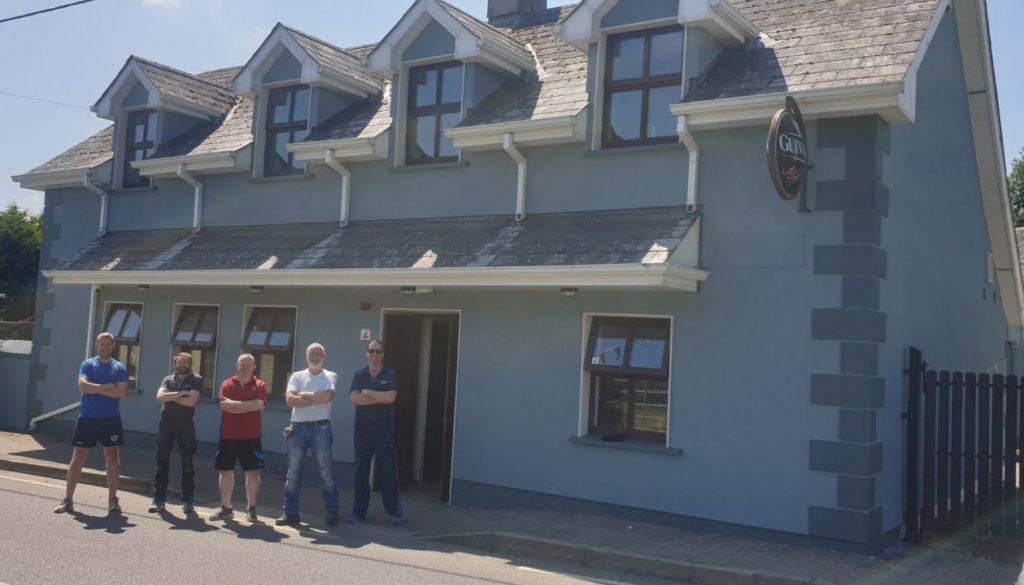 Members of the 19-strong group who have bought the public house in Rathgormack run by Maudie Kennedy for over 50 years; from left: Stephen Flynn, Ryan Roche, Tom Drohan, Mick Morris and John Murray.

NINETEEN locals have come together to ensure the re-opening of one of mid-Waterford’s best-known public houses, with the ceremonial tape due to be cut on Friday, July 30.

What’s been known for living memory as ‘Maudie’s’, run for over 50 years by Maudie Kennedy, will be replaced by ‘The Village’, a huge boost for an area which, as recently as 2013, had two pubs.

Each member of the group has pitched in €12,000 to ensure there’ll still be pints served in the shadow of the Comeraghs, a story which has captured widespread newspaper and radio attention throughout the past week.

Among the investors is Mick O’Hara, who told the Waterford News & Star that this novel, community-boosting deal has been “well over a year” in the making.

“I was out in Switzerland when I got a ring about it from one of the lads back home – I think it was just before the pubs closed for the first lockdown – and there was word going around that Maudie was going to be selling up,” he said.

“Now it was word of mouth stuff at the time, there was nothing 100 per cent known when the talk of it began. But it had all come from a pretty reliable source. Maudie had been behind the bar since her late teens – you’re talking over 50 years – so I don’t think anyone would have begrudged Maudie reaching that decision. That’s a long time to put down in any job.”

So once the news was verified, and with speculation that someone in Dublin was considering a bid for the property as opposed to the pub, Mick and a host of locals, including Councillor Seanie Power (FG) and Stephen Flynn, got serious.

“It would have made a fine big house and there’s plenty of room upstairs to do something with it, so if the pub had gone, there’d never again have been another pub in Rathgormack. The footballers are going well (with their rescheduled 2020 Senior Football Final with Ballinacourty yet to be played) and the hurlers below in Clonea are pretty strong at the moment, especially for older people in the parish, if you’d no pub, then there’s nowhere to meet after a game for a couple of pints. And if that was gone, sure where would they go? It would have been like cutting a limb off in the community – and if the pub licence had gone from Rathgormack, we might never have got one back again.” 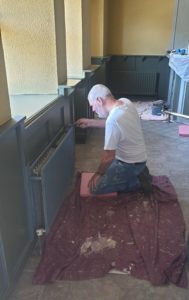 Work on the pub’s refurbishment is ongoing ahead of its re-opening on Friday, July 30.

And so the 19-strong consortium, headed by Directors Stephen Flynn, Jim Harrison and Gerard Kirwan, and featuring Ryan Roche – a nephew of Maudie Kennedy’s – set about bringing their pub/café project into reality.

Said Mick O’Hara: “The building and the licence has now all been bought together and it’s been a huge team effort when you take everyone involved into account. A lot of the lads involved were regular drinkers in the village over the years – even when the place was quiet on a Saturday or Sunday evening, there’d always be the reliable few in there for a pint and a chat. Maudie’s would have been the only pub they’d actually have had a drink in, so this really felt like something worth getting involved in. The building itself is in great order so all we’re doing now is putting our own touches on it, painting the exterior and so on.”

He added: “If you’d ever gone in the front of the pub, you’d have seen the mould on the wall there in the shape of the pub – and when it came down off the wall it really did feel like the end of an era – but we’re giving that back to Maudie. The bar is being re-sprayed, there’ll be new shelving and seating going in. There’ll be a bit of sound-proofing going in where Richie (Kennedy) had the gym upstairs, new lighting and so on, just to put our own touches on it. We’ve nothing in mind for upstairs right now but in time it’d be great to serve meals up there. We’ll have a coffee station downstairs and just as Maudie’s was, it’ll be open seven days a week.”

Mick himself needed little convincing to get involved in the new venture, which is scheduled to open on Friday, July 30.

“To have a pub back in the village is fantastic and the reaction in the last few days has been unreal; it’s nice to be reversing a trend because once pubs tend to close – like Ned’s up the road here in 2013 – you don’t tend to get them back.”

He added with a grin: “And sure another reason for getting involved in the pub is that I can’t get barred now! Ah, look, being serious, re-opening the pub is great for the village and the wider area and I’m just delighted to be involved.”