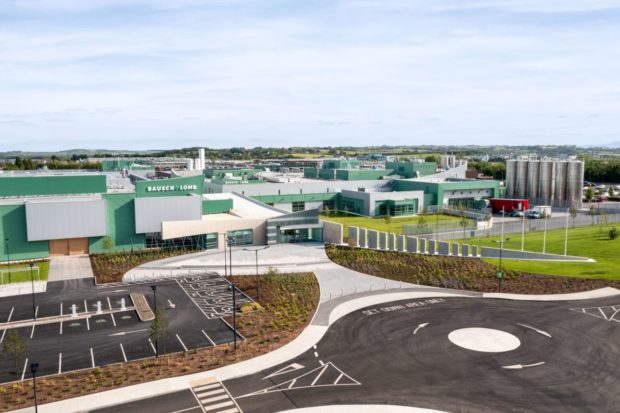 The new expansion at Bausch + Lomb

BAUSCH + Lomb, one of the world’s leading global eye health company, today announced plans to invest €90m to expand its manufacturing operations at its Waterford facility.

The investment is expected to generate 130 additional jobs when production commences in 2023 and will provide the Waterford facility with additional capacity to meet expected demand for its Biotrue ONEday® range of contact lenses.  In addition, approximately 150 additional workers are expected to be employed in the construction phase of the expansion.

The investment will further strengthen the Waterford plant’s position in supporting Bausch + Lomb’s efforts to increase market share in the contact lens market and it follows a similar announcement in November 2018 in which the company announced it was investing to increase contact lens manufacturing capacity at its sites in Waterford and Rochester, N.Y. by adding multiple production lines at these two sites to support the manufacture of its innovative daily disposable silicone hydrogel (SiHy daily) contact lenses.

Construction of the Waterford facility, announced in 2018, has now been completed, and production of the company’s latest contact lenses, Bausch + Lomb INFUSE®, will start by the end of this year.  The Waterford site currently employs more than 1,500 people.

Tánaiste and Minister for Enterprise, Trade and Employment Leo Varadkar, welcomed the news this morning.

“Bausch + Lomb has already invested significantly in the South East region, employing over 1,500. and this decision reaffirms that commitment and is a great vote of confidence in Waterford and all it has to offer,” Minister Varadkar said. “I wish all involved the very best with this new development and thank Bausch + Lomb for the continuing commitment to Ireland.”

Mark Hennessy, Site Lead, Bausch + Lomb, Waterford, said: “Our Vision is to be the Global Leader in Contact Lens Innovation and Manufacturing, and this latest investment will enable the Waterford facility to meet the growing demand for our very successful Biotrue ONEday® range of daily disposable contact lenses. The Biotrue lens was developed by the team in Waterford and supported by our commercial colleagues around the world, and it continues to grow in our U.S., European and Asian markets.

“We recently celebrated the 40th anniversary of the establishment of Bausch + Lomb Waterford, and the decision to make this significant investment in Waterford was influenced by our track record in providing high-quality products and excellent customer service to markets around the globe.”

“During my term as Mayor of Waterford City and County I had the pleasure of meeting Angelo Conti and senior management at Bausch and Lomb where we discussed the company’s plans for expansion in Waterford,” Senator Cummins said. “As one of the main-stays of the economy of the city for the past 40 years, Bausch and Lomb continues to play a major role in our community. During its long and successful history in the city, it has always been at the forefront of innovation and I wish all those involved in the development of the facility in the time ahead every success and thank them for their commitment to the city and region”

“IDA Ireland has partnered with Bausch + Lomb for many years. We are delighted with the company’s decision to further expand its manufacturing operations at the Waterford facility, creating 130 jobs. It demonstrates Bausch + Lomb’s continued commitment to the South East region, in which, this year, it celebrates its 40th anniversary.  This expansion is a welcome addition to the South East Region’s thriving MedTech cluster.  I want to wish Bausch + Lomb every success with this expansion and assure it of IDA Ireland’s continued support.”

Recruitment for the new jobs will begin in 2022. However, the facility currently has vacant positions in operations, engineering, quality and other disciplines.