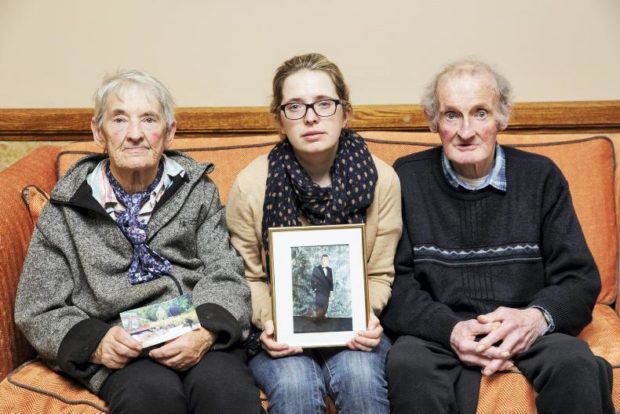 The family of the late Thomas Power who died in 2017. A National Cardiac Review was announced in response to his death in the back of an ambulance.

IN June 2017, then Minister for Health Simon Harris announced a National review of Cardiac Services in Ireland following the death of Waterford man Thomas Power in the back of an ambulance on the way to Cork University Hospital. Mr Power couldn’t be treated in University Hospital Waterford due to its lack of 24/7 cardiac care. Following ongoing campaigns in Waterford for this service to be installed, Minister Harris announced that no further cardiac services would be approved in Ireland until the National Cardiac Review was published. Later that same month, a tender was issued for a new Cath lab at St. Vincent’s Hospital Dublin.

The Waterford News & Star has consistently requested an update on this cardiac review. In 2019, when the review was supposed to be published we contacted the Department of Health who issued the following response:

Much of the work of the National Review has been completed in relation to informing the optimal configuration of adult cardiac services, some significant and important work remains outstanding. In order to allow this work to be completed, the work of the Steering Group has been continuing through the summer months.  The Steering Group hopes that it will be in a position to confirm a completion date in September 2019.In December 2020, Sinn Fein’s Louise O’Reilly asked the same question during a Dail Debate on the HSE. This was the answer she was given by current Minister for Health Stephen Donnelly:

The National Review of Specialist Cardiac Services commenced in January 2018 under the Chairmanship of Professor Phillip Nolan and a Steering Group was formed from nominations from interested stakeholders representing medical, professional/technical staff, nursing and patient representatives.

The aim of this Review is to achieve optimal patient outcomes at population level with particular emphasis on the safety, quality and sustainability of the services that patients receive by establishing the need for an optimal configuration of a national adult cardiac service.

While substantial progress has been made on the Review, the COVID-19 Pandemic has impacted on the progress of the review, as the Chair has played a key role in the national COVID-19 response, both as a member of the NPHET and Chair of the Irish Epidemiological Modelling Advisory Group. Work is now underway to progress the Review to completion over the coming months.

Approval for the second Cath lab at University Hospital Waterford was given in 2018, before the National Cardiac Review was announced. However 24/7 cardiac care at the hospital will require further investment – investment which will will presumably be at the whim of the National Cardiac Review. Sadly, the term “coming months” can be equated to “how long is a piece of string”.