Obituary: The life of Pattie Cummins was blessed with kindness 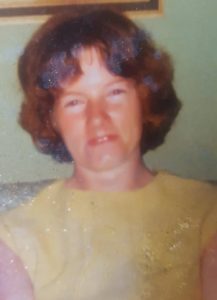 Patricia ‘Pattie’ Cummins of 216 William Street, Portlaw, who died on July 12. (With thanks to Suzanne Ross)

PATRICIA CUMMINS, better known in her native Portlaw as ‘Pattie’, was laid to rest in the family plot overlooking the Tannery Town on Thursday morning last.

Pattie, who died on Monday, July 12, lived a life which exemplified that long after a village raises a child, generations of neighbours and acquaintances can also support and sustain one of their own.

And, as Parish Priest Richard O’Halloran noted in his poignant sermon at Saint Patrick’s Church, “even though she hasn’t been living among us for a little while now, her death still brings with it a great sadness but as we gather, we do as a thankful family. We do so as a thankful community, celebrating and remembering one of our own.”

Fr O’Halloran described Pattie as a very quiet but well-known member of the Portlaw community. “She was very private and content in her home, always caring and loving, especially to her pet cats and was delighted whenever an expected caller did call and she was always very appreciative of all that was done for her by so many.”

He continued: “Pattie was very lucky to be surrounded always with people who watched out for her, cared for and made sure that she always what she needed. Relatives, very kind neighbours, carers – many people who kept an eye and responded whenever she needed anything. And in her own way, even though she could be very persistent, Pattie was always grateful for everything that was done for her and everyone who came to her help.”

Pattie was the youngest of three children, the only daughter to Tommy and Bridget Cummins of William Street, Portlaw and sister to Seamus and Noel. Like so many of her generation in Portlaw, Pattie first found employment in the Tannery, a short walk from home, where she worked in the warehouse.

But, as Fr O’Halloran noted, after a few years “and with a great zest for life and a great vibrancy, she bravely dreamt and fulfilled a wish to travel to America; she went from the intimacy and the security of a small town to the vastness and anonymity of the States and that must have been a grand adventure but by all accounts, it was an adventure that she enjoyed immensely”.

Having spent several years in the United States, Pattie returned home to care for her mother who had taken ill before travelling to Dublin to work in hospitality.

“But a return home to Portlaw was always on the cards, and return home she did,” said Fr O’Halloran, “both to look after her father and to settle down once and for all. And in those early years back home, as many of you will know, Pattie was a very recognisable person. She was often admired for her stunning looks; she seemed always to be on a mission to go and do something and was unmistakeable as she travelled through Portlaw on her scooter”.

Back on home soil, Pattie’s interests remained plentiful, Fr O’Halloran noted. “She was a keen banjo player in her day, loving her music and was always game for a laugh. She liked to socialise and spent many nights dancing to a band called The Cowboys in the Premier Hall, owned at that time by her Aunt and Uncle, Teresa and John Walsh. But apart from enjoying the music there or attending the pictures that were also put on there, Pattie would have been remembered as working in the shop that belonged to the hall. She was also in arts and crafts and she especially liked to sow.” 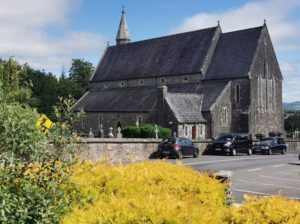 St Patrick’s Church in Portlaw, where the Requiem Mass of Pattie Cummins was celebrated on Thursday, July 15.

In later life, Pattie’s closest companions were her pet cats, whom she doted on. “They received the best of care and attention from her,” said Fr O’Halloran. “And I can also say that they always got a good Christian burial as well. I know on many occasions, Father Mick (O’Byrne, the former Parish Priest) was often called in and gathered with the neighbours and prayers had to be said for any pet cat that was after dying… and she was always thankful for the few prayers and for the sympathy of neighbours.”

Pattie didn’t take the word ‘no’ easily as an answer, Fr O’Halloran told mourners. “She was very persistent and always knew what she wanted. Her phone, I think, was always on the go, and I don’t think anyone got one phone call if they were to get 20. But she always knew what she wanted and she was very grateful when she did get it. But no-one, we can safely say, ever left her down and no matter whom she spoke to, they always responded as quickly as they could. Pattie is going to be missed; she is another well-known person, another character taking their leave from us here in Portlaw and something of old Portlaw is gone with her. But like the others gone before her, Pattie leaves many memories and stories that will now be retold many times in the years to come. We were blessed together to have known her… and she will not be forgotten.”

Pattie Cummins, predeceased by parents Tommy and Bridget and brother Seamus, is survived by brother Noel, her extended family and the Portlaw community whose many kindnesses towards her underlined how tightly knit and loving a neighbourhood can be. Rest easy now, Pattie.