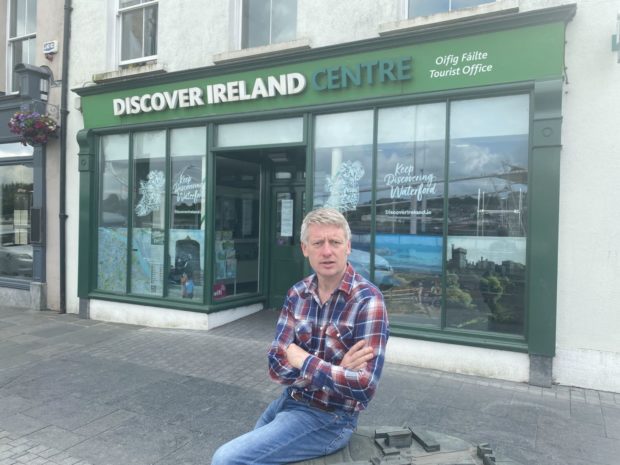 WHILE many of Fáilte Ireland’s Tourist Information Centres reopened on June 2, the office of Ireland’s oldest city remains closed and the reason will be a bitter pill to swallow for Déise folk. In a response to a question by Fianna Fáil Councillor Jason Murphy through Minister Mary Butler’s office, a Fáilte Ireland spokesperson said that the decision to open 10 tourist information offices across Ireland – including Kilkenny – but not Waterford was based on “low projected footfall”.

The news that Waterford’s tourism footfall is not good enough for Fáilte Ireland, and that every other city and a host of other counties have had their information centres opened, has enraged Cllr Murphy.

“The fact that the Waterford Bord Fáilte information centre is one of the only Bord Fáilte offices to still remain closed is nothing short of contemptible,” Cllr Murphy said. “To have Ireland’s oldest city treated in such a disgraceful manner calls into question Bord Fáilte’s commitment to the Ancient East brand and is frankly a direct insult to Waterford’s tourist offering. Many small hotels, guest houses and tourism providers rely on this office to attract business and awareness and one would have to question what the reaction would be if a similar policy was to pertain to Killarney, Cork, Galway or any stop along the precious Wild Atlantic Way.”

Cllr Murphy said that this was a “slap in the face”.

“There are hundreds of stakeholders that have done so much to make Waterford an outstanding quality tourist destination and they’ve been slapped in the face by Fáilte Ireland,” Cllr Murphy said. “I will be doing all in my power to ensure that the office is reopened as soon as possible.”

The tourist office in Kilkenny recently moved further away from their premier attraction, Kilkenny Castle, to be closer to the incomplete brewery quarter development. It’s now just a stone’s throw from the Smithwick’s brewery, which recently announced that it is closing permanently. Meanwhile, the closed tourist office in Waterford City is just around the corner from two brand new museums. This, and the fact that the Sligo and Monaghan tourist offices are currently open, will surely put pressure on Fáilte Ireland’s views on Ireland’s oldest city.

The Waterford News & Star tried multiple times to contact Fáilte Ireland for comment but none was received at the time of going to print.