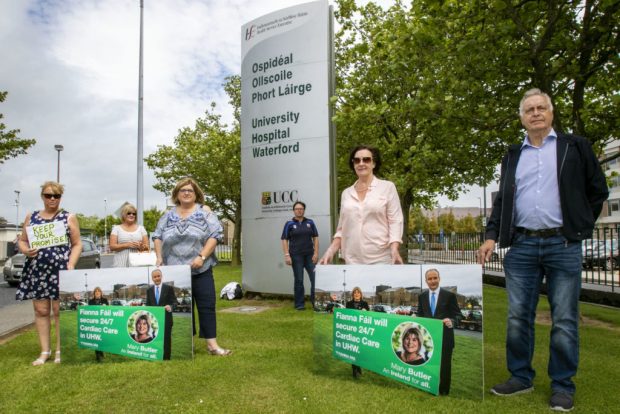 IT’S still not known whether the new cath lab, which is currently being constructed over the existing lab at University Hospital Waterford, will be able to carry out emergency cardiac procedures. Since the tender was awarded for the second lab, the Department of Health has consistently said that the second lab would “operate five days a week and provide diagnostic services only”

However, in February of this year, Fine Gael Senator John Cummins received confirmation from the South South West Hospital Group CEO Gerry O’Dwyer that the new lab will have the “same equipment recently installed in the newly upgraded existing Cath Lab and will have full interventional capabilities”.

As far as many were concerned, that was the end of the matter and, thankfully, the new lab would be able to provide interventional support for cardiac emergences. However, as recently as July 16 the Minster for Health, Stephen Donnelly is still saying that the second lab will provide “diagnostic services only”.

The letter, which was sent to Hilary O’Neill of the South East Patients Advocacy Group, stated the following: “As set out in the HSE’s options appraisal, the preferred option is for a second Cath lab and associated 12 bed day ward (delivering six additional beds) on the roof of the existing Cardiology Department, which will operate five days per week and provide diagnostic services only.”

Speaking to the Waterford News & Star this morning, Ms O’Neill said “This again is confirmation from the Minister for Health that the second cath lab will NOT be providing interventional cardiology services, despite promises and assurances from the SSWHG and a number of politicians, both locally and nationally, that it will do so.”

Ms O’Neill also reacted to news that the National Cardiac Review is still no completed, almost three years after it commenced.

“The National Review is still not completed and patient outcomes are being badly affected and lives are being lost as a result because 24/7 PPCI is an absolute necessity for the people of the southeast!” Ms O Neill said. “This need is also supported by a dramatic increase in the population of the region at a rapid rate in the last year and a half due to covid with so many people now working from home as people are relocating to the southeast from Dublin and other large urban areas.We are again calling on government, especially Micheal Martin and Mary Butler to fulfil their promise to us to implement a 24/7 PPCI service at UHW without any more delay and to begin the recruitment process to staff the second cath lab.”

The Waterford News & Star has contacted the Department of Health for comment.