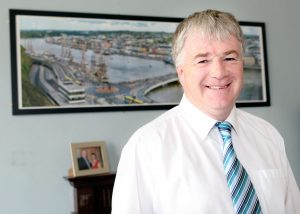 Despite the rumours and the concerns to the contrary, Waterford City & County Council Chief Executive Michael Walsh believes that there will be development on the North Quays in the not too distant future. He spoke to DARREN SKELTON this week about the work they’re doing now, and the new timelines for another new North Quays plan.

D.S. What has the Council been doing since the relationship with Falcon Real Estate Development broke down in May?

M.W. We’ve been doing background work to put together a proposition that we hope the market will bite. We’ve been consulting with a lot of people and have been contacted by a lot of developers who have expressed an interest in the site. First things first, we have to establish whether or not they’re ‘tyre-kickers’.

D.S. That sounds like it will take time. Will it affect any SDZ or funding deadline?

M.W. Firstly, I wouldn’t agree with the suggestion that the Government funding is under any threat. We’re in the middle of a process and we’ve already drawn down a significant amount. I’d be absolutely satisfied that there is no risk to that funding. Admittedly, there is one final hoop to go through for the largest element of the funding, which requires a further cabinet decision but I’m not seeing anywhere in the political environment, any threat to that funding. Because the funding will go over €100m, there will be a requirement for further cabinet approval but we’re not worried about that. It’s a normal process for public expenditure.

D.S. We have funding and plans for a pedestrian bridge, but no idea as of yet what the bridge will bring people to. We surely can’t build a bridge to nowhere?

M.W. What I can guarantee you with certainty is that there will be development on the North Quays. What I’m not certain about is the quantum of that development. In terms of the bridge and the other infrastructure, there’s no uncertainty. Other elements of the development are less certain, due to factors such as Covid and the retail industry. We’re doing a commercial analysis to figure out our best possible plan to bring to the market. We want it to be game-changing insofar as it’s a quantum of development that marks it as a destination in its own right and as an extension of the city centre. That’s always been our objective. We’re engaging with national players to figure out, commercially, what will work on the North Quays.

D.S. Was the Al Hokair/Falcon plan ever a realistic proposition?

M.W. That plan may have been too ambitious but as time went on, and the landscape changed, it certainly became too ambitious. We’re now seeking to reconfigure it, value engineering it, looking at every element to decide what the incomes can pay for at the other side of things. That’s with a view to have a very clear position in September of this year.

D.S. What do you say to the people who believe that the time to build the North Quays was five years ago and that it’s almost impossible to build this ‘game changer’ now with Covid, and the price of construction shooting up?

M.W. There will be a pedestrian bridge and development on the North Quays, in due process, over the next year or two. I’m not here to worry about what people say about this development, I’m here to make it happen. The simple reality is that we’re working very hard to make this happen. If Al Hokair never came along like they did, with the ambition that they had, we would have had development on the North Quays by now. Construction inflation is running at about 5% per year, but some of the other metrics, such as rentals and house prices are positive.

D.S. How do you make sure that you don’t make the same mistake again?

M.W. By getting a developer that is committed to the development and has the capacity to make it happen. To be fair to Falcon though, circumstances went against them such as Covid and the changes in the retail sector. If the development had momentum and we received the URDF maybe a year or year and a half earlier then I think we would have seen development by Falcon on site. That’s how close we came. This time around, it’s a slightly different proposition although we’re still looking for a mixed use site with housing, office, hospitality and some retail. We’re looking at all the possible investor/ developer options right now in order to make that happen.

D.S. Are Falcon still in the picture?

M.W. No. We have ended our relationship with Falcon.

D.S. So what of the Pedestrian Bridge? In a number of months, that will be ready for construction, possibly before you have a new developer/s for the North Quays. Will it be built anyway?

M.W. We expect to be going to tender on the bridge in October. There will be a four-five month period for assessment etc before the contractor will be appointed. We will have a choice to make at that point whether we push the button or otherwise. We would be confident that at that time, we will be in a positive place with regards to a development but in the worst case scenario the bridge can be brought over the North Quays on to the Dock Road to complete the Greenway to New Ross. It won’t change the design of the bridge, it will just add another bit at the end. But, that really is the absolute doomsday scenario. We have a lot of things in our favour now, we have cleaned up the site, we’ve assembled all the land, we’ll have the infrastructure that will help to facilitate it, we have planning permission, an SDZ and absolutely no environmental issues. The reality is that we’re in a good place but probably back to where we were a year or a year and a half ago.