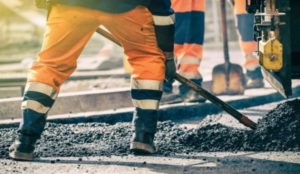 THERE will be a ‘significant closure’ of the N72 in West Waterford during August as road crews complete extensive resurfacing works along the route.

Addressing Councillors during the July meeting of the Dungarvan/Lismore District, Senior Engineer Gabriel Hynes said there will be a “two-to-three-week closure in August to facilitate the final laying of the HRA (Hot Rolled Asphalt)”.

Mr Hynes continued: “So we will have significant diversions there and we will be putting up a public notice in the coming weeks to get submissions and to advise the public. But there will be diversions back out the Clonmel Road to come back in by Millstreet in one direction. The diversions coming from Cappoquin will be turning off at Rockfield Cross – at Whitechurch – along the Bog Road for cars. The diversion will be along the regional road at Clashmore and on the N25 for HGVs.”

There have been significant delays between Affane and Lismore in recent weeks as the works continue, although motorists have been bypassing the stop-go systems from Lismore to and from Dungarvan by driving through Ballinameela.