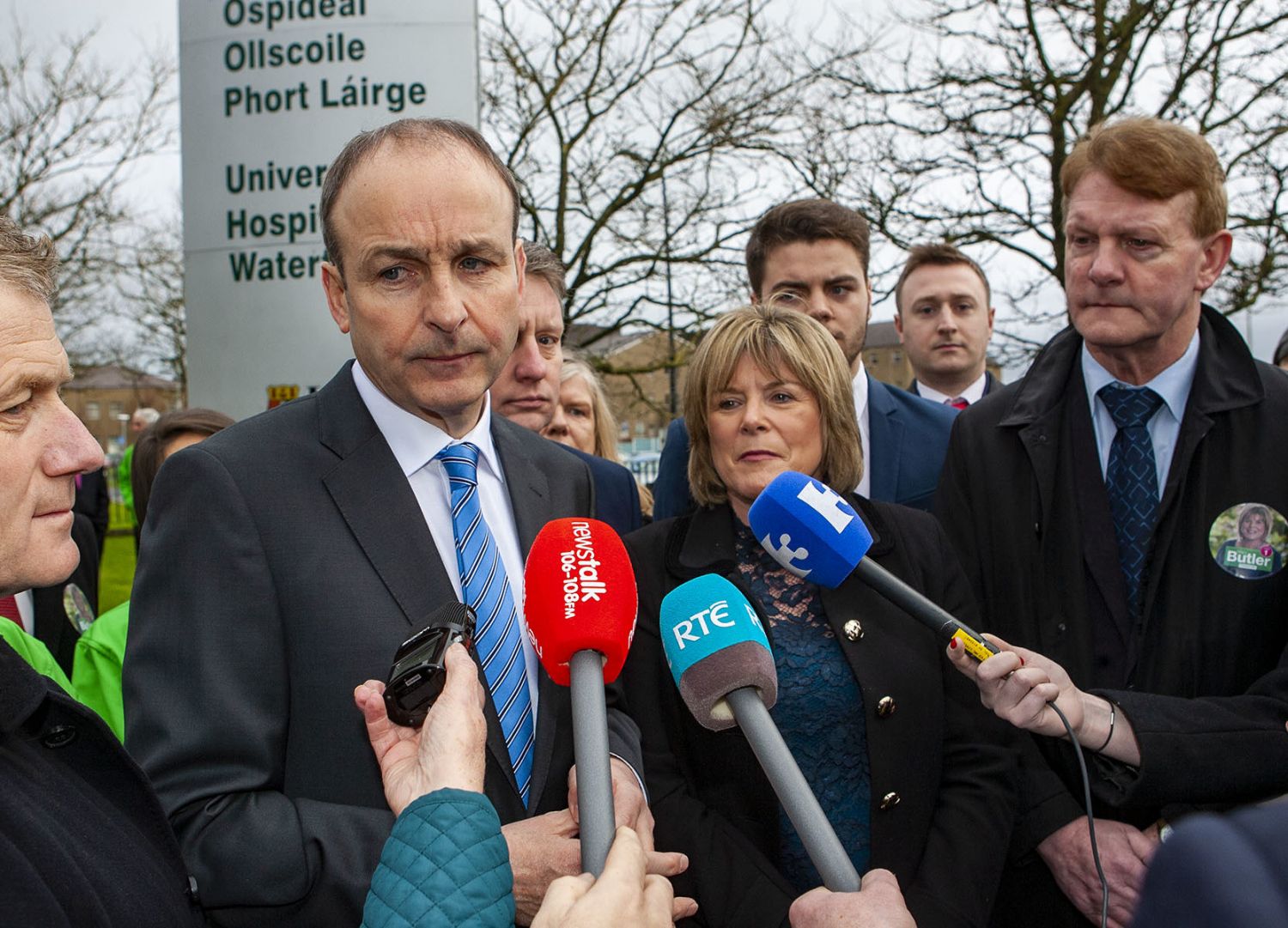 DARREN Skelton has reported here that SEPAG, the cardiac care activist group received a letter recently from health minister Stephen Donnelly’s office stating that the second cath lab will be completed and operational by September 2022 and “the preferred option is for a second Cath lab and associated 12 bed day ward (delivering six additional beds) on the roof of the existing Cardiology Department, which will operate five days per week and provide diagnostic services only”.

This flies in the face of the promise of a 24/7 PPCI service made by minister Mary Butler and Taoiseach Micheál Martin in advance of the last general election. The (in)famous photo of the two politicians standing outside UHW with a sign saying, “Fianna Fáil will deliver 24/7” will haunt them and FF if that promise is not kept. We will have two fully equipped labs next year and neither of them will be operating on a 24/7 basis unless Micheál Martin and Mary Butler make good on their 2016 promises and deliver the funding to enable recruitment of staff to provide a 24/7 PPCI service at UHW.

It’s still not known whether the new cath lab, currently being constructed over the existing lab at UHW, will carry out emergency cardiac procedures. Since the tender was awarded for the second lab, the Department of Health has consistently said that the second lab would “operate five days a week and provide diagnostic services only”. In February of this year, Fine Gael Senator John Cummins received confirmation from the South South-West Hospital Group CEO, Gerry O’Dwyer that the new lab will have the “same equipment recently installed in the newly upgraded existing Cath Lab and will have full interventional capabilities”.

Having the same equipment is obviously not the same as offering the service required. We have learned to our cost, the need to carefully parse the words used by the permanent government Sir Humphreys when any development in Waterford is involved. I seem to recall the UHW general manager Grace Rothwell being interviewed by Damien Tiernan on local radio last February and she said that recruitment for the staff necessary to advance the service to an 8am to 8pm, five days per week (a tiny baby step forward) would commence “soon”! What that means in HSE parlance is anyone’s guess, but my understanding is that nothing has been done despite a willingness of consultants to move forward.

Most of us thought last February that the commencement of construction and the statement of Ms Rothwell had put the matter to bed, but obviously the battle for resources goes on. May we assume, as ever, that resistance from CUH and UCC to any developments in Waterford is as determined as ever? Ms Rothwell seems determined to move forward but the heel of the Cork apparatchiks is very firmly on her and the appropriate resources. Mary Butler as a minister in the Department of Health should be all over this like a rash. Her political future and that of Waterford FF depends on it.

Thucydides (again) put the problem in a nutshell. “Strong cities do what they can, weak cities suffer what they must”. With the Taoiseach and two senior ministers from Cork, it’s open season for them on state funding. The government money hosepipe is flooding Cork and complaints from other areas, if there are any, are muted or not reported.

At the announcement of the new Economic Recovery Plan, Minister for Environment, Climate and Communications, Eamon Ryan, said the government is signalling a “major investment in metropolitan rail network for Cork” in what he called a “transformation of the city.” The plan will start today with a fund of €184 million, and the new commuter line is planned to run through Cobh, Midleton and Mallow, with plans to improve Kent Station. In time, new stations will be built in Tivoli, Blarney, Kilbarry and other locations. Ryan also said that a plan like this will also be done in Limerick, Galway and Waterford, as Ireland is using part of its €915 million in grants from the EU’s massive stimulus plan for Europe to fund the new rail works. It is extremely hard to reconcile this statement with the headlong rush for new greenways in the south east.

Waterford was historically the most rail-connected of all the regional cities, but lines to Dungarvan and New Ross have been dug up and the lines to Wexford and Clonmel /Limerick are under threat. Strong political advocacy has influenced the government to (rightly) fund the West on Track and reopen old lines in that part of the world, but the South East seems, in every sense of the words, to be subject to an entirely different dynamic.

The antipathy of Fáilte Ireland for Waterford city is deeply ingrained for reasons unknown. It’s almost as if they would prefer we didn’t exist and left south east tourism to Kilkenny. The latter town does a good tourism job, but what’s wrong with making the pie bigger and trying to get more visitors into the region? Readers will remember for reference, the map reproduced here some years ago published by Fáilte Ireland for the North American market where Waterford city was completely omitted. They now refuse to open the Waterford Tourist Office, despite it being adjacent to two new museums. FF councillor Jason Murphy and many others are incensed.

“The fact that the Waterford Fáilte Ireland information centre is one of the only Fáilte Ireland offices to remain closed is nothing short of contemptible. To have Ireland’s oldest city treated in such a disgraceful manner calls into question Fáilte Ireland’s commitment to the Ancient East brand,” says Jason.  It’s an insult to Waterford’s attempts to build a tourist offering. What would the reaction be if a similar policy was adopted in Killarney, Cork, Galway or along the Wild Atlantic Way? Interestingly, the Monaghan tourist office, in FG minister Heather Humphrey’s constituency, is currently open.

As we drift into the high summer there was good news on the jobs front with a big announcement from Bausch and Lomb of another extension to their Waterford plant. €90 million and 130 well paid jobs is not to be sneezed at. This follows the Hamilton Pharmaceutical deal with Eirgen and gives us hope that our offering to foreign direct investors is being pushed by the IDA. Development of embedded industry is a big part of the IDA story and B&L have been in Waterford for nearly 40 years.

While congratulating the company and its employees on their success, I am not alone in wishing that we had completely new industry announcements in order to spread the risk. The node of medical devices industry in Galway, pushed relentlessly by the state, has attracted some 50 big and small companies in that sector to the western city. It’s the prime example of what enlightened regional development can achieve and underlines the need for similar resources and effort to be focussed on Waterford and the south east where need is greater.

Maybe NUI Galway is the major attraction. Waterford has faced decades of relentless opposition in its quest for university designation from UCC and mandarins in the department of education. Meanwhile, the rush to get the TUSE over the line for January continues. The mountain of funding hinted at by John Cummins, Mary Butler, Leo Varadkar and others has failed to appear. WIT’s new engineering block and the purchase of the Waterford Crystal site have been slow walked to await decision by whatever new TUSE board appears. The political silence is deafening.