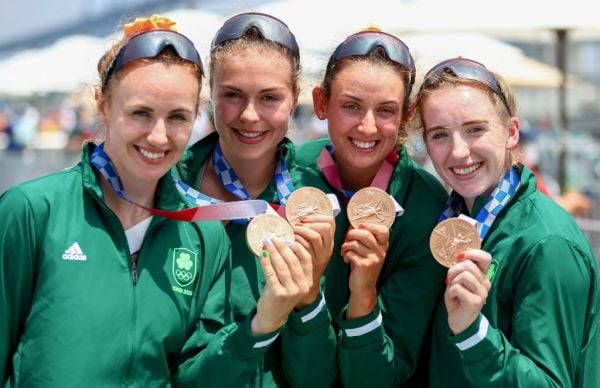 Indeed, it was a massive morning all round for the Irish rowers with a host of boats in action, with another stand out display coming from the Lightweight Men’s Double Scull of Fintan McCarthy and Paul O’Donovan, who dominated their semi-final.

Elsewhere, boxer Kurt Walker caused the upset of the day for Ireland as he overcame number one seed and reigning World Champion, Mirazizbek Mirzakhalilov of Uzbekistan in his Men’s Feather Round of 16 bout to progress to the quarter-finals.

It was a jam-packed morning all round for Team Ireland with both the hockey and the rugby sevens teams in action, while there was also more action in rowing, shooting, sailing and judo. 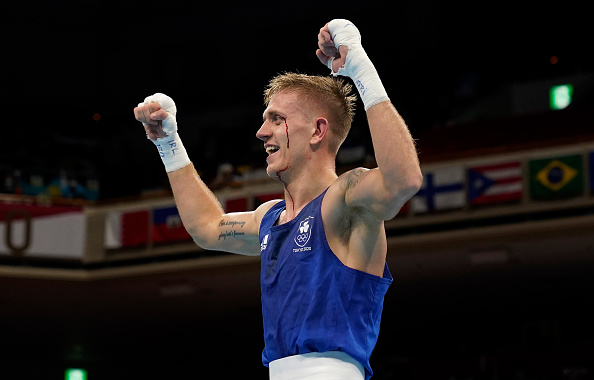 Ireland’s Kurt Walker was on hand to deliver the big upset of the morning in Tokyo as he defeated reigning World Champion and number one seed Mirazizbek Mirzakhalilov of Uzbekistan in his Men’s Featherweight Round of 16 by split decision to advance to the quarter finals.

An incredibly tough fight between the two saw Walker take the better of the opening round, as the pair tested each other on every turn, with Walker delivering some fantastic combos to put Mirzakhalilov on the back foot.

The World Champion was not going down easy though and sprung back in a relentless second round, with Walker defending extremely well and landing some key blows to hold a slight edge going into the last. 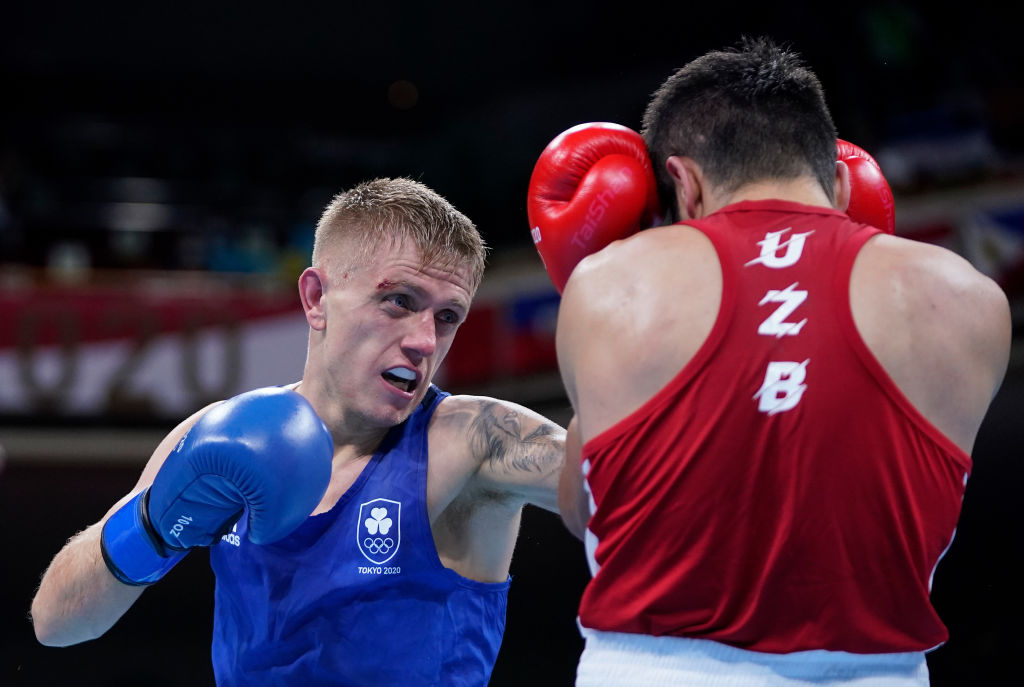 A superb third round display from Walker though saw him power through, upping his speed and intensity to tire out Mirzakhalilov, and pushing on to win the fight by a 4-1 split decision in the end.

Speaking afterwards, an ecstatic Walker said: “It’s indescribable. I just need to get my head level again and try and relax and recover, but I am buzzing!”

He added: “This will be hard topped. This is the highlight of my career so far. Biggest stage in the world – beating the champion of the world – a fairytale definitely!” 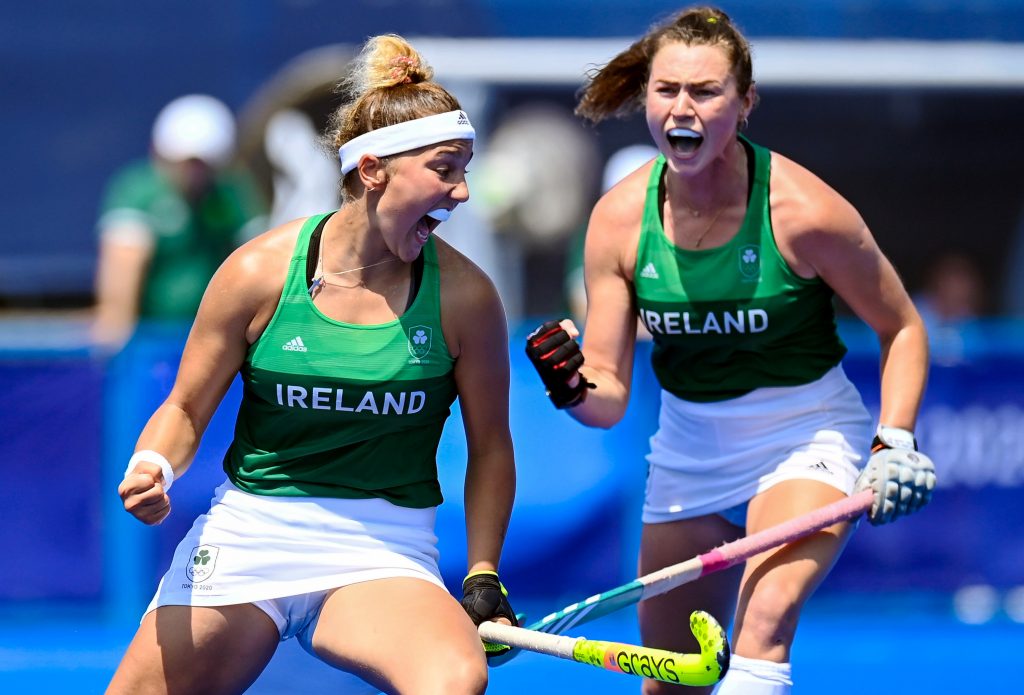 Ireland produced a big second half comeback but were just held at bay by Germany, who won out 4-2 in the end, setting up a showdown on Friday with India where a victory would likely bring a quarter-final spot for the Irish.

Germany – recently installed at second in the world – led 3-0 early in the second courtesy of a double from Lisa Altenburg and one from Cecile Pieper. But two corner strikes from Lena Tice and Hannah McLoughlin had the Green Army right back in the mix going into the closing stages before a contentious Francisca Hauke goal settled the tie.

Ireland now sits fourth in the group with two games to go with four teams advancing to the quarter-finals. 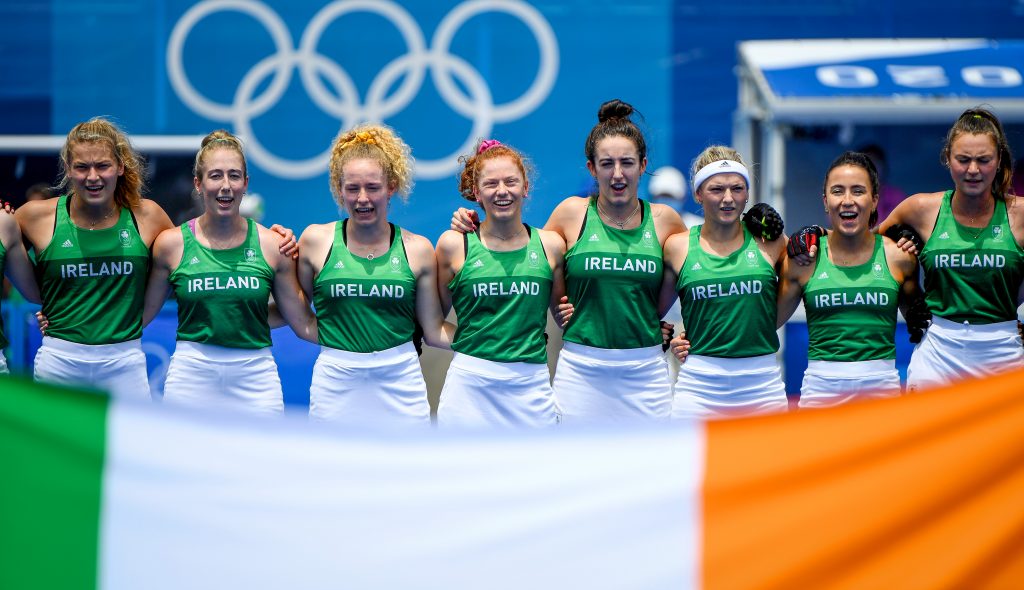 Speaking afterwards, Chloe Watkins said: “Games against Germany are always quite physical and they’re quite fun too, so I think we enjoyed that game. I think 4-2 is probably not really a fair reflection, we probably deserved a point if I’m honest. One or two things didn’t go our way but I think we played really well, we came up to it, they’re world number 3 and I think it was a really good battle, we matched them in a lot of areas.” 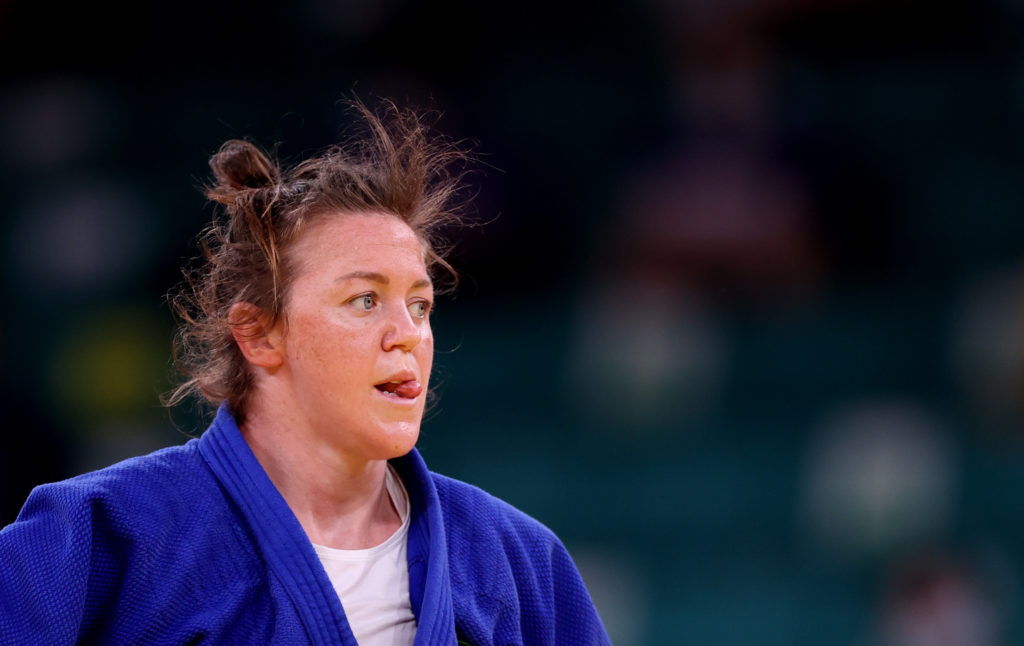 There was heartbreak for Irish Judoka and first-time Olympian, Megan Fletcher, in the first elimination round in the women’s 70kg this morning.

Fletcher displayed impressive skill and determination against Austria’s Michaela Polleres, but lost by Waza-Ari in the final three seconds. Both Judokas picked up Shido penalties in the opening 46 seconds of the match, with Fletcher picking up a second towards the three-and-a-half-minute mark.

As pressure was mounting, Fletcher closed the space and Polleres preformed a Ushiro-goshi – a waza technique that consists of grasping the opponent in a bear hug, lifting them, and throwing them down on the tatami, to result in a 1s1 – 0s2 win for the Austrian. 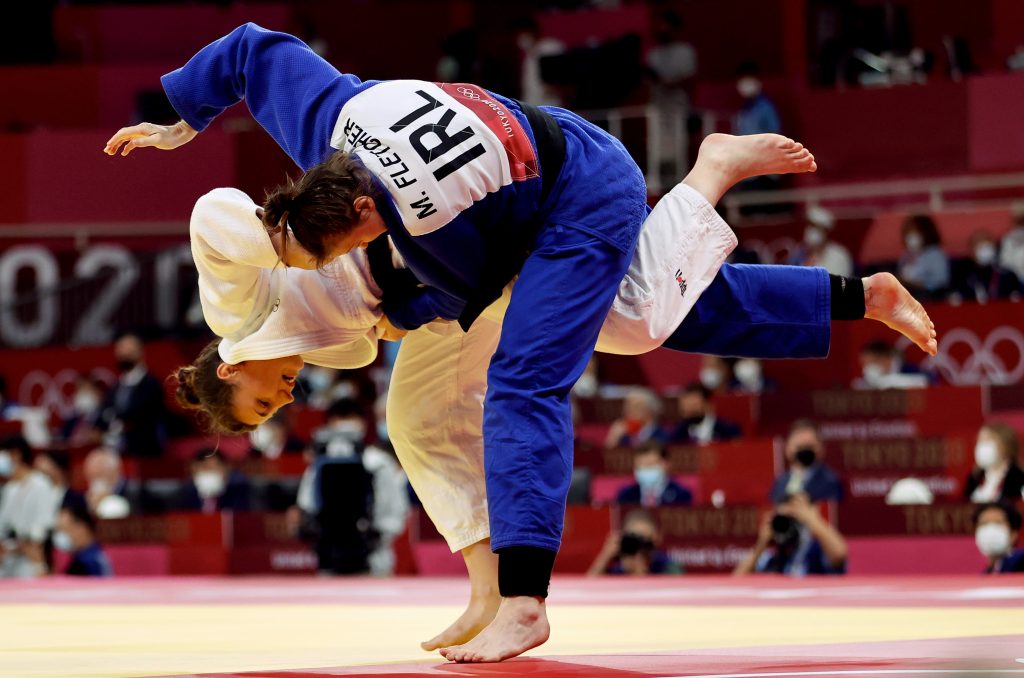 “It was always going to be a really hard contest,” said Fletcher afterwards. “It was a rematch from the bronze medal at the World Championships six weeks ago. For our entire careers, we have been having head-to-head fights. You have to be in the best position that you can, someone has to win, and someone has to lose. It wasn’t meant to be today. 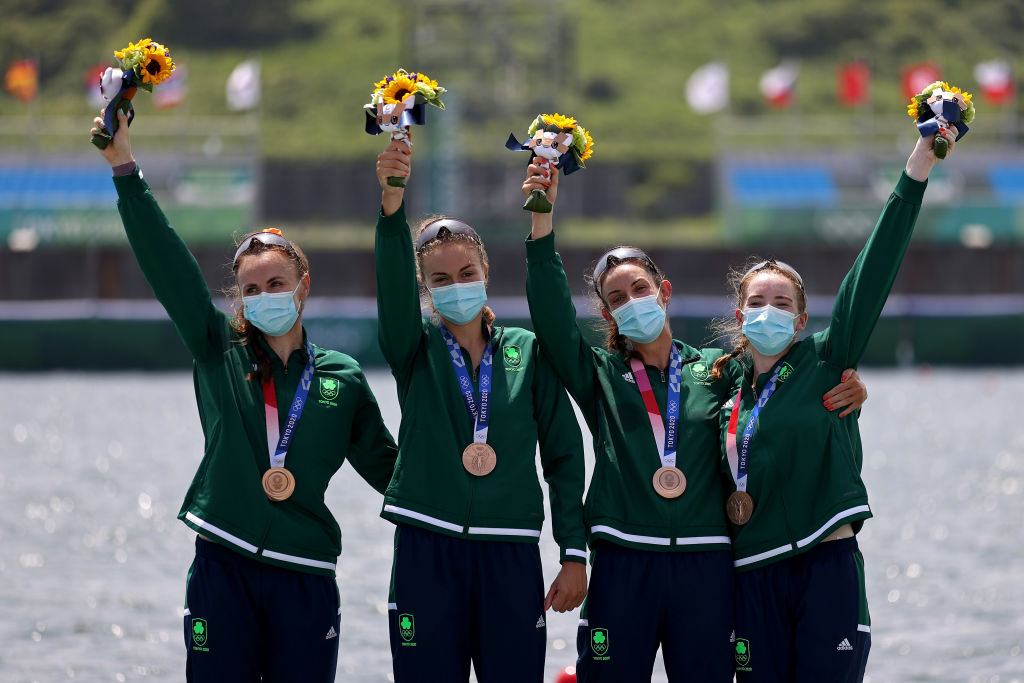 It was an incredible morning for Team Ireland, as the Women’s Four of Aifric Keogh, Eimear Lambe, Fiona Murtagh and Emily Hegarty secured Ireland’s first Olympic medal as they took home the bronze in style today. The quartet were lying fifth at the halfway mark and, as they passed the 1000m mark they pushed past China to increase the pressure on the GB crew, before passing GB in the closing stages of the race to take bronze in thrilling fashion.

The Australian crew – who they met in the heats earlier this week – took the gold medal, pipping the Netherlands who took the silver.

Speaking after the race, the thrilled Irish crew described the strategies they worked with: “The race was a blur really, it went by so fast. Eimear was calling our strategies out, and it felt like she was calling them early, but then I looked out and we were at that point. It was very quick. It wasn’t the best race, but we always say we want to be the best on our worst day too, and we pulled that off. 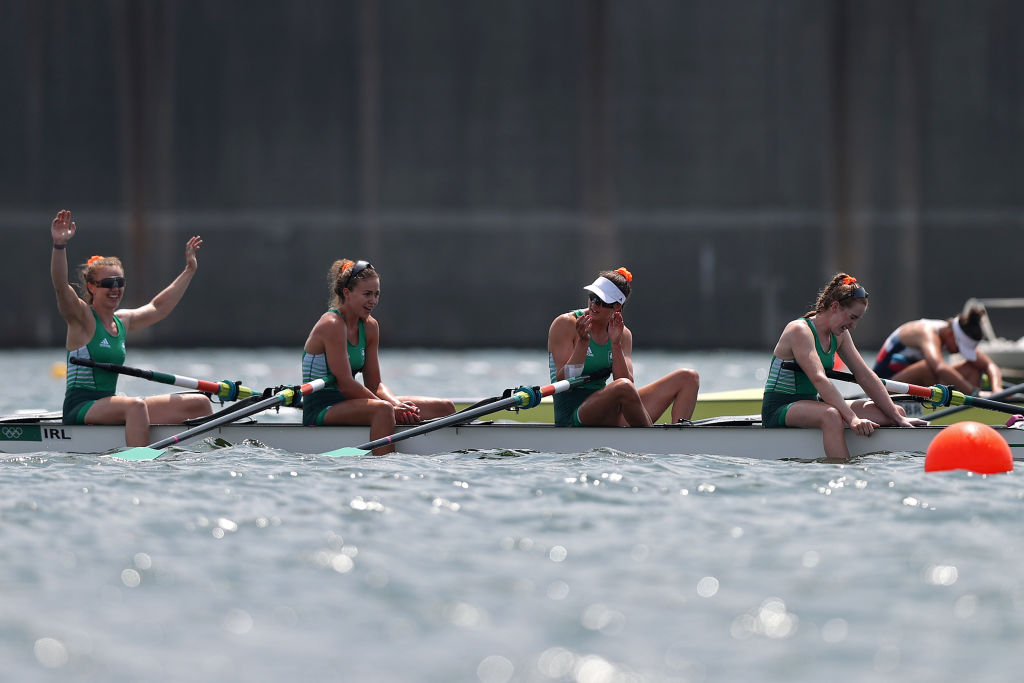 The team celebrate winning the bronze medal during the Women’s Four Final A. Photo: Naomi Baker/Getty

“We always know that the second half is our stronger part, so we tried to stay with the pack as much as we can, so at this stage their strategies are probably to put as much time into us in the first half. And they did that!”

The Lightweight Men’s Double Scull of Fintan McCarthy and Paul O’Donovan dominated their semi-final winning with a world best time of 6:05.33, two seconds clear of Italy, with Belgium taking the third and final spot in the A Final tomorrow.

Speaking afterwards McCarthy said: “We are happy with our race, the conditions were tough, but nothing that we weren’t prepared for. I saw the time when I finished the race, on the splits, but I didn’t want to believe it until we saw it after! Now we will just concentrate on tomorrow’s final. We expect a tough battle from the Italians.” 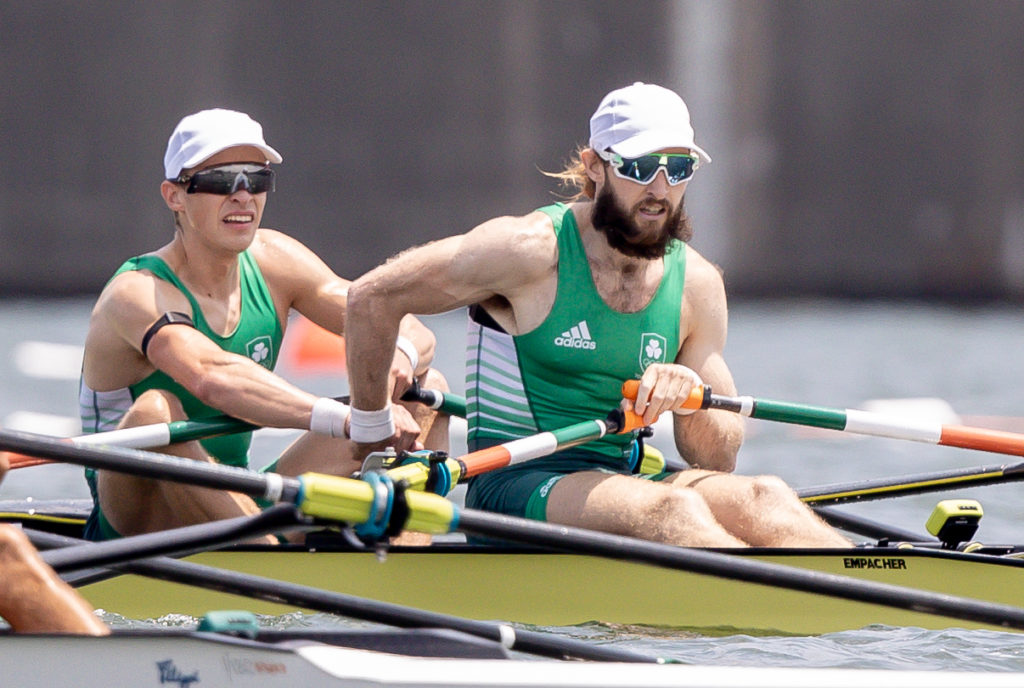 In the semi-finals of the Lightweight Women’s Double meanwhile, Aoife Casey and Margaret Cremen also impressed, pushing all the way for one of the three spots on offer, finishing fifth on the line with 6:49.24 and will now compete in tomorrow’s B Final. The Women’s Pair also will compete in the B Final after a fifth-place finish in their semi-final, in a time of 7:06.7.

Earlier on, the Men’s Double Scull of Philip Doyle and Ronan Byrne finished fourth in their B Final, resulting in a tenth overall finish place in Tokyo today.

The Irish duo had a fast start, holding joint second in the opening 500m behind the Russian Olympic Committee, with a tight battle for eighth place between themselves, New Zealand and Romania. On the line they were pipped by the Romanian crew into fourth in the heat, and tenth overall.

It was certainly a case of revenge is sweet for Kenya this morning, as they won out 22-0 over Ireland’s Rugby Sevens squad in the 9-10th place clash at Tokyo Stadium this morning.

The sides had met earlier in the pool stages, with Ireland taking the win 12-7 on that occasion, but Kenya took the game head on from the start, building momentum throughout the opening half to lead 7-0 at half time.

Ireland struggled to find their rhythm in the game and another Kenyan try with three minutes remaining in the game left an uphill battle for the Irish. Kenya were on a roll though and added two more scores in quick succession to seal the win and their 9th place finish overall, with Ireland finishing in 10th. 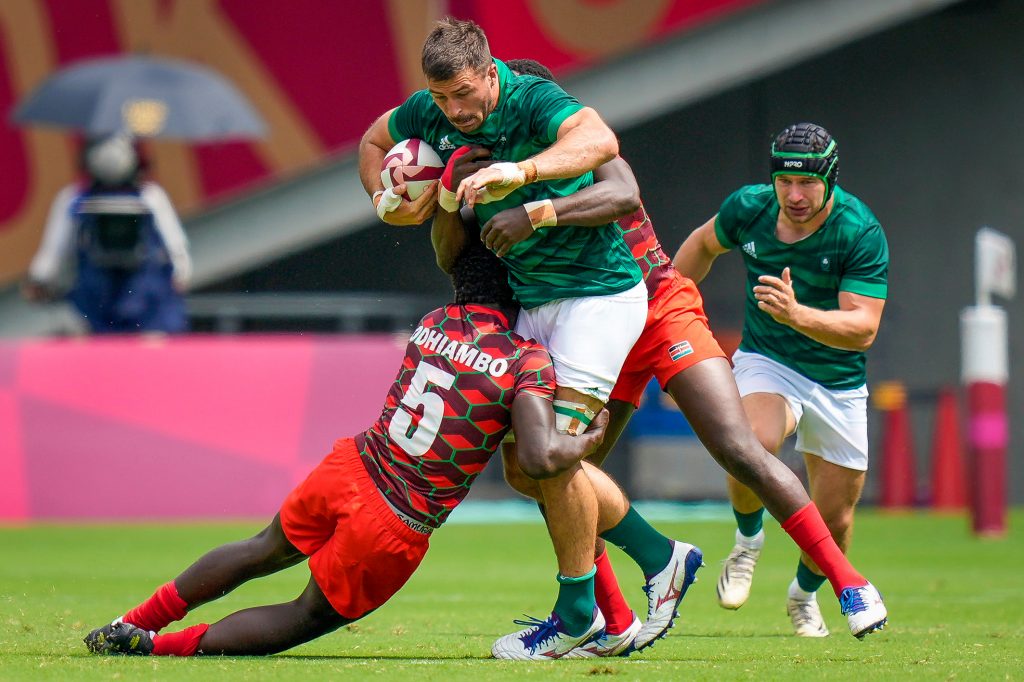 Speaking after the game, Ireland’s Hugo Lennox said that the team had struggled to find their feet in the tournament.

“I think in Sevens it’s so important to get out of the blocks quickly and get a bit of momentum. That’s probably something we look to implement in our game and it’s something we didn’t find all tournament, which is really disappointing.”

His teammate Byran Mollen acknowledged the disappointment while looking forward to future tournaments, adding: “We want to show what we can do, and here we didn’t show it.” Speaking of the potential of the group he said “We’ve got a really strong core group now including the lads back at home – a great squad at training, it’s just building now”.

Sailors Robert Dickson and Sean Waddilove were back out on the water today in the 49er class races, with Races 2, 3 and 4 already concluded this morning. The pair made their debut on the water in Race 1 yesterday, and with the remaining races of the day postponed due to the weather, faced into a busy schedule today.

The conditions were bright and sunny at Enoshima today, with good breezes. Strong sailing again from the duo saw them finish Races 2, 3 and 4, in 12th, 11th and 13th respectively, to see them now lying in 11th place overall.

Racing resumes for them tomorrow as, due to the postponements on day one, the 49ers will make up the races lost yesterday.

The Men’s Trap Shooting Qualification is underway with Team Ireland’s Derek Burnett featuring in his fifth Olympic Games. Burnett has a cumulative score of 46 after the first two rounds and currently sits in 26th position. The leaders lie four points ahead, posting perfect scores so far, with three rounds remaining in qualification.