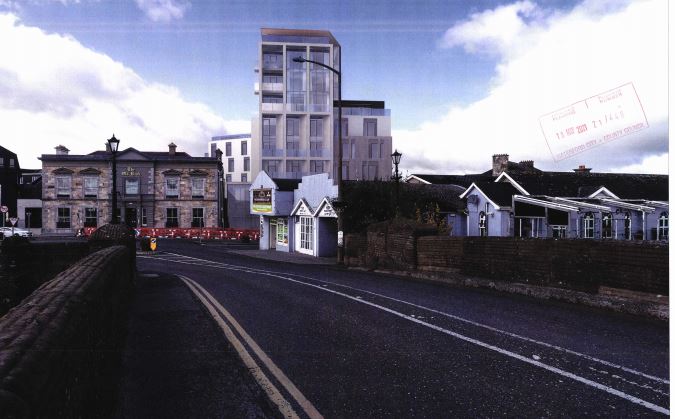 TWO highly-contested Dungarvan planning applications have been refused on the grounds of the preservation of architectural heritage in the town centre. Planning was refused for a 65-bed, nine-storey boutique hotel on the site of the existing Bridge House fronting Davitt’s Quay. The plans included a contemporary glass frontage on the high rise hotel including fifteen rooms with balconies, which was noted in the planning conditions as being “a visually dominant and discordant feature which would be excessively domineering from many vantage points.”

In refusing the application which was lodged by Dublin-based developer, Drummer Properties Ltd., concern was raised for the impact the proposed development would have on the architectural heritage of Dungarvan town centre and on the visual amenities of the area.

A separate application, which was lodged by Bowe, White and Nugent Ltd for a three-storey, 13-bed hotel on Parnell Street in Dungarvan was refused on almost identical grounds. The report which accompanied the refusal stated the opinion that such a build, involving the internal remodelling of a protected structure would be out of character within the Architectural Conservation Area. A concern was also voiced within the report by the Council that to allow the partial demolition and refurbishment of the existing building would set an unwelcome precedent for other protected structures in the area going forward.