IN recognition for their role in last October’s rescue which saved nine lives, the Coxswains of Dunmore East RNLI, Kilmore Quay RNLI, and Rosslare Harbour RNLI are to receive Bronze Medals for Gallantry from the RNLI. This is one of the highest awards presented to volunteers by the lifesaving charity. The crews who responded to the callour off the coast of Hook Head last October will each receive medal certificates. Recognition is also to be extended to the crew of the Irish Coast Guard helicopter Rescue 117, the staff of the National Maritime Operations Centre, and the Master and Crew of the tug Tramontine. 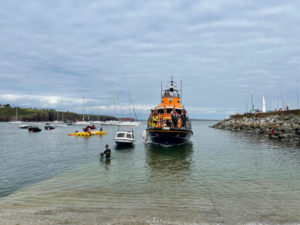 Lifeboat crew to be honoured include:

A statement from the RNLI said the awards will be made “for their fine display of seamanship and boat-handling skills in atrocious weather conditions, in securing a tow and determination to succeed resulting in the saving of nine lives.”

On October 20 last year, along with Rescue 117, the Dunmore East RNLI, Kilmore Quay RNLI, and Rosslare Harbour RNLI conducted a joint rescue operation off the coast of Wexford. Nine crew members were aboard the 100-metre vessel, the Lily B and carrying 4,000 tonnes of coal, she lost all power a mere two miles from Hook Head. Conditions that night in the sea were severe, with strong winds measuring Force 8, with gusts of up to Force 9. The Lily was in real danger of striking the rocks on Hook Head or of capsizing in the seas.

The rescue lasted for 12 hours in very challenging conditions for all. Multiple attempts to establish a tow between the lifeboats and the Lily B were made. Adding to the challenges of the rescue was a language barrier, and the inability of the Lily B crew to remain on deck for long due to the weather conditions. The rescue operation stood down after 12 hours at sea for the crews, having successfully bringing the Lily B back to the safety of the Waterford Estuary.